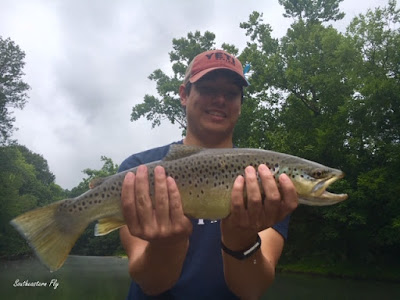 As all good restaurants go, The Hog Trough wasn’t the real name for this fine southern dining establishment. It was local joint named Wanda’s or Julie’s or something like that and it had a giant buffet. We called that place The Hog Trough because everyone would move down the buffet line with their plate and pile it high with a variety of fried chicken, mashed potatoes, breads, greens and mashed potatoes and the list of delicious Southern cooking went on and on. 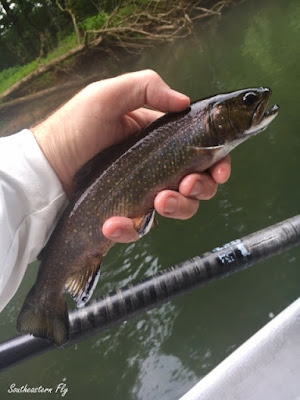 Naturally this was a while back and during my younger years, when I could eat whatever I wanted, without weight gain and I still had hair that was dark and there was still a lot of it. So it’s been a while.
I went by The Hog Trough several months ago and the building was still there, but the name had changed to something else I can’t remember. I imagined the buffet was still there and the food on that buffet would still be great southern cooking. You know southern like food all lined up, piled high and just waiting to be tested by some very hungry patrons.
Fast forward to last Thursday. Vince and Alex were on the boat and taking advantage of a father - son day on the river. We were floating across a long flat where there were plenty of rising fish. Just past the midway point of this flat a trough starts. 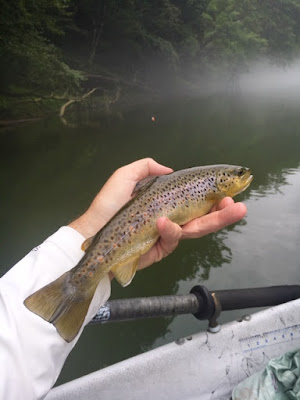 The trough begins as just slope that’s about 2’ wide and it drops less than a foot. It’s against the bank and there are a few trees hanging over it. Great cover. That foot-deep portion runs about two boat lengths (we measure just about everything in boat lengths and sometimes boat widths if we really want to be precise). This gives way to deeper and deeper water and eventually it’s about a boat width wide...precisely a boat-width. 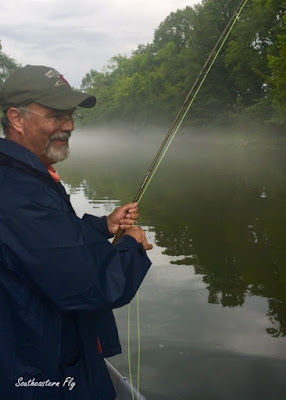 The trees along that bank continue to hang over the trough and there are some downed trees that are sunk here and there. Even more cover.
After Alex tossed that nymph in the feeding lane of the trough, he threw a mend in and we watched as the indicator slowed, then it began to drift along with the bubbles in the water. The perfect speed. The perfect dead drift. 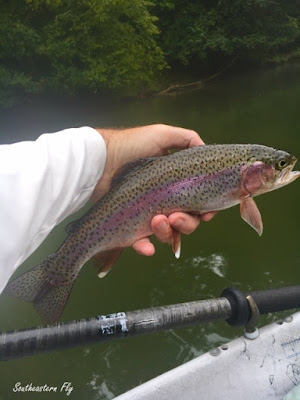 This particular piece of water is similar to the buffet at The Hog Trough. The trout’s food (although it’s not fried chicken) is funneled down the line. The fish will line up and pick through everything that’s presented correctly. If it looks like a bug, they will take a bite.

Anyway, Alex had a nice presentation with a good mend. Remember the perfect dead drift. The fly was floating at a good speed and then the indicator stopped. Alex lifted the rod tip and the fish came out of the trough right onto the flat. It was fast and the rod bent double. Alex commented on how different this fight was from the 12” and 13” browns we were bringing to the net most of the morning. This fish was quick but we had a good hookset with the fly lodged in the upper lip. Alex was doing a nice job staying with the brown as his Dad, Vince, looked on from the rear casting brace. It was a clean fight with some give and take by the angler and the brown.

We were looking at a quick fight with this fish because when it came onto the flat and made a couple passes it found a waiting net. See before it could get another head of steam for another run, Alex pulled the fish up to the top. The net was scooped and we scored a nice brown for the 20 + Club. The fight was enjoyable but in a record time. It was over before it really even started. 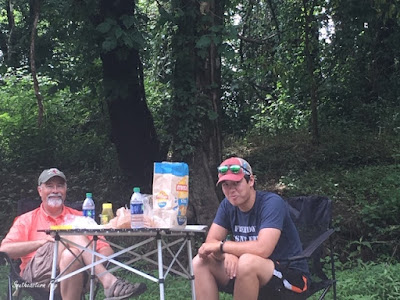 We grabbed some photos for the memories and revived the fish. It didn’t take long before the fish was kicking. The fish came out of the net and slipped under the boat. It was completely out of sight in just a few seconds. What a fish though.
With thunder and lightning looming we grabbed lunch and waited out a rain under some cover. The water conditions changed late in the day and we changed tactics as well as flies. The fishing picked up and we ended the day with a tally of decent numbers of healthy fish.