Post Thunderstorm on the Caney Fork
I guided Ellen and Curtis on the Caney Fork and what a treat it was. Ellen had fished before but not extensively, Curtis is a repeat client who is very good with the long rod. I have to say it was an extremely enjoyable float. We saw some sights that are not often seen, made lots of inside jokes and generally had a nice relaxing day catching fish. 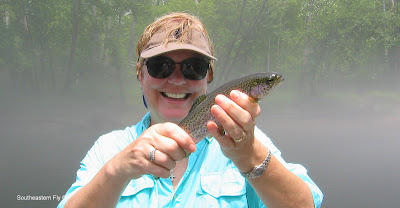 Ellen's First Fish of the Day
We unloaded the drifter from the trailer and then the storm came. We waited it out in the truck, while the drifter continued to fill with rainwater. After the rain slacked off, I ran the shuttle, only to return in another downpour. The drifter continued to fill with water and we were all getting soaked to the bone. The temperature cooled a little and the river turned off color from the run-off.
After a short explanation of the hows-n-whys of casting, mending and hook sets, we were off. Ellen struck early on a nymph pattern while Curtis picked up several on a streamer pattern. When Curtis switched to a dry dropper and picked up several bows in a row, Ellen was right behind him. After a quick bite we moved on. 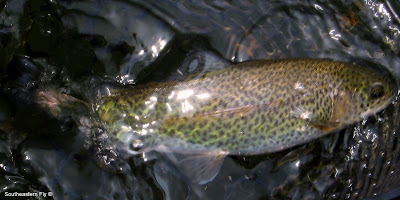 An Early Float Hatchery Brat
We rigged some high protein offerings and picked up some more fish on top. We spent a significant amount of time in the upper part of the float and then moved on. The traffic on the river was light and the people were friendly. Ellen is a former whitewater canoeist and got behind the oars for a section. She picked up on rowing the drifter pretty quick and we continued on toward the take-out and darkness. 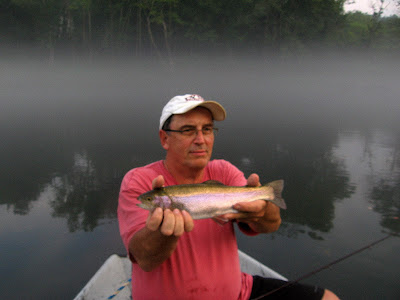 Curtis with a Tweener Rainbow

The early thunderstorm knocked down most of the bugs that flew earlier in the day. The rainwater run-off had stained the water, so there weren't many rises and the midge fall did not produce. Ellen continued hitting the skinny water on top, while Curtis went back to a successful streamer pattern and produced a tweener rainbow for our last fish of the day.

Re-Couping After The Fight & Waiting for the Get Out of Jail Free Card
The day ended and we loaded the drifter. Ellen had added several fish to her lifetime total and Curtis proved once again he is deadly with a streamer. The river fished pretty good on nymphs, streamers and on topwater. The storms soaked us to the bone, but they also cooled down what could have been a blistering float. We aren't done for the week and should have another report later. Thank you for checking in with us and hope to see you on the water. 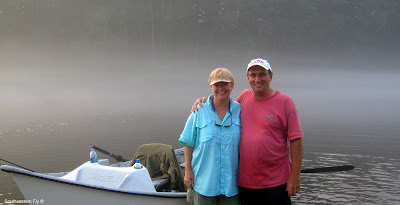