Between trips to the Smoky's and planning trips out West, Barry made time to get on the Caney for an afternoon float. The afternoon floats have become pretty popular this year. These floats are a good way to get out onto the water and they are more affordable too. For these reasons, along with the good fishing on low water, the afternoon floats seem to be a good value. 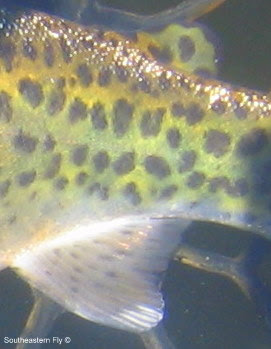 A Colorful Hatchery Brat
We launched the drifter among a large group of canoes. The canoes were not as numerous as past weeks and with school starting the multiple large groups are beginning to thin out. The water was still up a little, from the two hour release/sluice that pushed 10,500 CFS of water through Center Hill Dam earlier in the day, but it was low enough to make the fish active early and a good upper float. 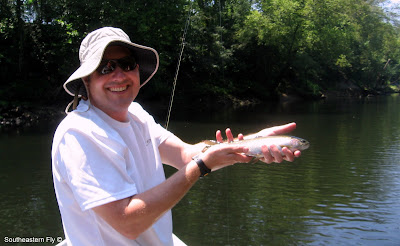 Tuning-up the Reflexes
Barry began the afternoon by hooking up with the hatchery brats early. We fished the big protein flies earlier in the float and were not disappointed. Well, we were not disappointed until a large brown hooked up, then jumped and made a clean break on 4 pound tippet. After his reflexes were tuned-up we turned our attention to the holdovers that were waiting. 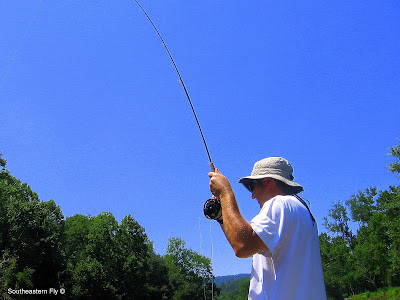 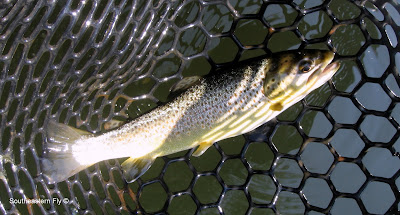 We were focused more on feeding fish for this float. When a fish would rise it would receive a drift from a fly shortly after. This method worked better on this float than some other floats this year. We continued on the pattern and soon Barry was in a fight with a holdover rainbow. 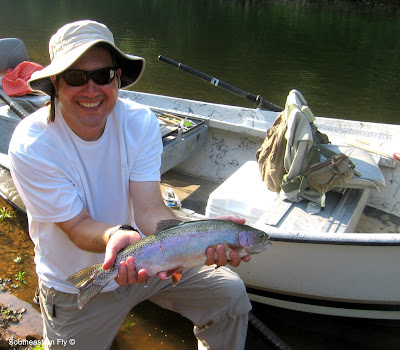 Once Barry was hooked up with the fish he got it on the reel and began to apply the side pressure. The fish tried to get loose and dug into its bag of rainbow tricks. No stump or downfall was off limits for this fish. Early in the fight the fish was going for the submerged wood and rocks at every turn, but Barry got the fish to turn it's head and then into open water. After some additional antics the bow made one last run under the boat and it then came to the net. This fish was a new boat record for rainbows this year.
Barry did the honors of releasing the fish and we continued on down river casting to rising fish. It was another good float for the drifter. The boat was on the trailer, the rods were hung in the truck and the angler, well he seemed pretty satisfied that he had squeezed a trip in between the mountains and the West. 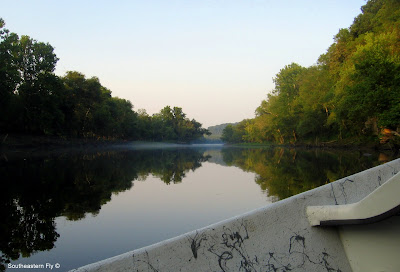