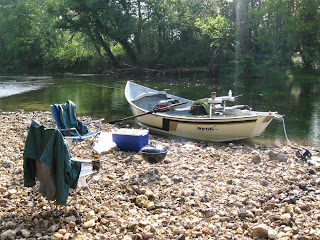 Mark and I left Murfreesboro just after 6:00 AM on Saturday. We dropped his vehicle at Ferris Creek then went up to the dam to launch the boat at 8:00 ish. The time was according to the watch I didn't have, so the time is somewhat fuzzy. We went passed the Bend Pool and hit the shute above the Scud Pool. Immediately we started picking up fish on BHPT, Dan-O-Magics and a bunny streamer. We caught several browns and rainbows through there and just below the shoals. We didn't spend a lot of time on this section of the river, because of the walk in access.
We passed the barn with Mark picking up other fish, also we missed a few. We found a section downstream of the barn and I picked up a few nice holdovers in the 11"-12" range, which are nice fish for the Elk. There is a long slow pool there, below some riffles, that holds a bunch of trout. I was back on the oars with Mark throwing to sunken logs, in foam lines and along shelves. He picked up a few more 11" - 12" rainbows through there.
We rowed a bit more and found a part of the river that will now be know, as Mark put it......."The Trophy Hole". There was already a Clacka anchored and fishing there, with a single fisherman from Chattanooga. The fisherman's name was Shane and he pointed out what appeared to be several 12"-16" rainbows, as well as a behemoth that looked to be well past the 12"-16" range. The behemoth was cruising the hole but was not eating at that time. After a nice conversation we moved downstream picking up several more fish and losing our share also.
My memories of the Elk have been river banks lined with river gravel, however now the Elk's banks are growing over with weeds. Apparently this years drought is limiting TVA's water release schedule and allowing the weeds to grow where they have not had opportunities to grow in previous years. The water was flowing at 170 CFS, which is a very good flow for drifting. Hopefully future generation will clean the banks and return the gravel bars to what they were before this year.
At 4:00 PM (again by the watch I didn't have) we finally rowed up to a bare gravel bar and our first opportunity to get out to fix our shore lunch/dinner. We set up on the gravel bar and fired up the Weber Grill. Mark had marinated chicken for approximately 24 hours and brought along some strawberries, which went well with our chips and drink. It was an excellent meal and made even better by our location. (see the attached photo).
We finished out the day picking up and missing a few more fish, before the torrential downpour came at Ferris Creek, while Mark was gone to get the truck. It was dark-thirty before we pulled out of the river access to head for home.
We saw a few canoes, another drift boat and even a three man raft. But, once we passed the barn the fishing pressure for the most part was non-existent. Very little fishing pressure is a good thing especially for such a nice Saturday in Middle Tennessee.
It was a long day of fishing and rowing, but a very nice float and a nice change of scenery. I got home about 10:30 PM. It looks like I may do one or two more floats down there this year. The fall would be a good time to float the Elk considering the scenery and even lighter fishing pressure at that time of year.
Posted by ____________________________ at 11:32 AM No comments: