This was supposed to be a somewhat lazy float. The generation was supposed to push us along and the oars would provide course corrections and only when needed. It was cold when we started. The first grip of the oars and two pulls later sent me digging for some gloves. It was cold. The anchor rope? Frozen to lowest portion of the floor. Not just stuck to the ice, the ice encased the rope by a good inch. It was cold and lazy wasn't going to keep me warm. 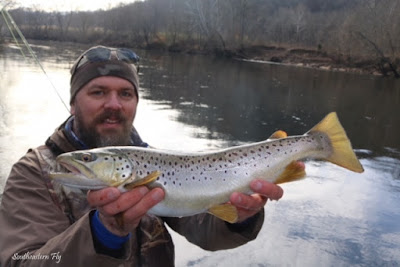 The eagle at the ramp looked overweight. It was "all puffed-up". Apparently eagles do this when the weather is cold. There were a few more boats launching at the ramp and we brought some fish to the net.  We would like to think we were giving the other anglers hope and inspiration as they pushed their boats off the trailer. But, the fish we were catching weren't big and probably didn't inspire anyone except us.

This was supposed to be lazy, but unlike the birds I couldn't puff up my feathers, working the oars would be the next best thing. This day was supposed to warm-up quickly. Warm-up is a relative term and "warm-up" can be cold in the winter.

Brent was tossing streamers. We settled on a size and color. Both were the same size and color that were on the rods on the last float. No sense changing what has been working. The water was pushing and the speed of the drifter was critical. Not too fast so as to pass by every fish before it could make a decision. But, not too slow that the anglers have to overwork the fly.

Brent's streamer was landing in all the best places and we had missed a just few fish. But, the next cast, we always hope the big one will come on the next cast.This time it was the next cast and the streamer was inhaled by a big fish. With the current passing by, I back-rowed to keep the fish downstream. Brent kept the fish in front of him and brought it to the net pretty quick. We guessed at the measurement and then put against the tape. It was just over 20" and once again Brent was in the 20+ Club. 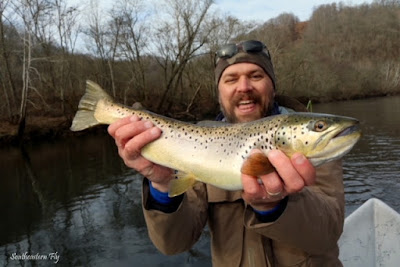 We continued the float and were ready to anchor on a likely shoal. Just as the anchor came to rest on the bottom, Brent began working the fly and hooked up again. This fish was close to the same size as the last brown. So I pulled the anchor rope, which was now thawing in the sun. The anchor came up to the anchor arm and hit with a thud. This fish needed to come to the net quickly, so we didn't pass the rest of this shoal. The drifter was headed for the bank and into slack water, inch by inch, while Brent kept the fish under control. The fish came to the net but not without a good fight in the swift current. This fish was another nice brown, but a little shorter than the last. We took some photos and put the fish back in the Brodin. The fish revived quickly and was soon back in the clear water. We watched as it ghost'd to the bottom and then completely out of sight.  The next several miles brought more fish, but nothing like the last two. Each fish brought a smile though and they all interrupted our lazy float. 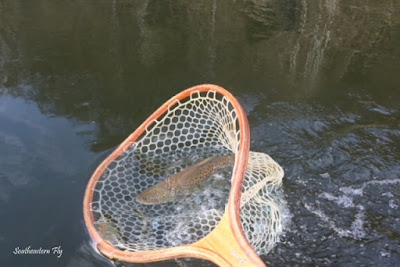 Ben Comes Back With a New Goal 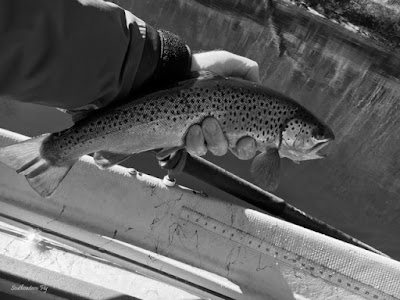 Last year Ben made time in his schedule to fish aboard the F/V Southeastern Fly. The fishing was good last year and Ben caught his largest brown trout. When we headed off to launch the drifter, Ben announced he wanted to catch an even larger brown this trip. That puts pressure on the man sitting in the rower's bench but at least we had a goal and knew the target. 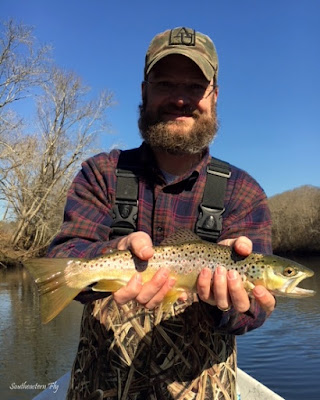 The day prior I was also on the river and couldn't buy a nice brown trout, certainly not a brown trout bigger than the brown Ben brought to the net last year. I promptly told Ben the same. Ben did not make a quick reply and right then I knew he was serious.

We launched the boat. Ben was fishing pretty good on this day. I was ask him to "put it right there" and he would. OK that's part of the fishing game and we scored early. Then we started scoring often and we were onto something. That something was brightening our day and bringing smiles to our faces.

"Toss it right there" would be heard throughout the day. "There's one" followed many times. Then, it happened. "Toss it right there" and then "it's a big one". Soon we were bringing the fish into deeper water without structure. Ben would be able to fight this fish without interference. Keeping the rod tip up with a good bend in the mid-section was the plan and Ben was doing a fine job. Soon Ben got the head up and the net was slid under the brown.

Ben said "This one should get me in the 20+ Club". So we measured it. The fish was close to 20", but try as we might this one was 1/4" short. I explained it was 1/4" short and Ben understood. We revived the fish. It didn't take long before the fish was kicking around inside the net. The hoop was lowered and the fish left us with some big smiles. This fish was close but not quite 20", but it was Ben's largest brown... so far. 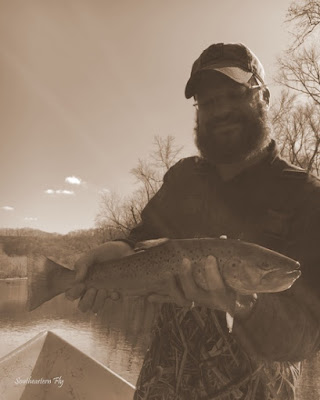