The forecast on Saturday called for rain and approximately 60 degrees. I met Jim Allen from and we discussed lunch. Because the float at the Elk takes all the light of day, this time of year, we settled for lunch of bologna and pimento cheese. Jim told me he had never had pimento cheese. A person with a passion for fly fishing needs to appreciate the finer points of pimento cheese like the pimentos; the mayo, the different cheeses, the list goes on and on. Besides pimento cheese is one of the necessities of a quality float trip as well as quality southern living. 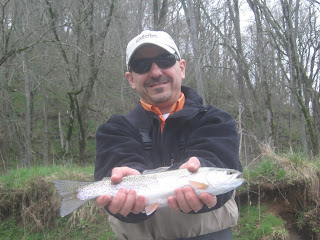 We arrived at the river at and headed out among moderate fishing pressure on the upper part of the river. Before we got to the bend pool we had removed the skunk with a brown on a Tutto. At the bend pool we boated the second fish with light rain coming down. We headed down river and brought out the streamers. Immediately Jim was open for business with several strikes and some misses to keep him honest. We stopped at my favorite run and pulled out a black Bugger. This fly caught the fish quality brown of the day. I tied on a U-Tube Streamer and on one cast we had a brown hit the U-Tube, come up out of the water and then come back for a second shot. The fish missed the point of the hook, but it was an exciting thing to witness.

Further down the river the rain became heavier, the thunder became louder and the lightning became brighter. We pulled over and anchored up to wait out the storm. After the storm passed we moved down to a nice long pool which produced a healthy rainbow. We parked at a run where Jim caught another nice rainbow on a Tutto with a miracle Midge dropper. The water was becoming a little more clouded due to the creeks after the rains.

Lunch time we downed a couple sandwiches with pimento cheese, added some chips and then we moved into the middle portion of the river. We boated two of the nicest fish of the day within 100 yards of each other. The first was caught on the U-Tube and the second was on the BHPT.

As the light began to dwindle we headed for the ramp at . We had to wait out one more thunderstorm on the way out and it was almost dark when we arrived at Ferris Creek. We were packed up and off the water by about

The Elk is in good shape. The light pressure down stream is giving fish a chance to recover from the drought last year and a chance to grow a little more. The middle portion of the river is still a great place to spend a large part of the day, but an angler needs to keep an eye toward the sun and not get caught upstream after dark. If you get caught on the river after dark make sure you have some of these to curb that appetite. 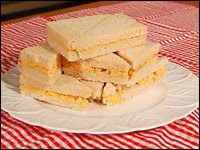 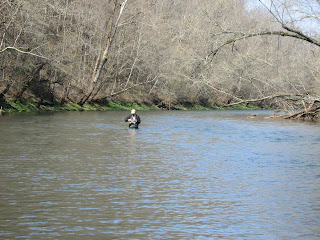