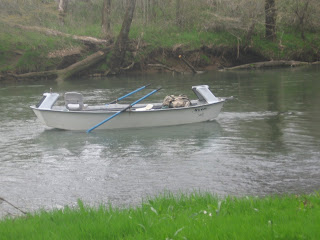 On Monday, March 31st, I went with Mark Roberts to meet Paul from Hyde Drift Boats. Paul was delivering Mark’s Hyde Skiff. After several minutes of conversation we left Paul who was back on the road to and his home. The conversation between Mark and I continued over lunch and evolved into the maiden voyage of his new skiff. We decided to take off Wednesday and break the boat in on the . I woke up at and began getting ready for a long day fishing the Elk. The trip is approximately nine river miles which includes some deep holes, small riffles and a lot of slow moving water. I made a quick stop for gas and coffee, then met Mark at the usual rendezvous point. We were on the road toward by

We dumped the boat at the dam and I went to meet Rhonda from Tim’s Flies and Lies www.timsfliesandlies.com for the shuttle. Rhonda and Tim Page run a local fly shop which has a nice selection of fly fishing and fly tying materials, on the square in

When we got back to the dam Mark was making adjustments on the boats oars. After a few minutes getting things where he wanted them we were off. We had the first fish in the boat by the first dogleg in the river. Before lunch we had several fish including the largest fish I have seen caught from the Elk the river. We won’t be showing the picture of the fish Mark caught here, but this fish is certainly a trophy brown trout. 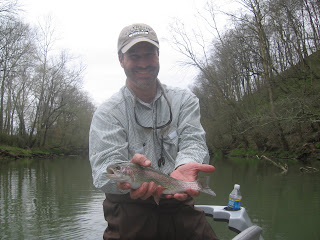 At lunch time, Mark prepared grilled Chipotle Steelhead with black beans while I did some phone business. Lunch was topped off with a cigar by the river and then we were back in the boat.
The final half of the day is when the water began to pick up more of the brown run-off from the rain earlier in the week. As we passed each feeder creek the water began to darken more and more. We did pick up a few more fish, but the catching was a little patchy. We made it to the take out and were off the water by

Although this trip makes for a very long day the scenery on the Elk is something to mention. There are hills, small waterfalls and people have described some stretches as western type rivers. 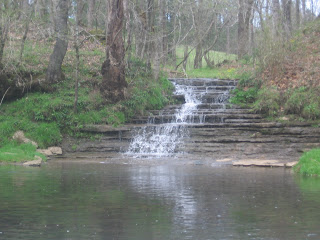 This was Mark’s day and a day he had been waiting on for several years. With a new boat and a trophy brown he was on cloud nine. We reviewed the events of the day several times on the hour drive back to the usual rendezvous point.