Jim Steps Into The Front Brace 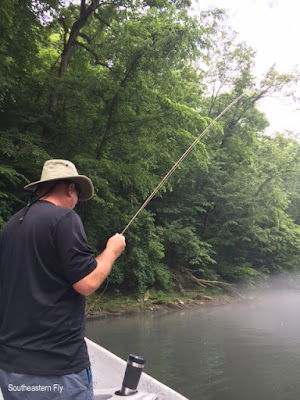 There are days on the river that just leave you with good memories. This was one of those days. Jim was given a gift from family, for a day on the river, to learn fly fishing. We met for the first time at the ramp. The weather was warm with a significant threat of rain. We were going to get on the water and just hoping the day would give us a good float and the weather would hold off until we were finished.

It wasn't long before we were coming into some soft takes, but the fish were eating so softly that commitment was in short supply. The fog was still hanging close to the surface and with coffee still warm in the cup, Jim set the hook and the fish that had once again ate softly, came to life. The fish made a fast run toward the boat as Jim tried to gain line. When Jim got control of his first trout, it had already spent most of its energy. The fight went quickly and soon Jim was lifting the rod and bringing the nice little rainbow to the net. From then until lunch we fine-tuned casting, presentation, and the fight. Oh and he brought a lot of fish to the net. 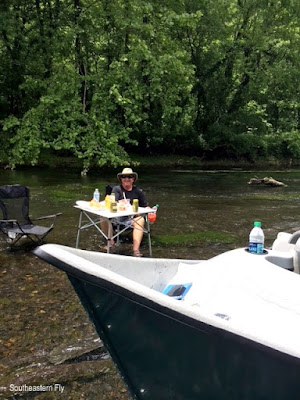 The usual gravel bars were taken and as lunch approached we were running short on space. So, we pulled the drifter out of the flow and just set the table in the river for our own quick bite. Summer in Middle TN is getting an early start and the cool tailwaters running over our feet were a welcome change. At one point Jim confessed he was hoping to catch at most just a few fish. We recounted some of the fish caught and realized he was deep into double digits well before lunch. That conversation has been common on many trips this year and the discussions on this day came easy between angler and gillie. Lunch was complete and clouds were beginning to push. We loaded the boat and moved on. 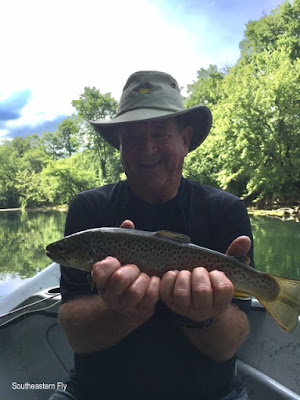 As the afternoon wore on, Jim was really getting dialed-in on the hook set. It was becoming more and more evident with each fish. Jim was dialing-in when he set the hook on a nicer fish. Was it the largest of the year? no. Was it a nice fish? Yes it was. Jim handled the fish like a veteran. Sitting on the rowers bench, the most impressive part of that fish was the hookset. It was decisive and stung the brown hard. It took a little bit of time, but Jim made the right moves at all the right times, then the slid the fish in the waiting net.

We finished out the day just a short time later. Jim was a lot of fun to fish with and responded to direction like a dedicated angler. This was a good day on the river that left us both with good memories. 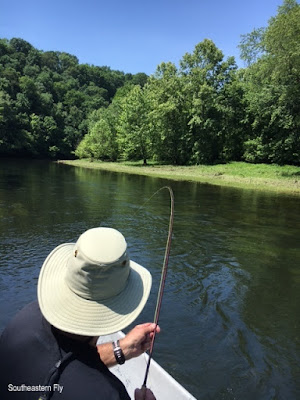