We headed out for some warm water fishing this week. We took the big rods looking for some toothy critters and took some intermediate rods looking for some smallies. The toothy critters did not cooperate, although we did have one get all-over a streamer pattern, but it didn't eat. I stopped by Cumberland Transit this week and made the mistake of talking with Leo and Grumpy about sunglasses. After trying some on and finding out they were on sale, I walked out with a new pair of Costa's. Look down the page and see the on the river test photos to compare no polarize to polarized. Next comes the in the water test.
Caney Fork River- After the rain last week the US Army Corps has turned up the releases. They are releasing a generator and the big sluice. The release is at 6800 cfs but the water is clear. Launching a boat on this release can be dangerous. I talked to a friend of mine who launched a boat and said it was so rough, water was coming over both sides as they backed out to get in the river flow. On this release, if you just have to fish, I recommend using the ramp by the Long Branch Campground. The water rips by this ramp, but the waves have settled down by the time the water gets there, and there is a back eddy that keeps things more tame on the initial launch. It is a good idea to wear a life jacket on this flow too. The water is clear and cool, so catching nice fish certainly isn't out of the question. I wouldn't get out there and we are not running any trips on the Caney right now.
The Elk River- This river is going through its Fall period. There is still some nastiness on the river bottom and the water has turned that green dingy color. This happens every year or at least since I have been fishing below Tims Ford Dam. The Elk resembles more of a freestone stream than a tailwater this time of year. There hasn't been a release in quite some time and the run-off from the feeder creeks can have a drastic effect on the water clarity in this smallish tailwater. The last rain event pushed some gravel bars around where the feeder creeks come in and that has changed the channel a bit. You may need to relearn the bottom structure in some places. Visibility is tough right now, however the water is cool and the fish are liking that cool water. Fishing nymphs is working and as usual swinging a soft hackle produces fish. Fall is upon us now and before we know it the streamer trips will begin. Stay tuned for upcoming reports...


The Elk River- The water in the Elk River needs a good flush and about 50 more CFS wouldn't hurt. The bottom is pretty nasty and wading means, find a spot and stay there until every piece of water you want to fish, is fished and then move on. Fishing and moving upstream helps with the nasty bottom scum. The water temps are still about 50 degrees at the gravel bar below the Highway 50 bridge and at Farris Creek bridge they are consistently below 70 degrees.
The fish on the Elk are still taking midges and nymphs. Swinging a soft hackle will work, but don't forget downstream fishing is a bit mucky (mucky- there's a fishing term). Hoppers are still taking fish but the numbers are not as good as we like (are the numbers ever enough?). We are still doing all day trips on the Elk and they are starting at 8:00 a.m. and ending just before dark. It is a long trip and a long day, but the results can be very good and the river has less traffic than others in Middle Tennessee.

The Caney Fork- The river is running clear and the generation throughout the week keeps the bottom clear. We haven't taken the temperature on this river in a while. We were down by the ball fields a few weeks back and the temp at 8:00 a.m. was 64 degrees. This reading was after the water had fallen all the way out. So the water in the middle and upper sections of the river should be real comfortable for the trout.  I will try to remember to take it on the next float.
We have been fishing nymphs a lot on the Caney and the hatchery brats have been responding real well. When anglers have gotten their share of "nymphing for stockers" we move onto sight fishing for trophy trout. Things don't always go our way, but on some trips everything falls into place and we get some nice fish to the boat. And, most every time we've had several shots at a 20 + fish. Right now is a good time to be on the river, the water is clear and the fish have been responding real good for us. Most others are reporting good numbers as well. Don't expect as many canoes, however the number of anglers has increased. Expect some company all along the river from the dam to at least Stonewall Bridge. We have a couple of open dates, for half day trips, with good generation left in September and a few in October. If anyone is itching to get out for some Fall fishing call, email or text to book your trip.

From Mongolia to Middle Tennessee

I was getting things together for this trip and stepping over one of our golden retrievers. So, I stopped and snapped the photo of a sporting dog at work....not. But drop a crumb and they spring into action. Anyway, back to the trip.  David flew in from Colorado to bring some of his songs to the folks in Nashville. David is an avid angler, has fished all over the world and told great stories about catching rainbows in Kamchatka, browns in Chili and taimen in Mongolia. What does an angler do when he has been fly fishing all over the world? Buy a working ranch with big trout. Brent booked a trip so he could spend some time with his Uncle. I picked them up and we were off to add another destination to David's list. OK, that was a joke please don't send me emails. But he really hasn't fished Middle Tennessee. 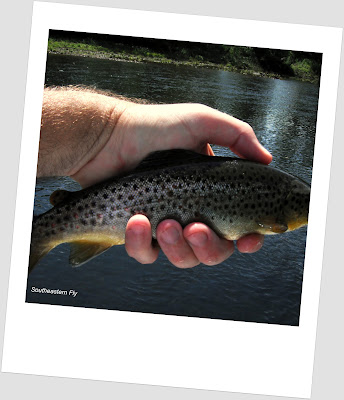 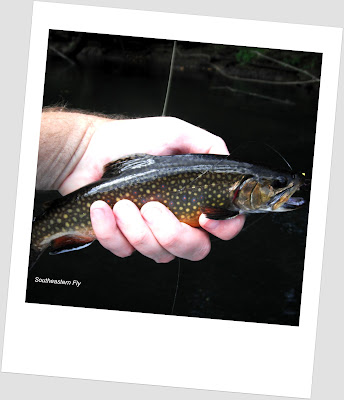 With Isaac churning and making its way North, we were trying to sneak the trip in between heavy downpours. We pushed the drifter from the gravel bar and as soon as we began to float, I swear, the clouds parted and the sun came out. It was unbelievable, but we believed it anyway. The fish believed it too and they were rising as far as we could see. David sat in the back of the boat and we watched Brent put on a clinic of nymph fishing. While David smoked a great smelling cigar, Brent pulled a fish from what seemed like every shoal and shelf in the river.

Brent fishes with me quite often so he knows the water. Brent was the perfect test pilot for a new bug I was wanting to try. It is a floating nymph and the fly caught fish right away, then another and then another. The fly still needs some work and a name, but it is already a proven winner. An hour and a half into the trip David finally picked up a rod and within a few casts with a hopper he was hooked up with the fish of the day. He never left the comfort of the rear seat and the rear seat in the drifter is now known as The Fighting Chair. We snapped the appropriate photos and then he sat the rod down and fired up another great smelling cigar.
We were throwing dries to feeding bows and Brent was in the front. We spotted a nice rainbow feeding on top. Brent went after the fish with a hopper. The fish refused several times and then turned on the hopper and  ate, but it wasn't a full-on eat and the bug didn't stick. We tried several more times and at one point the fish basically tried to sip a hopper three times in a row and never ate hard. You know when the fish crashes the fly and the fly sticks in the roof of the mouth. After that we found some more feeding fish and Brent hooked up with a pig of trout! This fish took a small caddis pattern and dove straight to the bottom. After a short fight the fish broke off. This is the second week in a row Brent had a pig break off. Needless to say his time is past due!
The guys were a lot fun to float with on the river. David had some really funny stories and some stories that make me want to get on a plane with a tent and a fly rod. It was a good day all around and there are a couple fish with Brent's name on them, all we have to do is make everything go just right next time.
Posted by ____________________________ at 11:48 AM No comments: