Brooke and Greg Back in the Casting Braces 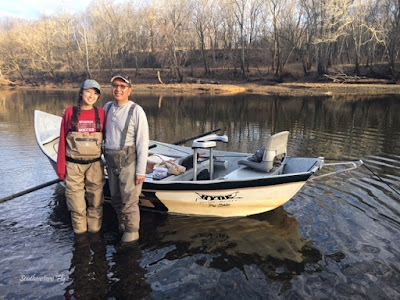 Fly fishing has been bringing Greg, Brooke and me together for several years. Brooke was on the first trip with Greg and the father-daughter duo have caught many-a-fish from the casting braces of the F/V Southeastern Fly. This trip would be a little different.

This trip would be different because we would be tossing streamers vs. the normal nymph rigs. This trip would provide Brooke with a chance to catch her first brook trout. We backed away from the ramp and with a few quick minutes of instruction, Brooke wound-up the streamer rod with sinking line and tossed the streamer. She strip a few times and the rod shook, then showed a nice bend. Brooke brought her first brook trout to the net. One cast - one fish. The next three casts brought two more fish. It was her first chance to fly fish with heavy sinking lines....and streamers, she is a natural. Greg was catching from the rear of the boat, but I think he was more pleased with Brooke's results than his own. 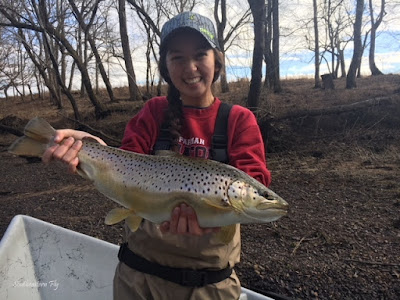 We passed several other boats and most were having a good day. It wasn't long before we settled into a groove, actually Brooke was in a groove. We stopped at several of the usual hot-spots with good results. We spoke with a few of the other anglers on the river and then stopped in a place that I like.

Brooke made a cast. One strip of the line. Two strips of the line. A few more and the fly rod bent. It was a big fish and it didn't show itself right away. A short time later the fish rolled toward the top and instantly we were all in motion. Brooke was doing what she could to keep the fish on the line. The fish was keeping pressure and the rod tip was going to the water. Brooke was taking instruction as best she could and there were a lot of things happening at once. The fish was doing everything it could to shake free. The alligator rolls just under the surface of the water were almost frightening. Brooke gave line and took line. The fish was taking line and giving it too. Brooke was going toe to toe. Finally we worked our way to the bank. Brooke was trying to lift but the fish was frankly just too heavy and the 6 weight just didn't have quite enough lifting power to assist her in getting the fish to the top. Once out of the boat the net was waiting. Brooke turned the head of the fish and then it came to the net. Boom, that just happened. She had the shakes pretty-good when it was time for the pictures. I was out of breath and Greg had a permanent smile. We took the necessary photos and the fish went back into the net and the net went in the water for an old fashioned revival. Measurements were taken for a possible fiberglass mount. We released the fish back into the the hole it was "fished out of" and just like that Brooke's day was made!

Brooke is the first 20+ Club entry in 2018. Also, she completed the first father -daughter duo in the 20+ Club. Brooke also "checked the box" as the youngest member of the 20+ Club. Nice work girl! 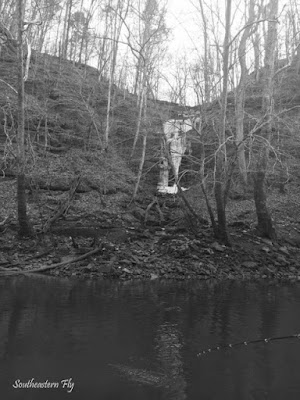 We spent the remainder of the day recounting the events of Brooke's fish, catching some more fish, mostly smaller, and generally enjoying another day on the river. Greg hooked up with several fish from the rear casting brace. We tossed streamers most of the day and most of the day those streamers were productive.

When the day was done and the drifter was loaded on the trailer, we left the river gravel bar with smiling faces. It was another good day aboard the F/V Southeastern Fly. Brooke and Greg are a true pleasure to have on the boat. I don't want to say the fishing was a bonus, because in reality the fishing is what brings us together. 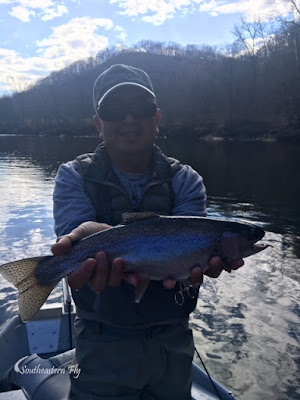