Back on the Bench 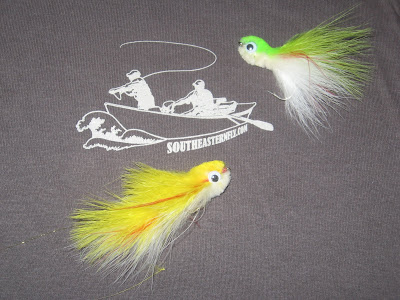 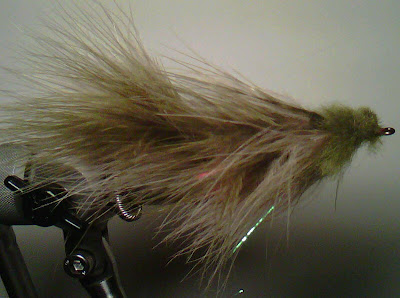 The Articulated Bank Maggot
This fly is named after some of the folks who prowl the banks with bait and fish for big fish to take home only to forget to clean them and let them go to waste... We figure anyone who gets made about the name is probably the culprit.
.
The Bank Maggot is about 5 & 1/2" long and is meant to fish from the middle of the river out to the boat (or wading) on a sinking line. The fly has lots of marabou and a sculpin wool head. There is a little flash in the body and the fly has a red hula skirt for flash when it breaks in the middle.
The Bank Maggot also has two 2x long shank hooks for length and intimidation of the smaller stockers.
Posted by ____________________________ at 7:43 PM 1 comment:

It is 20 degrees here in Middle Tennessee. Anglers are tying flies and dreaming of new gadgets for Christmas. Also, it is streamer season and what better way to celebrate cold weather streamers than swag! These shirts are part of the 2011 edition Southeastern Fly t-shirts. Available in Charcoal (shown below) and sand. 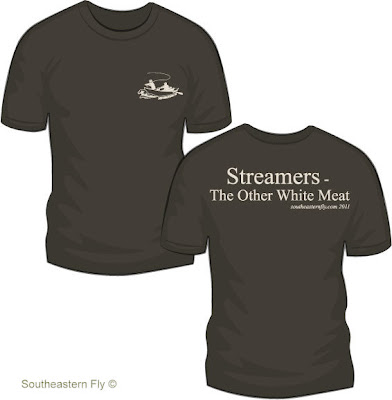 STREAMERS- The Other White Meat:

Small Fish Anglers need not apply! We fish, for the fish that eat the bugs, most anglers throw. That's right big fish chase big meals and streamers represent some of the best fishing on the rivers! These shirts represent an attitude that only a streamer angler can understand. To order just click here... Instead of shopping, today I slipped away, went on a tour of the Elk and spent some time in Lynchburg too. I stopped in the fly shop and saw Rhonda, picked up some stuff and caught up on the latest news. Then I circled the square, drove by Miss Mary BoBo's and the folks were lined up waiting to get in for some good southern cookin. The parking lot at Jack Daniels was about a 1/4 of the way full, so today might have been a good day for the tour. 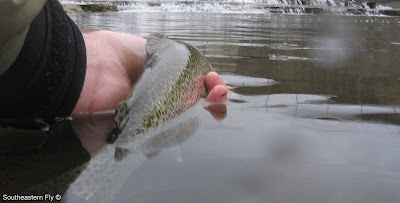 The Rainbows Sure Are Colorful
I checked some different stretches of the river and looked in on some old haunts from a few years back. Finally I got to a nice looking spot and layered up, because the temps were dropping. The creeks were running clear, but the river was stained from the discharge of the generators. The lake level is close to winter pool and the water is just simply off color. But, the fish were cooperative which is what I was looking forward to.
.
I also was on a mission to try out the new TFO-BVK 6 wt. A 6wt can be a little much for the Elk, but the wind was killer strong and the rod performed flawlessly. I did have to adjust the hook set a little and missed the first several fish then lost a couple more. Finally I adjusted and the catch was on. This rod will make a great hopper rod this coming season. 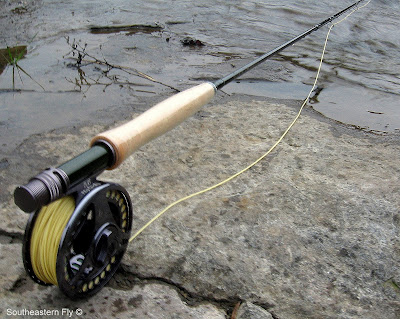 The Southeastern Fly 2011 Hopper Rod
The fish were feisty today and the first one came to a midge pattern that has been stuck in my truck visor for a year or so. Egg patterns worked OK when bounced along the bottom. The Fall migration of hatchery brats was on, with a nice fatty once in a while to keep things interesting. 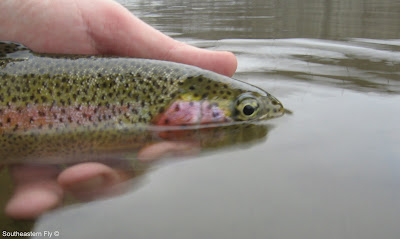 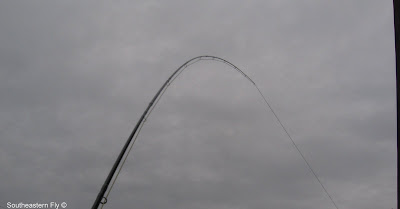 Under Pressure
The best flies were size 14 nymphs. I tried several different patterns from size 12 down to size 20 and the fish settled in on 14's. It is amazing how they can see a fly just a little different and key-in immediately. The joys of fly fishing are endless...
At the end of the day I tried the Fish Skull Generic Shad in some faster moving water. It had good action and worked well on a floating line, but it didn't produce the few times I launched it. I got away from the river just before the rains started. There were several other anglers around, but it appeared there was room for everyone. Winter fishing can be tough, but if you find one fish you can usually catch a few more from the same spot. There it is another report from the Elk. I have to say this was a very enjoyable day! 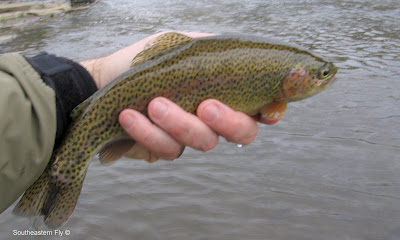 With the rivers blown out and the Christmas decorations complete, it is time to get on the vise for trips to the river. Below are just a couple patterns we will be using in the upcoming weeks. 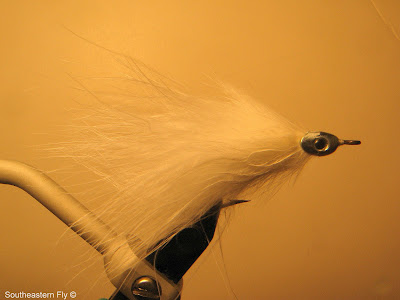 Fish Skull Generic Shad
I saw a variation of this pattern on a local message board. The head is a small Fish Skull. Daniel at Little River Outfitters "added these to an order" (said hey check these out) and I finally had time to put them to use on the bench. The white tail is marabou and the front collar is a white rabbit strip.

This fly should be productive on high water, from the boat with sinking line and good for wading, on falling water with a floating line. The head will break the water and the collar will give it a more full body that should push some water when stripped. There won't be as much side to side action, however the marabou tail will give it some rear end wiggle. If you tie and use it, let me know how it works. 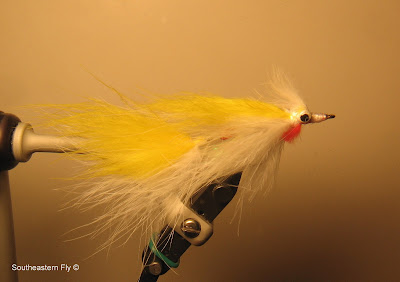 Articlutaed Thunder Rooster
This fly takes longer to tie and should be good for streamer fishing from the boat. For some tips on tying with articulation see Tying Articulated Streamers (just some basics) .
Add white marabou and yellow marabou to the trailing hook. Attach the rear hook to the front. Tie in the skirt with the flashabou and then add the white and yellow marabou to the front hook. Add some pearl eyes, to help get the fly down when it lands in the water. I added the eyes further to the rear, because big fish eat their food head first and to aid with keeping the fish "on" as they get closer to the boat. Add red marabou to the bottom and trim. The last material to add is the rabbit strip, tied in forward of the eyes and then brought over top of the eyes and secured behind the eyes. Whipfinish and then fish it.