Planes, Trains and the “Tutto”

Friday (the last day of November, 2007) found me on the water with Jim Allen of and Barry Huber of The temperature was 24 degrees when we launched from below the the dam on extremely low water then began fishing just a short while later.

Barry was the first to hook a fish, which was a rainbow that put up a good fight. The low air temperature seemed to give the rainbow extra spunk. We all know fish are weather-smart; and this rainbow looked as if it recognized we were moving a little slow due to the crisp air. But, Barry got the fish to the net which removed the skunk early.

The Army Corp released one generator of water at as well as a sluice for good measure. With 5100 CFS of water the drift picked up speed in no time. We floated to Where Cows Walk on Water. There we found some slack water, structure, and a lively discussion concerning Rodney Carrington songs.

We moved downstream, continuing the discussion along with our search for rising fish. Rising fish were few and far between. I like to say “with that much water coming downstream they were probably just dodging moss and trying not to drown”. We also discussed the train tracks that run along beside one part of the river. We talked about how the tracks are hovering up on a ledge, moreover how I had never seen a train along those tracks.

It was cold in addition to our hunger so we stopped for lunch of burgers & chips. We also enjoyed a nice camp fire that without Dan’s Shuttle and Wood Service we would not have been able to enjoy. We had one taker on a streamer just before lunch was ready, but the fish didn’t hang around and was long distance released soon after the hook-up. During our stop the water began to fall out to a more fish friendly level. Shortly, after that we heard a rumble, then a train came along the edge of the bluff. (See photo). The noise was loud but not deafening and the fish didn’t seem all that bothered by the extra activity. 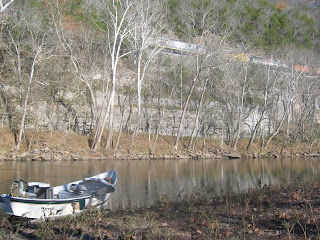 After the break for lunch we floated through one of my favorite stretches of river. It was still a little slow, but fish were rising. We pulled out a Sage rod and the fly of the day. The origins of this fly come from many long hours at the bench and lots of thought or as Barry found out from continued discussion, I tied this fly with everything that just happened to be lying on the bench one evening. We will call it a “Tutto” which is Italian for “Everything”. Catchy name huh…

The quote of the day came from Jim and soon after the third fish on the Tutto. “If I wasn’t such a nice guy I would be really mad at you”. Shortly after that, Jim was holding the Sage, a Tutto, plus his first rainbow of the day.

We found a good quality shoal that was holding a fair number of likely suspects. Barry and Jim took turns with the Sage/Tutto combo catching fish as we passed over the shoal a few times. On the second pass Barry and Jim both caught nice healthy browns as well as several rainbows. 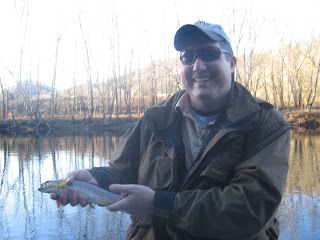 The sun was going down and Jim had a plane to catch back to , so we headed to the ramp calling it a day. Overall we probably boated a couple dozen fish. For the most part we caught them on a Tutto, but we did have some success with other flies. Most of our luck came late in the day, on low water, that was similar to the water we started on early in the morning.