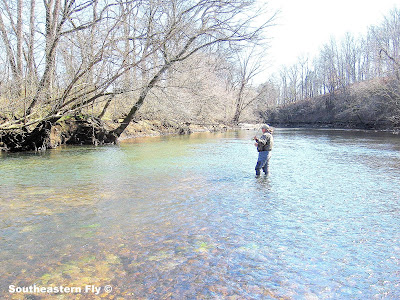 Anthony Works the Tail of a Run
We got out on the Elk River on Saturday and had a very nice day on the water. Mark and Anthony were on and caught a lot of fish throughout the day. Anthony kicked the trip off with a rainbow and brown before I returned from the shuttle. Mark came back strong with several fish in a row before we made it to the Scud Pool. 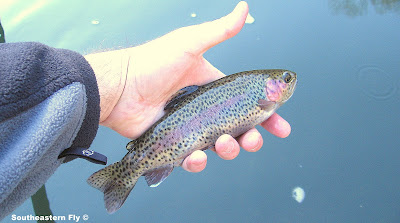 Nice Color on this Rainbow
This is the first time we have floated the river since all the rains and the big releases of water. The river is in very good shape and water was is as clear as I have seen it, in some time. The runs have shifted in many areas and in most cases have made some sections more technical than last year. This is evident more in the boat where you can look down into the water from a higher angle. 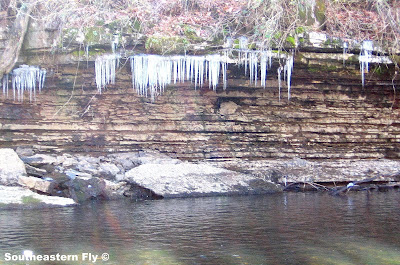 A Reminder of Winter
We caught bows almost everywhere we fished and the browns are still hanging out where they have been all along. The river has been cleaned up and it makes one wonder where "exactly" the fish hold when the water is released for weeks on end. The river banks are clean for the most part, which would make the walk to the Bend Pool easier. I may go check that out one afternoon and see if I can pass some time. 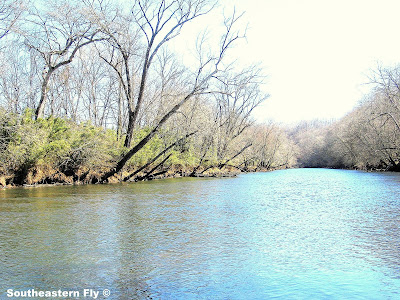 We fished the Caney yesterday. The generation was 7400 cfs and the water was stained at best. The water was high and expected. We had an extremely slow day, but the interesting part of the day was when we went up into one of the tributaries and checked out the run-off. The waters in the tributary were clear and we could see the bottom from approximately 4'+.

I also have hooked up with a guy who is supporting the No Pebble Mine campaign. For those who may not have heard there may be a problem in Alaska, please take a moment to check out some of the news on the mine. 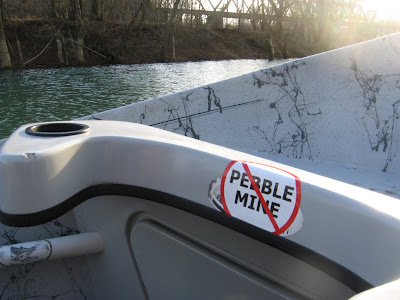 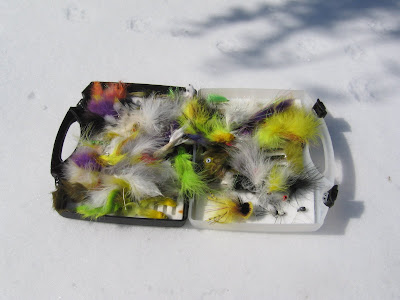 We have been traveling around for the past few weeks discussing the Monsters of Marabou. Showing anglers how to tie these large streamers has been fun and I decided it was time to tell a little more about how we fish them too.

Because it has been so cold and wet with what seems like constant rain and/or snow, this seemed like a good time to look forward. Summertime! Vacations and fly fishing on St George Island Florida....I want to go where it's warm.

Dan Sharley and I talked several months back about doing a podcast. We gathered up some material, sat down one evening and started talking about a couple of our favorite subjects. Hope you enjoy. 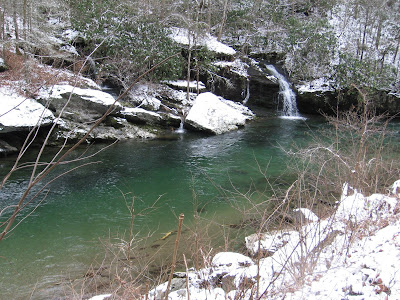 I managed to sneak away for a few hours of fishing this morning. I headed up Little River and fished a nice looking section in the park. Well aren't they all nice looking sections on Little River? I told my wife I wanted to try out my new shoe laces. I had to give an excuse to get out... So I laced up the boots and off to the park I went.
I fished about an hour and then got out the river and walked back to the truck. On the way back through the snow I saw another person walking and it was David Knapp. He was also up for the day and we had good conversation by the river. Then David spotted a nice fish.
We fished for the fish a while and finally spooked it. Then up the mountain we went, all the way to Elkmont. We were fishing a nice pool by the road, when a truck stopped, a kid jumped out, grabbed some snow, packed it, and through the snowball into the pool I was fishing. David told the kid his snowball fight with the pool was a bad idea and the kid moved on...rather quickly. 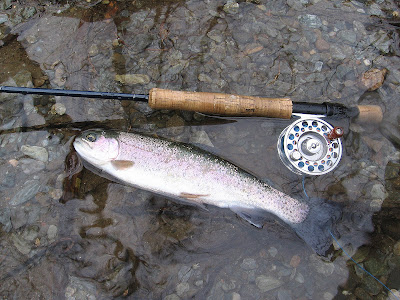 Streamers Work in the Park Too

David and I parted ways, but not before David said I should stop back by the fish and take another shot. I follow directions very well and soon was sliding down the bank. I tied on a white marabou streamer with a wool head and on the first cast the rainbow struck... Thanks for the help David and you were right, he did eat.

Snowy Day in Townsend & a Break in Generation 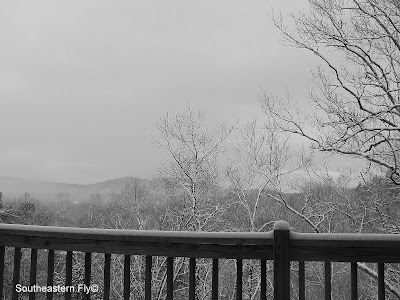 We just finished the free tying seminar at Little River Outfitters. It was a good day and as usual we met several nice people. Thanks Paula, Byron and all the staff at LRO for taking such good care of us. The snow continues to come down, but the roads are clear....for the moment. Tomorrow night and Monday are calling for additional snow, which will build on the snow that is already on the ground.
Surprisingly there are windows of generation on the Elk! Can you believe it? It seems like months since we have seen a break, but surely it hasn't been.
We came across the Caney yesterday afternoon and as much as I like to get out and do fun things in the boat, the Caney Fork on 18,000 + CFS is no place to be. It looks like several more days of high water and hopefully we will see a positive weather change before too long. 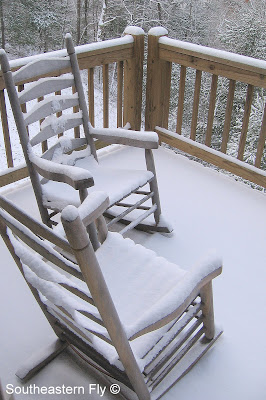 With even more rain the Army Corps and TVA continue to try to keep the lakes at winter pool. The folks who are trying to work on docks and other structures on the lake side of the dam (yes, they are counting on low water) are probably having a difficult time getting their work done. The snow and rain hit Middle TN last night, but they continue to try and drop the lake levels by running the generators 24/7.

The lake level at Tims Ford Reservoir is bouncing up and down, but seems to be generally headed in the right direction for the moment.

Dale Hollow Dam is releasing two and the water level in Dale Hollow Lake is going up!

Many thanks to Leo and Grumpy for having me up for a Saturday of tying. It was nice to get out and meet some of the regulars of the Saturday Morning Crew at Cumberland Transit and to make some new friends. We had many discussions of flies, materials, and of course we told semi true stories of the fish we've caught over the years. 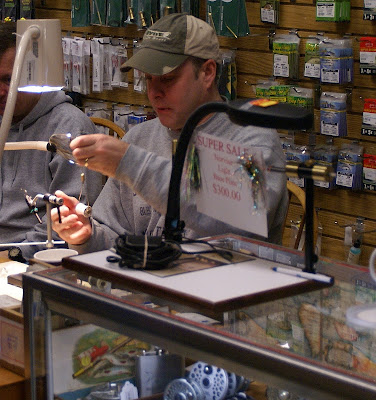 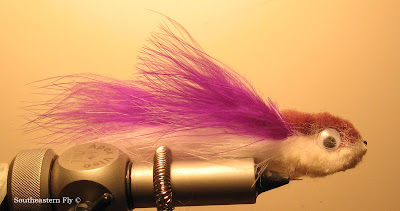 Over 10 years ago I visited LRO on a Saturday and spent the afternoon watching Tim Doyle tie flies of the Smokys. It was an enjoyable way to spend my day. Now, it is a privilege to go back to LRO and this time I will be sitting behind the vise.

We will be tying articulated streamers and hopefully can provide some pointers on how to tie these aggressive fish attractors. I am looking forward to meeting folks and putting names with faces. Oh, and since we will be there anyway, hopefully there is a stream around to fish for the late afternoon. Hope to see you there.