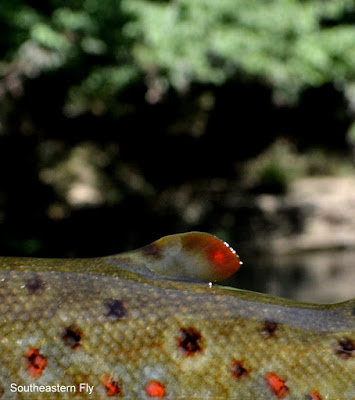 The weather was nice with clear blue skies and temperatures in the 70's. Those were the conditions when the first oar pushed the drifter into the slow current and we began our float down the river. Throughout the day the skies would remain clear and blue. But, the temps would continue their climb throughout the day and after lunch we would begin seeking the shady side of the river. 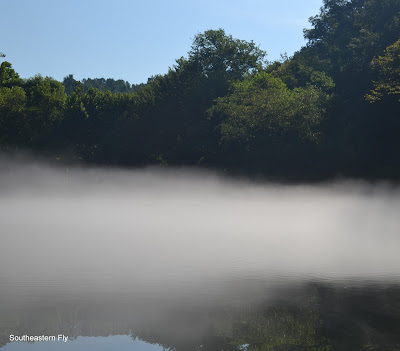 Stephanie had fly fished before but it had been a few years. As is usually the case with the ladies she would listen to instruction, ask questions when needed and begin to get a good loop right from the start. We worked a little on the mend and presentation, then she was setting the hook and bringing fish to the net. Eventually she would surpass her fish goal twice-over and then some. Stephanie was a good listener with quick wit and fun to have in the front brace for the day. 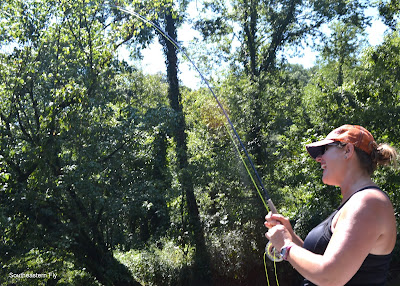 Blake was in the back casting brace. He is well known for his small stream talents. When others are struggling on the mountain streams, Blake has that knack for bringing fish to hand. We took some of the mountain stream skills and applied them to the tailwaters. It was only a short time before Blake was into fish and driving his count upward. Blake quietly put fish in the boat all day. 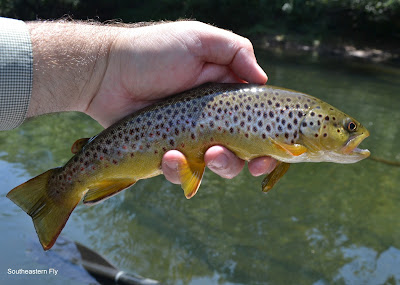 Our fly of the day was the nymph. The nymph is a fly that will catch nice fish when it is placed in the view of the fish. If placed correctly it forces the fish to make a decision. That decision is often to try the offering, just see what it tastes like. We tried the usual stuff and even went to super hero nymphs for a short time. As is normally the case, the usual patterns worked better than most and we began picking apart the various water types. 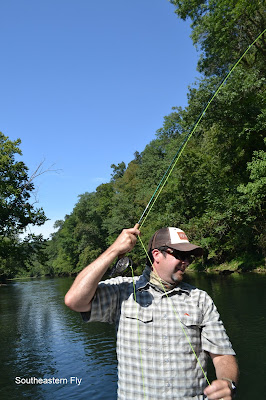 The rest of the day consisted of nymphing, good conversation and people watching as we passed and were passed by other watercraft. At the end of the day the weather was still nice with clear blue skies and temperatures in the 90's. Eventually Stephanie and the Ninja Warrior Anglers came to the take-out and that was when the people watching was best. As we listened to other anglers review their day we realized the early work we did on casting, mending and presentation helped to make our day possibly even better than we thought. 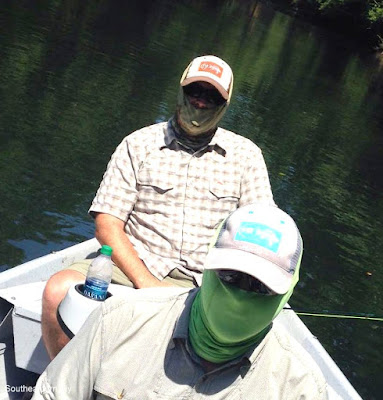 "Project Healing Waters Fly Fishing, is dedicated to the physical and emotional rehabilitation of disabled active military service personnel and disabled veterans through fly fishing and associated activities including education and outings." 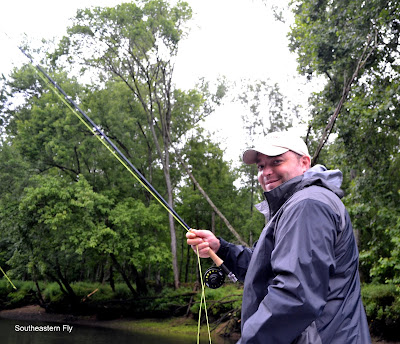 The Middle TN Project Healing Waters event is in the books and Middle TN Fly Fishers did an outstanding job again this year!  Fortunately, I was able to attend both days and guide a couple groups to some pretty nice fish. To get there I left the Elk after some good-time on the water. On the way I stopped by the house to clean the boat, tie some extra flies, and get at least a part of a night's sleep. After all that the drifter was hooked to the truck and I was making my way to Long Branch campground. 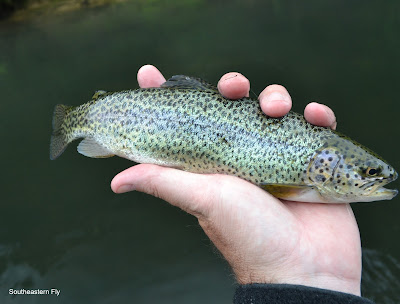 The topic of conversation that morning was the rain. The river looked like a bottle of Yoohoo in the lower sections. Stopping at the different access' the closer I got to the dam the better the water looked. The dirty water would put most of the boats in the upper section and the strategy would be to get in line and keep the right distance, while trying to put my guys in the right spots to catch fish. 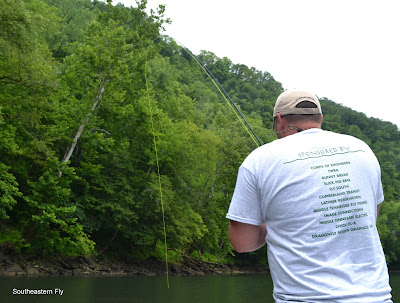 Darby and Josh would be on the drifter the first day. We managed to get going at a good time, make our way through the canoe and kayak hatches, then found a good pace to keep us in position to stay pretty much to ourselves. The boats spread out and the guys began getting into fish almost right away. 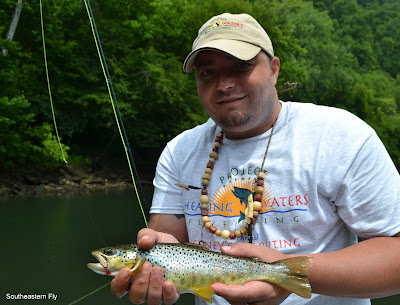 At one point during the morning it rained and it rained hard. The rain was coming in sheets across the river. In the words of Forrest Gump " Little bity stingin' rain...and big ol' fat rain. Rain that flew in sideways". Most people pulled to the side and tried to find cover. We kept fishing and brought some nice fish to the net throughout the downpours. Then the sun came out and so did the brown trout. There were some pretty decent fish eating our flies as we tried to keep pace and pull aside when needed. 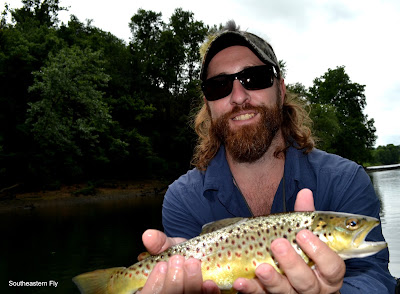 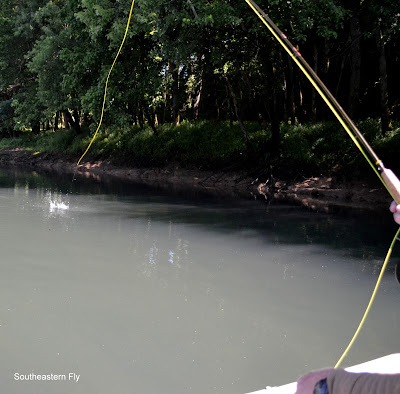 The weather, the fish and the company made this day pretty darn enjoyable for me. The guys learned to slow water nymph and brushed up on their casting skills too. Depth was the key to the bite good. We adjusted our share of indicators and lost our share of nymphs. That's normal when fishing these conditions. The guys returned to the event grounds and explained the fish and events of the day. Their friends were in somewhat of disbelief. So just to help them out, guys here are the photos to assist with any further discussion.  As my uncle says "bring the camera David we are going to need proof that we went fishing"... 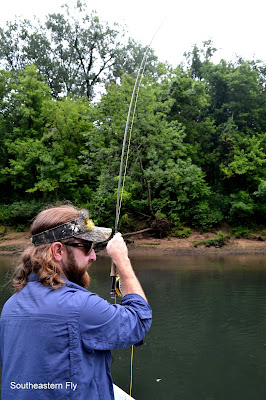 After a pretty good night's sleep I was back at the event and loading up for day two. Walter and Tom would be my anglers for the day and we would be among the first on the water. While the other boats were getting a shove off the trailer, we were slipping away form the gravel bar to begin our float. Hydration would be the key on this day and we went through some large amounts of water. The sky was clear and the sun was bright. 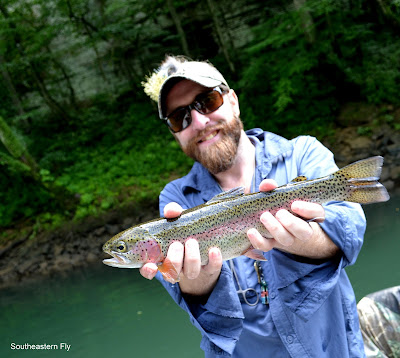 Walter had never had the opportunity to fish the fly rod. So, for the first hour we worked strictly on the cast until he could get some distance. Tom is an accomplished angler and we worked on presentation. It wasn't long before Tom was bringing fish to the net and was bringing smiles to the boat. 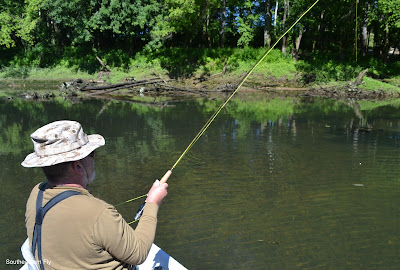 Walter dialed in a decent cast and when he set the hook it his first fish on the fly and the boat's first double of the day. We kept fishing nymphs, but also added midge patterns fished along the shoals. Both presentations are similar and the addition kept the results coming our way. 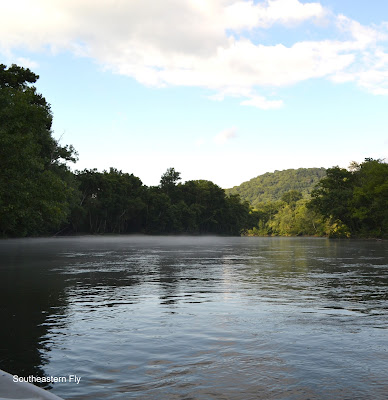 The heat of the clear skies began to take its toll and we moved the drifter to the shade with every opportunity. The fish kept coming in all the high-value areas, but only with the correct presentation. We kept working on presentation and when it was correct the fish would respond nicely. 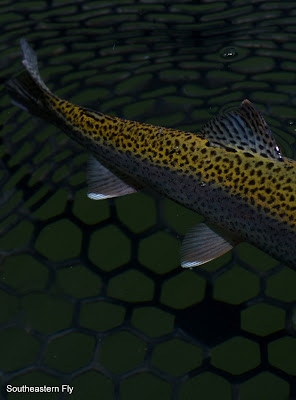 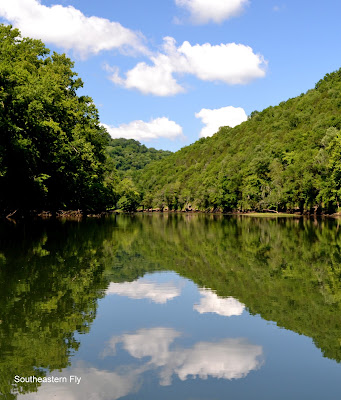 We made a break for the takeout and arrived before any of the other boats. Tom really got tuned into the presentation techniques we worked on and the fish tuned into his offerings. Walter learned the long rod is not all about standing in the river waving a stick and was able to catch his first fish on the fly. The day was another good one and with the drifter on the trailer we headed back to camp.

Two days of challenge and fun. That is my best description of the event. From heavy rain to sunny skies we brought a nice number of fish to hand while helping do a very small part of making this event another success. 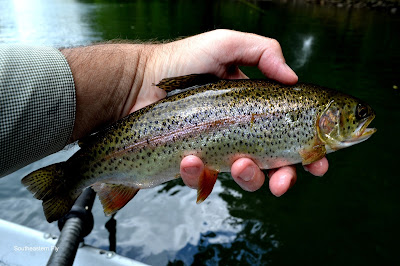 Elton and David- Another Day on the River 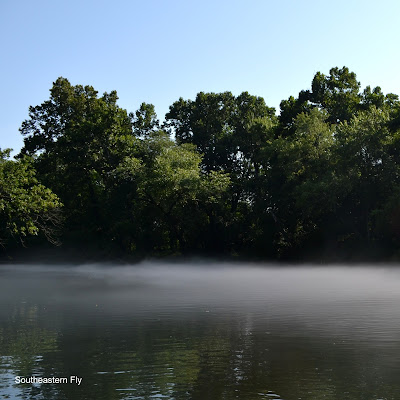 Another day on the river for Elton and David. These guys get out there and enjoy a good day of fishing. On this trip we would keep our eyes peeled for the terrestrial bite. but that bite didn't show like it did the last trip. So, Elton and David cleared the fish off the bottom with deep rigged nymphs at practically every stop. These guys really know how to fish and since we have been fishing together for a few years we both know each other's routine. Getting comfortable with fishing partners allows anglers to get into the groove just a little quicker. Fly choices, seeking good water and taking the good with the not quite as good are all easier. On this day the guys were into some good. 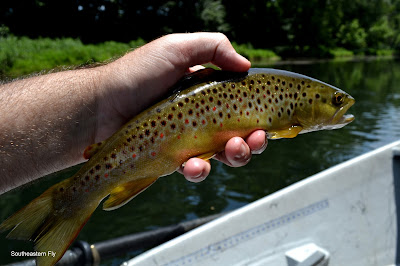 The browns made their appearance on a regular basis and have been doing so over the past several weeks. Elton and David were both ready for whatever the river gave us and we netted our share of browns. This size brown was fairly common on this trip. 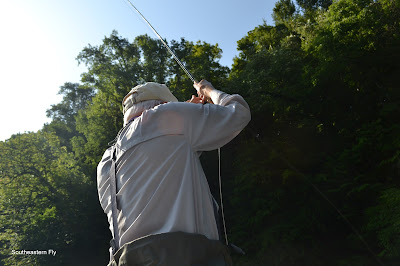 Elton was hooked up often, as is usually the case, and David hasn't been shy about catching his fair share. Elton is a good technical angler and spends part of the day fishing the right spots and the other part of the day bringing fish to the net. Both anglers get good drifts, which makes the guy rowing one happy dude. 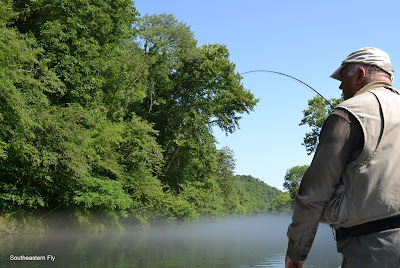 Adjusting the depth is critical on the current flows. The Summer flows can be a little higher so adding distance between indicators and flies is our summertime norm. The fish are looking real healthy with good color and scrappy fights. A lighter rod is fun but make sure to bring a stick with good backbone or the landing time gets a little longer than we like. Elton's Winston had just the right stuff, putting the right bend in the rod with enough backbone to get the head of the fish up at the right times. 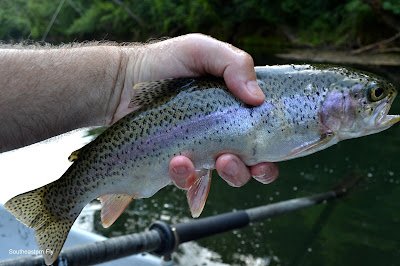 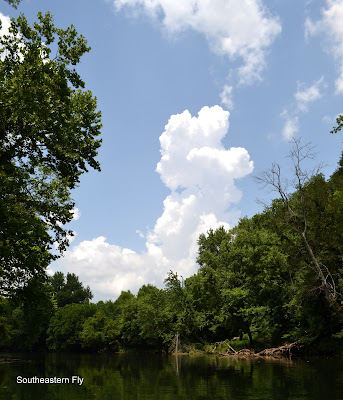 The weather for the entire day was good. Although there were times we heard thunder in the distance with a constant breeze the boat never got wet on the inside.Partly cloudy skies kept us a little cooler and sunscreen with technical clothing kept the sun at bay, which is extremely important when spending long periods of time on the water. The sun finally began to make its move toward evening and before I knew the trip was over. We loaded up and headed out. A quick glance at the clock showed we could have spent a little more time on the water. But, as Elton said the guys were satisfied with this float. These guys really did get out there and enjoy their day of fishing! 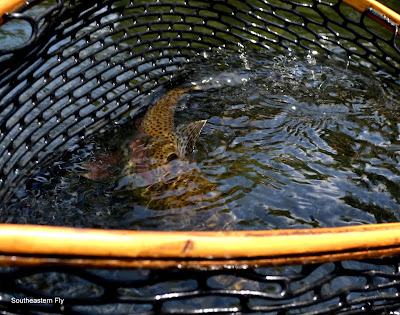