The Caney Fork is generating during the day, with two generators being the norm. There is no generation at night and short windows of opportunities for early morning fishing. Keep a keen eye on the water levels and get out of the water when you first notice an increase in flow. There are reports of fish being caught with both generators pushing. However, that is a lot of work and usually is tough to get consistent results. Streamers and sinking lines will put fish in the boat.
Brent and I caught a low water float the other day. Our catching started out slow, real darn slow. When the sun came up the fish turned on. We found some feeding fish late in the day and fished dries as well. This kept us on the river late and made a tough following day. But, all is well and we will return to fish another day.
The Obey River- Floating the Obey on two generators is possible. Pretty much the same thing goes for this river on two generators as goes with two generators on the Caney. Use streamers and sinking lines. Nymphs fished along the seam and in the back-eddies will also produce. The captain needs to keep a sharp eye on the flow and obstructions close to the bank. Getting a boat in a bad position on this much flow can cause a capsize. We are staying off the rivers with this much release.
The Elk- this little jewel is producing fish and favorable generation. Fishing is tough, but putting a nymph on the nose of a fish will produce a strike, the rest is up to the angler. Fish nymphs deep! If the nymph isn't ticking the bottom from time to time, it is not down in the water column far enough. We have been fishing multiple nymph rigs against single nymph rigs. The single nymph rig out-fishes the multiple rigs every time.  I am not sure I understand why the fish take the single rig more often, apparently the fish know.
Posted by ____________________________ at 7:51 PM 2 comments: 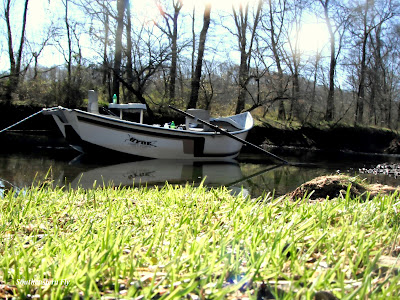 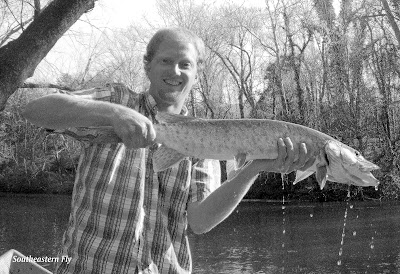 Kevin and Brady on the River

Kevin called one afternoon and wanted to nymph fish with his son Brady. We found a break in generation and  I picked them up at their motel. We launched the drifter from the gravel bar and rowed downstream to less pressured water.  The guys were rigged up with the "Super Secret Nymph" with droppers tied on below. Kevin's first cast was a thing of beauty, for a couple different reasons. The first reason was simply because Kevin looked behind him then he started his backcast. Such a simple thing can be a big thing. The second was the way he shot the line and got an extra couple rod lengths of distance from the cast. Brady, was up next and took a look behind him, then let the cast rip. Brady hasn't fished quite as much as his Dad, but within a few minutes he was in the groove and gained twice the distance in the first hour,
Kevin struck first on the dropper and then came up with two more fish. We came into a stretch in the river that I found last year. We fished the stretch and Brady came back with two fish of his own. Then when he was stripping in he got a hit, but it was a short-strike. So Brady sent the fly back into the zone and the fish struck again. This time Brady came up with the rod and the line came tight. After a nice fish Brady had a good fish and caught up on the friendly-family competition.
We continued on and we hit some sections of the river with a fish here and there. But, in some sections, it was "get a bucket and hose" cause these guys were on fire. Then things would calm down. As creeks dumped water into the river, the river would gain a little more color. The fishing slowed with every creek, but then the fish would start biting again and we would bring more fish to the net. After lunch Kevin got into a good run and pulled out a decent fish on the super secret nymph.

So the guys kept casting and fishing and picked up a few more fish. We caught a double and marked that off the list of things to do. We stopped in a section of the river with a lot of structure and fished dries to a feeding fish. The feeding was inconsistent, but we pulled out the year's first hopper anyway. Well, really the pattern is a mix of spent caddis and hopper. It was an interesting experiment even though it is a bit early in the year. So this day wound down and daylight was gone when we came to the take-out. Kevin and Brady were just a lot of fun to fish with and I am hopeful they learned the river well enough to make a trip or two back to fish from their own kayaks.

***
The river levels are mostly up and a bit down with the generation schedule. Water is still filling the lakes and Spring is on the way. We are hoping the water levels will catch the Summer pool and that is when we will "hopefully" have some windows of fishing opportunity. Trips are scheduling so if anyone is thinking of booking, it might be a good idea to get a date reserved. Until then we are tying that Super Secret Nymph and a few other trick patterns that are already producing for anglers.
Posted by ____________________________ at 8:59 PM No comments:

Wednesday in Middle Tennessee was a day of tornadoes and high winds, with heavy rains in the southern part of the state. All plans were put on hold and then delayed as waters cleared.. Friday in Middle and East Tennessee was much worse. Multiple thunderstorms throughout the day and reports of epic storms in Middle Tennessee, in the evening. East TN dealt with early storms and tornadoes and before the day was over there were reports massive hailstorms, tornadoes in the double digits and heavy rains. So Tennessee and most of the southern states saw our share of bad weather, we are all due some sunshine and calm days. Hopper season can't get here fast enough for me!
The tailwaters were not really cooperative so Greg and Brent joined me for a day on an area lake. Greg was one of the anglers who I had the opportunity to fish with on the Calvary Outfitters trip in November. Greg's mission that weekend was to learn how to cast and learn the basics of fly fishing. As was the case with all of us there were other reasons to be there. Greg learned to cast that weekend and turns out, he is a pretty darn good caster. So when we unloaded the drifter at the lake he fell back in the groove pretty quick.
It is real tough to go fishing this time of year and not take the streamer rod. Soon Greg was banging the banks with a Galloup pattern and the sinking line was helping Greg feel the rod load. Brent was in the back of the boat putting the fly within inches of the bank. It was all good. The fishing was a bit slow, so we took a break and made some big changes. We made a move to more shallow water and soon we were back to work.  Greg was first to hook up with a nice bass. Then before we knew it he was hooked up with another bass and then a panfish. He was in a groove. We spent the rest of the afternoon bringing bass and panfish and introducing them to the boat net. The sun went down behind the treeline and soon it was a bit on the cool side. We headed back to the ramp, spooked a couple geese that were too noisy anyway and loaded up the drifter. Not a bad day of warmwater fishing for March.