Fishing has been slow for the most part. The weather events have given us time to keep the boat out of the water and do the yearly maintenance. There are still some things that need to be done and all the things I have been putting off until the off-season, well guess what...it's the off-season.
Caney Fork River- The Army Corps is pushing 6000 + CFS and it doesn't look like they will be letting up anytime soon. The fish are responding to streamers fished from the boat. The numbers have been low and there have been some hits and misses along the way. Wading is not the best idea on the Caney and if there is a choice, I would stay home and stock some fly boxes. 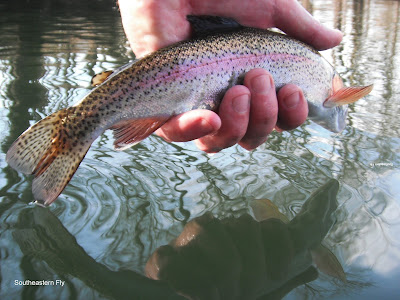 The Elk River- TVA is pumping one generator worth of water 24/7. The Tims Ford Operating Guide is showing falling water levels so we will see how it goes with the big rain event the Weather Channel Girl is calling for tonight and into tomorrow.
**
The conditions haven't been the best, in Middle Tennessee, but the weather will turn and we will be back on the rivers, hopefully soon!
Posted by ____________________________ at 5:46 PM No comments:

Caney Fork- There have been a few hours of no generation and one generator release over the past week. Now there is a lot of water in Center Hill Lake and with Great Falls scheduled to release 30,000+ CFS in the coming days, well, it is going to be a while before we see favorable releases. Today there is sleet and heavy rain again. For anyone planning to fish the Caney in the next few days...stay home and tie flies.
Elk River- TVA is only scheduled to release 100 CFS from Tims Ford Dam for the next few days. The water in the river seems to be a little lower than the 100 CFS. I say that because the flow in most places is super slow and the shoals downstream seem to be more exposed. The fishing would be even better with another 20-50 CFS releasing.
The water temps in the Elk are still 48 degrees and the fish are happy. There are some rising fish and there some small midge hatches, but nothing to write home about. It is best to tie on a nymph and hit the river. The fish won't respond to every nymph put in front of them. They will respond to a nymph bouncing along or close to the bottom. Speaking of the bottom it has been scoured by the heavy generation and personally I like that better than all the vegetation that creeps in over the course of the Summer. It is difficult to predict what will happen with the weather and water levels in the lakes and rivers. If the rain continues though we might see additional releases from Tims Ford Dam.

For a couple weeks the water levels on the tailwaters were not the best. Christmas was in the forefront in our house and it was a good one. Then I watched some football, celebrated the New Year and tried to do the things a "normal" person would do. It was tough and eventually I was in Cumberland Transit picking up tying materials and listening to fishing stories. Then it back to the tying desk to tie some chicken feathers on the shank of a hook.


I met Anthony early in the morning then we met Josh, who drove over from Maryville. Both were on a quest to catch their first musky on the fly. For me, it felt good to be back on the water! We loaded the boat and talked with Greg who was floating solo for the day. Greg it was nice to finally meet in person. Then we pushed the drifter from the ramp and got that feeling that only comes  when the boat first starts to float.
**
High Water Everywhere- This float was on higher water than any we floated last year. The plan was simple, bomb the banks and try to coax a hot fish out of soft water.  Coax the fish off the bank like a cat going after a string. Big flies on sinking line with erratic retrieves.Did it happen like that? Well sort of... 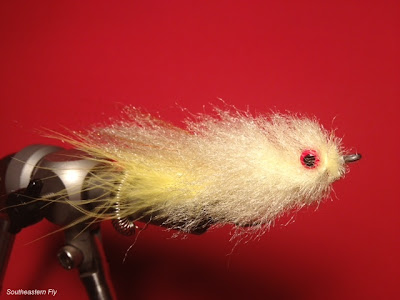 Optimism- There was optimism in the boat as we shoved off and the guys started casting big flies to toothy critters. We tried several different patterns, different strips while fishing to structure and soft water. It didn't take too long for our first fish to show up. I heard recently that musky will generally be in the same spots at the same times of the year. Last year we boated some fish and had follows from several fish all along the float. We floated into a section where last year David had a hot fish follow but not eat. This time Anthony was in the front of the boat and the fish came off the short rock wall. It was a lazy follow and the fish wasn't as hot as we like. The fish came out but didn't want to play. We hung around and kept trying, but it was over as fast as it started. We had a follow after that and then it got a little quiet. Things were about to heat up.

Josh was tuned in to his casting and even though the water levels were keeping us from sight casting, everyone kept a positive attitude. Then Josh dropped a cast within inches of the bank and a fish was on the fly before Josh finished his first strip. The fish ate and received a strip-set for its troubles. The hook up was a good one. Josh's questions of how a musky fights were being answered. The fish put up a good fight taking and giving as he moved around the boat. The fish even jumped at the boat, answering another question. Josh did a great job playing the fish to the net and then he was holding his first southern musky on the fly.