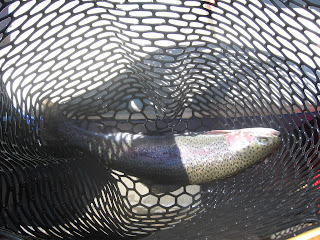 My morning commute was different on Monday. Instead of getting into the truck and heading to the office, I hooked up the drifter and headed to the river to meet Ray B. Jr. and Raymond B. Sr. for a float on the . Ray Jr. came down from to meet his Dad, Raymond from I picked them up from their motel and we met Dan for the usual shuttle arrangement.

We were on the river several hours after the Army Corps had shut down the flow. The water was gin clear and as low as I have seen it this year. The fish could see every movement and were extremely skittish. Fortunately, both Ray and Raymond are very good with their rods and could cast the distance needed for a shot at these nervous fish. It was apparent early-on that we need some relief from the low water.

By switching to multiple fly combinations we had the boat slam early in the trip, although we hadn’t picked up the size that we were seeking. The stockers had come out to play, but the friendly holdovers were running the other way and moving into the shadows at every opportunity.

We stopped for Pineapple Chops and baked potatoes, cooked over an open flame. While we rested and filled our tanks, the Army Corp released a generous helping of 4100 CFS and filled the river. After lunch we packed up and launched the drifter for part two of our day. 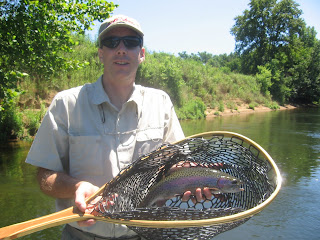 We only floated 50 yards before the first quality holdover struck Ray’s BHPT. He commented on how much time had passed since he caught a fish on 6x tippet. I took the opportunity to explain that he should be extra careful, because I had him on 7X. After a few minutes of reel scream, Ray brought the rainbow to the net and we boated the first quality holdover of the day. During our pass through , Ray Jr. hooked up with a few nice fish. 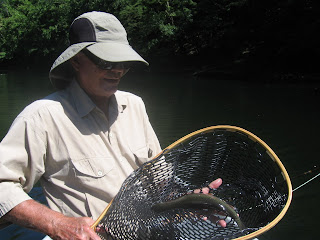 Raymond lost a nice brown a short time later and then he got into a few nice fish of his own. It is remarkable how the colors on the rainbows have brightened up over the past few weeks. Their gill plates are deep red prism and their lateral line has distinctive color markings that are visible while they lay on the bottom.

Both anglers got their Slam. Ray Jr. caught the longest brookie and Raymond Sr. took the honors of the largest rainbow and the largest brown. Toward the end of the float Ray Jr. took out a sweet little hand built 3 wt Sage. Ray built this one himself a few years back while they were fishing out West. We dropped a nymph under the indicator and he gave the 3 wt. a run through its casting paces. His reward came a short time later from another colorful rainbow. 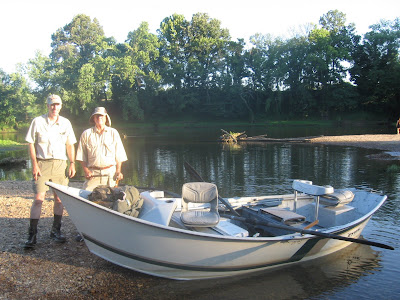 Although Ray and Raymond are accomplished dry fly anglers, they didn’t have any trouble catching fish on the nymphs. With the new orifice gate going in, hopefully the new flow will help the hatches on the Caney. As the gravel bars get a little more water for the bugs and the brookies gain some additional size, would it be a stretch to expect some quality dry fly fishing on the ?
Posted by ____________________________ at 7:04 PM