The last time we were on the Obey was back in September. TVA was releasing one generator and it pushed us past the good water pretty quick. We made the statement that "fishing could be good after they turn off the generators and the flow slows down a little".

Today I fished with Gary W. from Nolensville, TN on the Obey River. This was Gary's first trip to the Obey. After we launched the boat it was only a few minutes before Gary hooked his very first brook trout. Gary has fished the Smoky's, from Michigan to Maine, and out West, but never had caught a brookie. I was glad he was able to have "a first" on such a fine day. 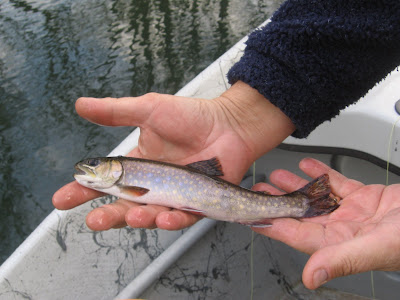 We picked up several brook trout throughout the upper part of the float, as well as a rainbow here and there. The weather conditions today were good....unless a person took a look at the wind charts. The temperature was in the 60's for the most part, with sunny to partly cloudy skies. The wind was blowing on most parts of the river, but we were able to find some places with calm water where we could get a good drift. Those good drifts were often rewarded with a hungry fish. 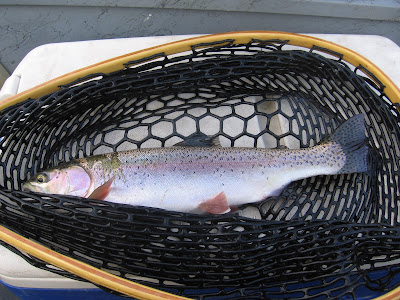 Nice Rainbow in the Boat Net


At one point the main part of the river was impossible to navigate and get a clean drift due to the wind. So we took option II, which was to seek refuge behind an island with some shelter from the wind. Gary was throwing the Sage and playing with a three fly rig that had two BHPT's and a Miracle Midge. He hooked a strong rainbow that came up from some deep water. The fish sent me scrambling for the oars to keep it from running too far under the boat and the net for the appropriate scoop of the fish. Gary played the fish and brought it onto the reel. After a few short runs toward a downed log Gary turned the fish and brought the fish into the boat. Gary had another rainbow to show for the day. 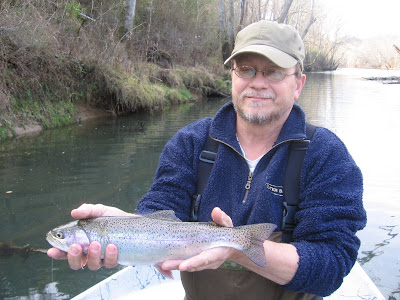 A Healthy Rainbow
The day was good in-spite of the wind. The wind was a difficult at times and gave quite a workout at the oars. But, considering the amount of food I ate over the past week I probably need to row another 7 miles! And, what better way to end a trip than BBQ! There is a place I have been wanting to try for several years. It is close too the river and it seems like every morning we drive by to launch the boat, they are cranking up the hickory to start their cooking. Well tonight when we got off the river we went to the One Stop so I could try the BBQ. There aren't many Mom-Pop places around like there used to be. But, if you are up on the Obey, fishing for trout, I would recommend a stop by for some of their BBQ to top off a good day on the river. 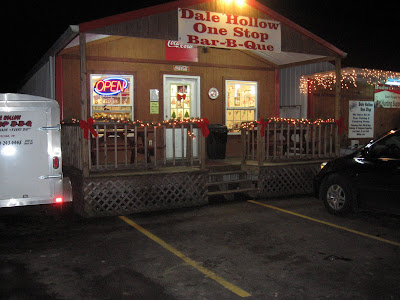