I am writing this at on Saturday night with three hours sleep in the past forty-eight hours. We just came in off the river and it was an outstanding day. I fished with Anthony Williams and Dan Sharley who are both friends of mine from . We fish together quite a bit, but today was a little different for us. We usually fly fish the by floating a nymph at least for a little while, but today we threw streamers for 11 hours straight. Streamer fishing is my favorite way to fish so this time of the year is something I can get excited about.

We started the day leaving the dam at or so with the digital thermometer in the truck showing ICE. We started throwing streamers and immediately started raising fish. Early on we moved several fish but hook-ups and landings were a little slower than expected. After we got into the groove we started landing some fish. A friend of ours, Mark Roberts was behind us most of the day with a friend of his Aaron and they left the dam shortly after we shoved off. 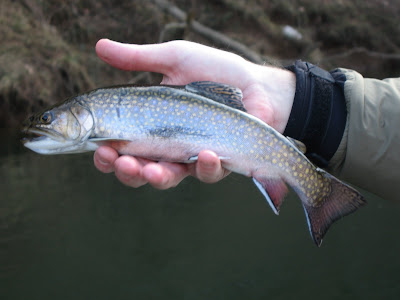 Anthony hit the combination early in the day with a pattern he tied up and Dan wasn’t far behind trying some new patterns his father has been working on. I watched these two fish while I was at the oars. They were consistently placing the flies within inches of their targets and hit most of the places that might hold a trout or two. The rewards were worth their trouble. Like I said Anthony stepped it up a notch today and landed some very nice browns, completing his slam without a problem. Dan picked up nice fish of all three varieties as well. I struggled early on, but completed my slam after lunch too. 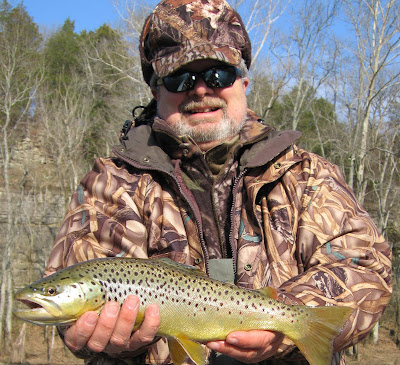 Anthony and His Lucky Hat - Catch the After Lunch Brown Trout

Speaking of lunch…..as we cruised into the usual lunch spot we had the first double of the day. Anthony brought his brown to the net, but the double almost went unnoticed due to the fact that Dan had such a nice rainbow on his line. We brought the fish to the net and stopped to eat our grilled burgers with the usual accoutrements. The discussion for the day was about the cold weather and boat traffic. Mark and Aaron came ashore shortly after and we continued sharing our points of view on fires, fish and cold fronts. Then before we knew it we were in the drifter with Anthony hooked up on another brown. 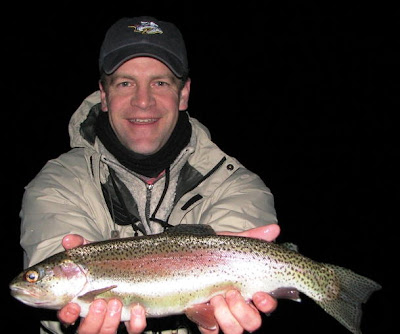 Dan's Rainbow...A Strip, A Fight, A Catch, A Photo and A Release

The weather was very cold and didn’t get above 43 degrees with a “feels like” of cold and windy. After the sun started going down behind the bluffs and trees the cold became downright nasty. Reviving fish was necessary, but brutal on the hands at the same time. I wouldn’t have had it any other way because the day was such a good one. I will post this in the morning but for now I am off to catch up on some of that sleep I missed over the past couple days. 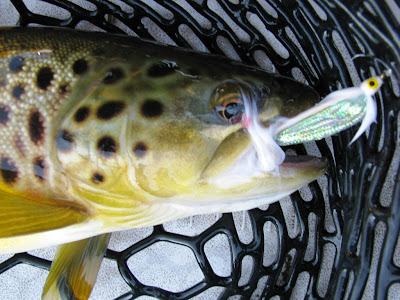