We got out this weekend and with the higher water on the Caney Fork, although we may fish it on two in the near future, we ended up at the Elk. Saturday night brought severe storms here in Middle Tennessee, but Dan and I made our minds up to hit the river regardless of the conditions. After the trip last week I wanted to see what the recent generation and higher sluice/spill was doing for the river. 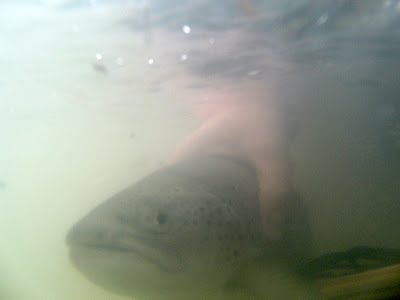 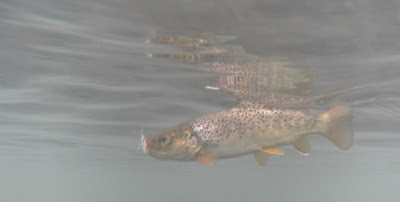 Mid-Summer 2008 Water Clarity (with no rain) Downstream/Past the First Creek
We arrived at the Elk to find an improved river! Thank you TVA and TWRA for the help with the water quality! There was no green slime and you could see the bottom for the most part at least up in the Upper Section (above the two mile mark) of the river. We figured it would be pretty muddy downstream with all the small creeks that run into the river at various points, which had nothing to due with my comparison of the water for this trip. That was correct, but the mud should move on downstream with some settling on the bottom until the next round of generation.

We started off the float by bringing to net some of the recent stockers. Both rainbows and browns came out to greet our nymph and streamer offerings. The rumor mill is churning with talk of a large number of stocker browns due to be released this year. If the fish can run the gaunlet, get themselves downstream and spread out it would be good news for the coming years. 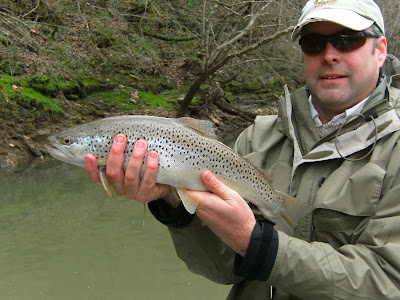 We Found Some Surprises In The Elk River
We threw various colors throughout the day from white to black. The best colors for this trip were green/white and purple/black. Streamer action was at a premium and making the marabou move was critical. The action of the fly seemed particularly important, with a super slow retrieve early in the day and a bank pounding Run and Gun approach working later into the evening. 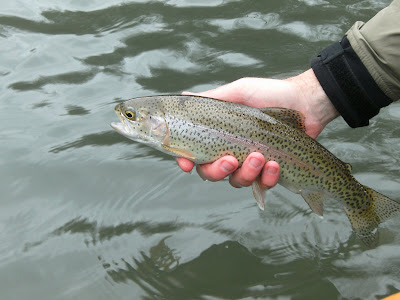 Right now I would say the Elk should produce pretty well in the upper section as the fish move around the bend and down through the rock chute. The middle section still has not produced as well as last year, however it is still a little early in the season. The lower section continues to produce here and there, but the weeds have not gone away.