I hit the with Nabours and Friends logo designer and Calvary Outfitters charter member, Blake M. Blake has been fishing for a couple of years now and I hoped we could help him the big fish.

We launched the boat early for shuttle purposes and were soon underway. I was concerned by the time we floated to through the Bend Pool. Not just from the absence of fish, as you know there is no better boat to spot the fish than from a drifter, but, because of the water quality. Last year around this time the river was in very good shape, however the water quality tells a much different tale this year. 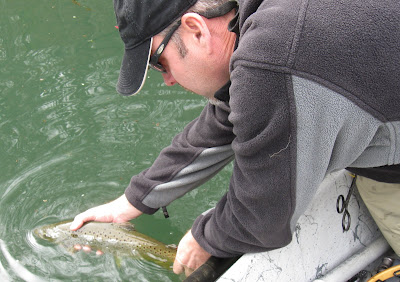 Now, I am not going to poor-mouth the water quality on this report, too much. If you want to know the quality of the river, just take a ride down there and look or at the least drop me an email and I will let you know what we found. I am concerned enough with the quality of the water that I have already sent some emails this morning. Also, I will be attending the Calvary Outfitters meeting on Thursday, March 26th, where TWRA will be speaking about the Elk.

Back to the fishing, it was not the stellar day that I expected, but not a bad day to be out either. We threw Big Uglies most of the day turning several nice fish; we had some hits, hook-ups, saw some and caught some fish. We ran through the color chart on the flies a couple times and surprisingly purple was a good color to catch their attention. Yellow worked very well and picked up a brown and a rainbow on back to back retrieves. Blake lost one extremely nice brown and turned the largest fish I have ever seen on the river, but the fish chased the fly instead of getting around in front of it to eat. We were still talking about that one when we got arrived back in .

We finished the day talking with Guy and Rich, who had floated from Farris Creek down to Old Dam Ford and stopped by the ramp as we were loading the boat. They reported much the same water conditions.

Blake was able to cast a lot yesterday as we moved slowly along the river and began to haul off the front cast some by the end of the day. Blake was a trooper and threw that 8 wt. for most of the day. Sometime after lunch I noticed his fly was landing at the bank or within a few inches, which is when he started getting the most looks from the larger fish. He also learned to swim the flies and how different patterns should be fished with different retrieves. It was good to have Blake on the boat and I am looking forward to fishing with him again.

Blake Working Some Deer Hair & Marabou Through A Deep Run.

TVA has begun to release one generator this evening starting at 6:00 p.m. and they have said they will increase the flow to 200 CFS. This should help the river overall and move some of the nastiness out of the upper sections of the river. Thanks TVA and TWRA for your response.