The Elk River On Falling Water

Weather conditions for the day would be almost perfect. The morning would be sunny with cloud cover moving in just about lunch time. As usual there is a chance of rain on the in the afternoon. The generation was not favorable in the morning as TVA released one generator from about

Bob F. and his 11 year old son David, from Red Level AL, had come to for their annual spring trip. The two had spent four days fishing the near Elizabethton TN and brought reports back of good fishing from that area.

Because Bob and David were staying in and would arrive from Upper East TN with a little time to spare, they took in the Jack Daniels Tour to wind down their travel day. The tour now starts at the top of the hill and winds back through the distillery where you can see the ins and outs of making fine Tennessee Whiskey as well as the marketing of a product (Jack Daniels) that has been around for over 140 years.

I stopped by the motel and picked up Bob and David amidst several Harley riders who were up for the day from . I learned a little about Harley Davidson while Bob and David gathered some of their gear. We stopped for coffee and donuts on the way and were soon wading at Farris Creek. 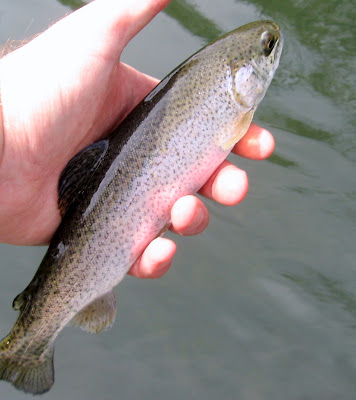 Wading at Farris Creek was a good warm up and an opportunity to try a few things, while Bob and David got back into the casting rhythm. It was apparent early that David is not an average 11 year old fly fisherman. He is talented with his casting and when given a tip or a suggestion he was immediate to respond. His vocabulary included yes sir and no sir, with thank you in the mix as well. We picked up a couple at Farris then before we knew it we were off to the dam to launch the drifter.

The Middle Tennessee Fly Fishers were conducting their Beginning Fly Fishing Class at and the . This was an excellent weekend for their outing with nice weather and a window of wading opportunity as well.

We launched the drifter on falling water, tossed some streamers, and the fish responded with some follows, until we floated into the Bend Pool. The Elk River Bend Pool is where the fish were hanging out. 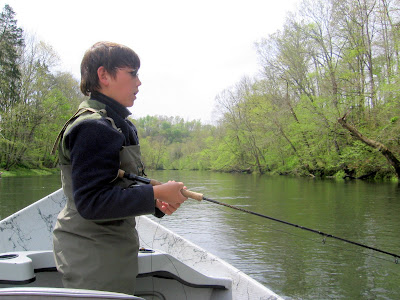 David F. on the Streamers Early

We put my usual BHPT pattern under an indicator and David went to work. The first fish was a rainbow, which made me question, to myself, the reports of the recent brown stocking. The next fish was a small brown, the sight of several other browns following the hooked fish quickly answered my question and then it the day was on. David continued working a good seem by a gravel bar, getting hits and landing fish. 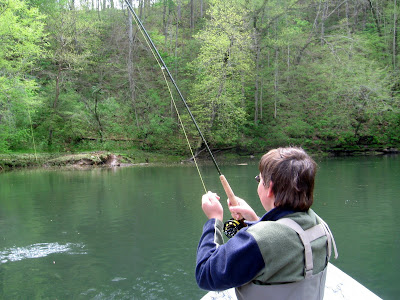 It appeared to us was, if David said “I caught a fish” before that fish was in the net, the fish would get off. But, he overcame that quickly and soon was focused on the indicator, which seemed to be under water more than on top of the water. David’s cast is certainly above average for an 11 year old, but he possesses an angling skill that is above average as well. The two complement each other and work well together, which makes for a really nice day in the boat. David continued to boat fish throughout our stop at the Bend Pool. 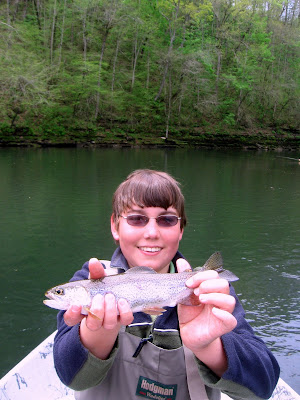 Midway through the catching session it was Bob’s turn. We loaded his rod with BHPT and midge combo and he promptly hooked and lost a few of his own. But, Bob dialed in quickly and it was a short free-for-all with both anglers hooking up. Bob is no stranger to the long rod and has a nice cast with just the right amount of stop in the back cast to load the rod. He has a smooth follow-through that lands the fly extremely soft. This would come into play several times over the course of this float. 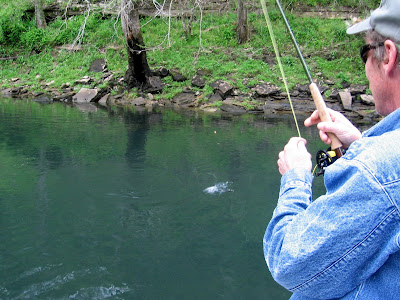 The Bend Pool was starting to stack up with anglers and we were kind of holding up progression for others, so we pulled up the anchor and drifted downstream on more falling water. We changed droppers from time to time and they switched rods back and forth trying to decide which rod had the best feel. Both were hooking up with some progressively larger holdovers. 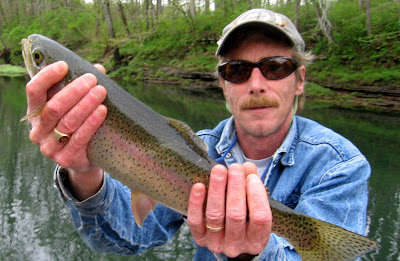 Caught on the Midge 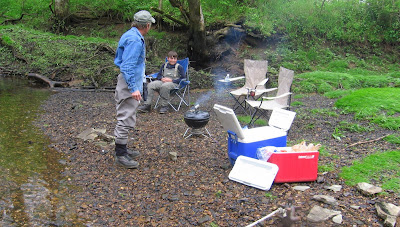 But, we couldn’t hang out on the shore too long and soon we were back in the boat. We floated about 30 yards and Bob was hooked up again. David soon followed and then lost a nice fish that rivaled Bob’s best fish of the day. Over the past two years we have hooked a big fish out of this hole and lost it a few different times. The first time was a long fight which resulted in a pulled hook at the boat. The second time was a short fight on a streamer where the fish threw the hook after a quick run. This time David set the hook and the fish made blistering run upstream and threw the hook on the turn to charge back at the boat. 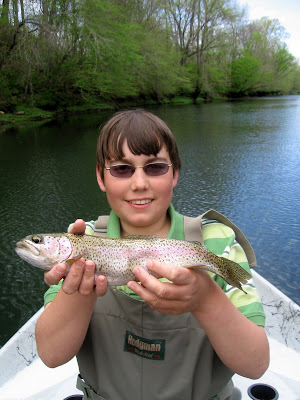 David is Hooked Up and Catching.......Again

We floated longer into the day continuing to bring fish to the net on nymphs, with daylight pushing us to get to the ramp we pulled out the streamers again and moved Bob to the front of the boat. We fished streamers at some of the likely spots, but the big ones didn’t want to show their hand. We only had time to hit a few of the good places before the sun dipped behind the hills and then daylight was gone as we slid into the ramp. 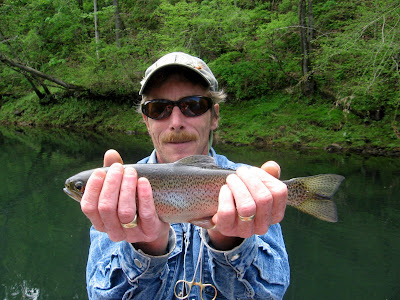 Caught With a Soft-touch Landing

Falling water on the Elk is not always an option. The generation can be spotty as spring turns into summer. Bob and David hit the Elk at a very good time and added their casting and angling skills to produce what was a very good day.

The next several weeks should be a good time to book a trip on the Elk, as the BHPT /dropper hatch is now producing rainbows and browns under the indicator.