Back in August I was checking out the local message boards and I saw this post from Ron Snow. “I have an idea for a fund raiser. I'm looking to find out about some fly fishing related charities to be the beneficiary.” A lot of people offered good ideas. Ron made the decision to put the energy toward a weekend at the river and benefit Project Healing Waters.

Fast forward to January… Ron met with several of us to kick off the Nabours and Friends for Project Healing Waters planning meeting. We had good discussion that night; somehow Ron got the plan down on paper and off we went….well off Ron went to make this thing happen. One of the things Ron accomplished was to line up entertainment and food for Friday night, which started the festivities and the two day event.

There would be fly tying, a lesson or two from Jack Hise on how to make furled leaders, and other activities. My assignment for Saturday was to take a Veteran fishing. It all seemed pretty simple a couple months back, I mean I take people fishing, I like rowing and helping others catch fish, and it is relaxing for everyone, right? But, as we drew closer to the event we began to realize the Army Corps didn’t get the press release for the event and they continued to blow 7600 CFS through a couple generators. Add a bunch of water from the pre and post tornado rains and you get…well, high water, which was up into the trees along the banks.

I had committed to Ron early on and said I would like to take one of the vets on the river. Ron was gracious, because he knew the water situation, and gave me the opportunity to back out. It had been two days since I was on the water and wanted to get back behind the oars. Heck we might even fool a fish before the day was over. The boat was pushed out of the garage on Saturday morning and off to the river I went. So far it was pretty much like any other trip.

Saturday morning brought fog and a slight drizzle. When I arrived at the pavilion the breakfast was just hitting the plates. I hung around, saw some faces I haven’t seen in a while and made some new friends.

Then I met Billy Davis. Billy would be my client for the day and we made the usual chit chat. As several of us stood around and listened to Billy we realized this “fund raiser” was more than just raising some cash for a good cause. Billy quickly put things into perspective when he talked about his coming back from and the struggles he had after his return. For instance sleeping in the dark is just not an option. While in Vietnam Billy had guard duty at night and he said “it was so dark out there you couldn’t see your hand two inches from your face.” He added when he got back from the war, he made the decision that he would never be in the dark again. 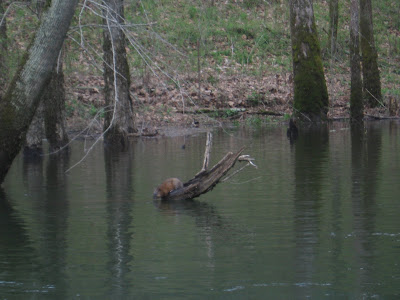 Some Wildlife Along The River


Billy talked and we listened to his story. He said “my life didn’t seem like it mattered much until he was offered an opportunity to fly fish one day while I was in the hospital”. The next thing he knew he was asked to represent Project Healing Waters at an event, after that event another and another. Then we were standing there at 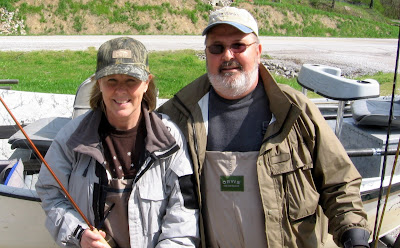 With so many people around and one empty seat in the back of the boat we really needed someone else to fill the boat. I like to take new folks fishing when I get the chance and Ron had just the person. Someone who has that desire to learn and fish, who has a good attitude and just wants to get the most out of a trip. Janie T. fit that description. Ron worked a little with her cast, which was good to start with. 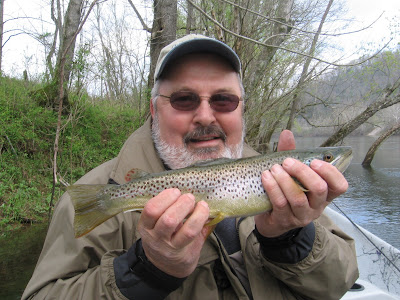 So, another opportunity to get on the river was underway. This time I was between two folks who did know each other, or even have an idea they would get on the water. 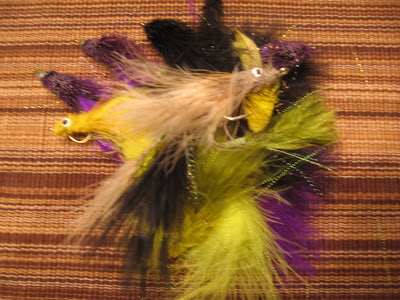 We launched the boat and began the float. Then stopped for some additional casting and retrieving instruction at the stairs, soon we were floating down the river hitting the gravel bars with the Muppets. With the high water we put the streamer rods to work and focused on lighter color flies. As the two anglers became more comfortable with the streamer rods we settled in closer to the bank. At one point we pulled close to the bank in some slack water and let the anchor down. The anchor rope slipped through the rollers, but never touched the bottom. The Caney was high. 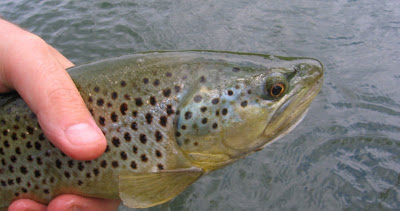 We saw fish, caught fish, enjoyed the geese, herons and saw the eagle from a distance.Before we knew it the ramp at Happy Hollow was just a few strokes away. We arrived just ahead of a couple other boats. With the boat on the trailer and the rods were stowed in the truck, we headed back to the pavilion for some excellent BBQ, which was prepared by Chef Mike Hill.

There was an auction, raffle and fellowship with other anglers. Rods were cast and some semi-true stories were told. The way I measured it, this event was a success. If you missed this year there is always next year, which I am sure will be even better.

Thanks to Ron and all the folks who helped organize the event. Dan and Bret thanks for taking care of the shuttle and my truck. Billy and Janie I had a fun day on the water and I hope you did as well.

I hope to see you next year. 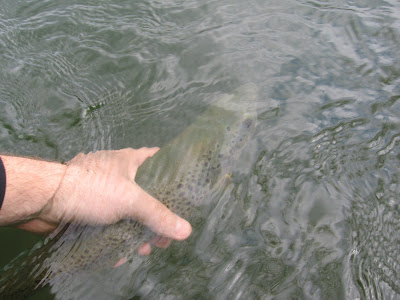