Fly Fishing On The Caney Fork With Two Generators...Plus 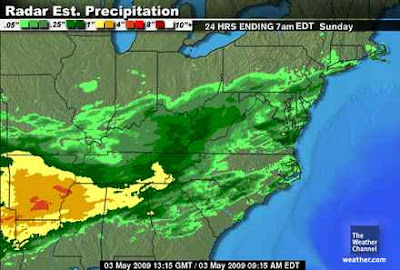 The Weather Channel Girl talks about the two low pressure areas that are going to collide over Middle TN. The future predictions show the worst weather East of Nashville and over . Jim A. is coming down from as the clouds build and the rains come down. We talked several times by phone throughout the week about the weather predictions and although it is a long drive, sometimes a person just has to get away.

Friday afternoon on the drive from M’boro to the river the water is standing in the low lying area. Calls are coming from friends who are headed back home from the river, because of the bad weather and friends who are, like us, going to the river….rain and storms or not, we’re fishing… sometimes a person just has to get away. 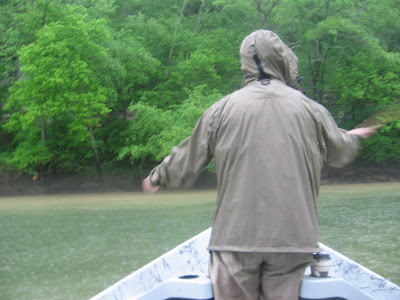 Jim Fishes the Seams of Mud and Stained Water

Late Friday afternoon although, the water is high, the river looks good at the dam, but at the ramp the mud is entering into the water. The creek at the stairs shows mud entering on the right downstream side. The creek at the water meter lets mud into the left downstream side of the river. Fishing the seams of mud Jim produces flashes from fish in between the flashes of lightning. By the time we get to Where Cows Walk on Water the river looks more like Where Cows Walk on Mud. T Caney Fork looks like chocolate milk and the milk colored water covers the entire river… It was a quick float. 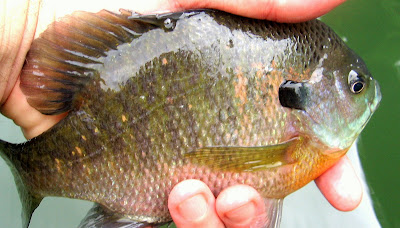 This Fish Has More Color Than The Weather Map

Early Saturday morning I contemplate heading for the Clinch. The is where I started fishing tailwaters and have wanted to get back over and fish it for the past few years, but just haven’t found the time. We decide to do a little scouting along the before we set our sights on a plan for the day. As we top the hill on the way to Happy Hollow the river is clear again, or should I say as clear as it can get after three inches of rain in less than 24 hours. 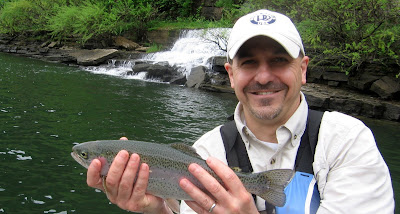 Jim With A Nice Rainbow

We launch and see friends from M’boro, who made it through the night, fishing with hardware and having some luck. With all the boats in the dam-area it was like a washing machine. Everyone was making the circle down the wall, around the bottom of the dam and into the swift water, then downstream. It was a mini conga-line. We fell in line and I watched each boat as they passed the waterfalls at the dam. We only saw one boat pick up a fish or two. When it was our turn we moved into position and Jim put a nice drift on nymph. His reward was a trout just over 12”. Then another trout, and then a bluegill and another bluegill. Then Jim hooked into a pretty good rainbow and brought it to the net. All was going to plan….

….until, the Army Corps added a siren and an additional generator for even higher water. We called the nice lady at TVA Lake Information Line and found out someone forgot to tell her the Army Corps turned loose another generator. But, someone did tell the stripe that it was a good time to hit streamers and the stripe bite was on for a short time. 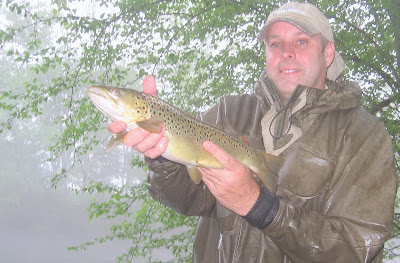 When you add overflowing creeks to the 7300 CFS it equals highest water I’ve seen on two generators, on the , in a while. But the sun was shining in between rain showers and as we moved downstream we had several follows. One brown that took our bucktail and marabou offering completely out of the water, only to let go before the fish hit the water on its return dive. It was a 9.2 on the judge’s scorecards and would have been a perfect 10 if the fish hadn’t spit the hook.

We picked up more fish on our trip downriver including a skipjack. The only species missing was the brook trout. But, we gave new meaning to the Caney Slam with stripe; browns, rainbows, blue gill, and skipjack, all boated before the day was over. 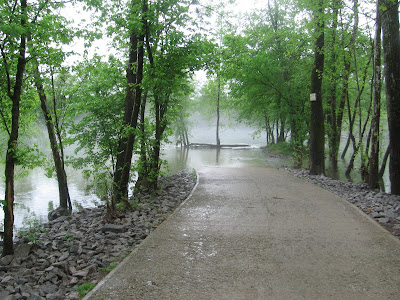 We elected to stay off the river Sunday, which was the right thing to do. We decided to just check out some accesses to the lake and the river instead.

Now sitting in front of the computer and checking out the TVA Reservoir Information link, Center Hill is rising about a foot every three hours. It looks like an additional generator or possibly a spill might be coming to before the week is over.

The quote of the weekend: “You have to expect some bad weather if you are involved in an outdoor sport” Jim A. ()…