I spent the day on the with fellow guide Mark Roberts who booked a trip for four anglers from . Jeff, Bill, Russ and Chip came in on Thursday night and were ready to launch bright and early on Friday morning. We rowed down the river on falling water and soon Russ and Jeff, who were in my boat in the morning, were hooked up on PT’s and midges.

We made our way through the conga line in the upper portion of the river and saw some friends and familiar faces. The water was falling, but did not clear like it normally does after a couple hours of generation. As a matter of fact it like similar to the Elk a couple months back, before TVA took the time to flush out the Elk. But the generation had moved some water, so no one has really put their finger on the stained water situation. 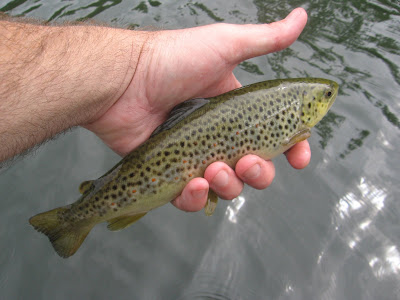 The stockers were helping to put a bend in the rod, but none of the larger fish were showing up. Until Jeff hooked into a rainbow on a PT. We moved the fish toward the net and the fish popped off at the boat. But, Jeff was cool about it and we continued on spotting fish and waiting on the second round of generation and ….lunch. 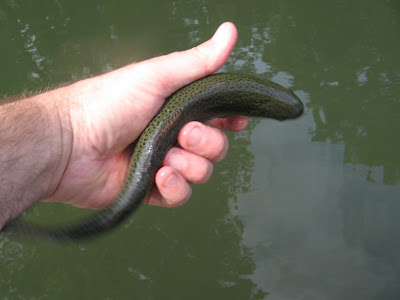 At lunch Jeff brought the trips only brookie to hand, which completed the boat slam for us and brought the morning trip to an end. He brought the brookie in just as the water began its rise from the second round of generation. But, the Army Corps did not stick with the forecast and only released 2000 CFS for one hour. The water was also warm and some passers-by where saying it was already 61 degrees. It will be interesting to see how the river recovers from the spill last month. We had a good meal of chops, potato salad (we are in the South), grilled corn on the cob and fruit salad. We topped all that off with a piece of pie and soon we were back in the boats. 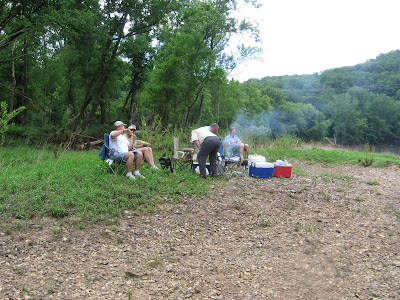 Lunchtime on the Caney Fork

This time we switched up the anglers (as we do most times) and it was Bill and Chip’s turn in the drifter. Bill and Chip quickly hooked up with a couple of rainbows and we boated a shad, but the most interesting fish of the day was a walleye/sauger that we caught just a few minutes after lunch. Bill quickly boated the fish and we were soon off to the next big thing, which were more rainbows and a brown or two for both Chip and Bill.

The weather was clear with a high pressure system over the area, with a full moon to boot. It was very good day to be out on the water with a fine group of anglers. 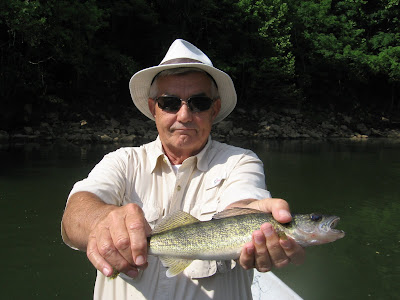