Back in the fall I was on the with a Barry H. We were just out for a day on the river, floating, catching up on some things that need to be caught up on, and generally just wasting some time in a good way. It was my turn to fish as Barry had already boated a few fish, when we came up to a nice shoal and a couple anglers. As we moved to the other side of the river, to give as much room as we could, we were flagged down by a nice lady who was interested in the boat and who inquired about a fly fishing guide. Jane, who I had come to know in just a few short minutes, said she would give me a call to book a trip later. We pulled up the anchor and slid down stream, Jane also added a tip about a nice pile of rocks that would beg my streamers attention.

One of the Rainbows Jane Brought to the Boat


Fast forward to January when Jane and I scheduled a day for a trip on the river to throw streamers. But, Mother Nature had other plans and the float was called off. After a few other attempts at getting on the river together, between busy schedules and high water, we finally arranged a half day trip to hit the .

Sometimes when a trip is booked you wonder if the angler knows the cork is end the end you hold. Jane's enthusiasm let me know that first day in the fall that she knew which end of the fly rod was made for casting, which end was made for catching and possibly more than she was letting me know. However, I didn't know Jane was such an accomplished angler... 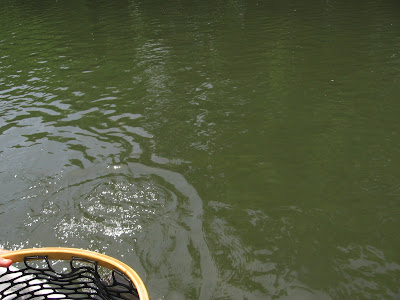 The Water On The Caney Is Still Off-Color

Jane was glad to be on the water and appreciative to get a chance to cast the rod. I put her on the streamer rod right-away... (you know how I am, and well, it was high water and all). Jane wasted no time in landing the streamer inches from the bank and I realized my suspicions might be correct, in that she knew much, much more than she let on in the previous discussions.

As we floated down river and got to know each other, she began to let me know that she knew how to cast, where to place the fly, and how to select good water. We came into a large pool that backed up to a shoal. Jane flipped the nymph and it floated several years before the indicator began its descent. As she fought that healthy rainbow and played it to the boat, a large hybrid/stripe came to the surface and took a swipe at the bow, then just as fast it was gone. We netted the rainbow and released it after the appropriate hero shots. The big predator fish was the talk of the boat the rest of the day.

We don't fish many dry flies on the Caney, mostly because we see more midges than any other insect. The midges do not tend to stay on the water long after making their way to the surface. Therefore, the trout don't key-in on the top water as much as some other streams and tailwaters. Jane is getting ready for her summer trip out West where dry flies are the norm and she wanted to float a dry across a shoal. So that's exactly what we did. The dry fly is where Jane shines. Her casting and placement of the fly in the right places was uncanny. We fished the shoal and the tail of the pool, down a bluff and into some cover. We didn't pick up the fish we were looking for, but we did agree that we would continue the quest for dry fly action in the future.

We continued the push down river and picked up several more fish along the half day float. We also got to know each others strengths and weaknesses that always seem to come with a new pairing of guide and angler. We ended the day at the ramp watching a couple of guys rescue a stranded truck from rising water. (See Jane's story here) Overall it was a good day on the river. We fished the cycle of generation, falling water and then a round of rising generation to complete the day.

Jane I am looking forward to fishing together later this year and have a great trip to Jackson Hole. 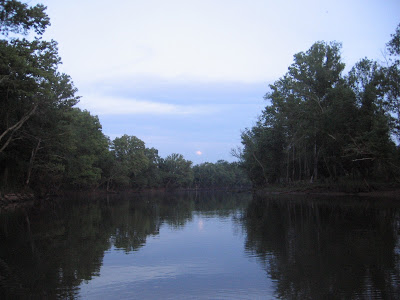 Moon Coming Up Over Betty's Island