Anyone who has been reading the internet, and even some of these fishing reports, will see the Caney Fork has not been fishing as good this year as it was fishing last year. With the sluice finally trimmed to the “more normal” 250 CFS it was time to find out what the fish were thinking. David and I have fished together and we have been at some of the same fly fishing meetings. We have also spent some time at Little River Outfitters discussing the finer points of the Caney. So, after a few emails back and forth we set the time and place and hit the river.

Although nothing was said between us, it must have been understood that this was to be more of an experimental float. We both said we wanted to try some different things and see if we can crack the latest code on the Caney, as we launched the drifter. 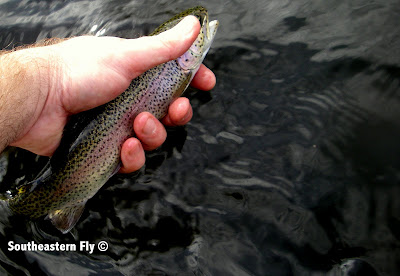 We headed to the base of the dam and I mean to the base of the dam, between the walls where the generators release. With streamers flying we had one middle-of-the-road strike, but no fish. We backed out of there and decided we wanted to fish the sluice. So we went to the sluice wall (I would not recommend this) and fished directly into the sluice discharge. We both made several passes, but the fish were not interested. The water was brown and foamy coming from the sluice. After a short time of fishing the sluice, the side of the boat had significant scum lines. That concluded the “Adventure Portion” of the trip. The fish began to rise in the dam pool so we pulled out and started down the river. 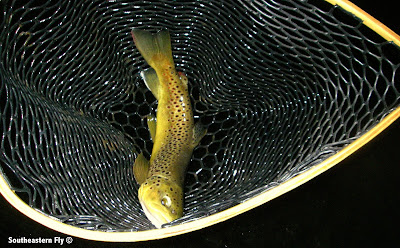 An After Hours Brown

Both David and I tried several different patterns and had a few hatchery brats in the boat by the time we made it to the steps. We were not the only people catching fish, which was a good sign. The anglers wading at the steps were catching fish too. One or two folks were catching fish on a pretty regular basis. We hooked up with a few fish here and there on nymphs and small midge attractor patterns.

The wind came and went several times throughout the upper portion of the float. When the wind would die down, the fish would start rising and I would put on a dry/dropper. The wind would pick up, the fish would stop rising and I would switch back to nymphs. It was pretty brutal and David was having a good time at my expense. My new plan was to forgo the wind, be lazy and just fish nymphs to rising fish when I could. This worked out pretty well for me throughout the rest of the day. 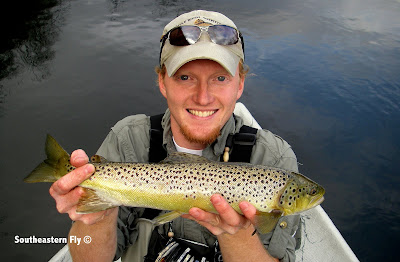 David With A Nice Brown

We hit the usual places and although it was not a record setting day, this day was better than expected. David caught the larger fish from the front of the drifter, on several different patterns, using different techniques and drifts. The only fish we wish would give us another shot was at one of my favorite stretches. (No I am not going to tell you where it is). But, the stretch is very unassuming and as most anglers look away at the more inviting water, this stretch is quickly dismissed without a second glance. Anyway, David placed his fly in just the right spot, got a good drift. The fish came to the top and took the indicator, on the way down it must have grabbed the fly as it raced to structure. It was a head shaking, reel screaming event that lasted two seconds….tops. The fish broke free and then only thing left was the rig, which was now in mid-air and flying toward our heads.

We continued on picking up a fish here and a fish there. Later the sun, which was behind the clouds most of the day, went down behind the ridge. David went back to the front of the boat, streamer rod in hand. We began to pound the banks on a slow steady drift. He had a couple hits and a fish-on then lost pretty quick and we were both feeling good overall. Then the rod bent and it was game on. David boated the last nice brown of the evening. After getting the fish in the net and snapping the appropriate hero shots we bounced along the river hitting only the high points.

The coyotes came out in the hills around the Caney. They were barking on both sides of the river just after the sun went down and continued on, from time to time, throughout the remainder of the float. The owls were out, as were a flock of ducks and one angry heron that we decided was being eaten by a fox, or Sasquatch. We cruised into the take-out an hour after generation started and loaded the boat before the generation hit. 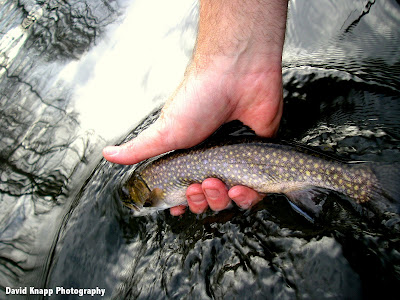 Brookies in the Fall

Thinking back about the day, it was really pretty good. There were a few nice fish, we caught fish on most of the methods we tried and we caught the slam. Not a great day in regards to high numbers of fish, but a day of quality fish and healthy fish, rising again in most parts of the river. There were some missed opportunities, some all out misses and some good laughs. David is an exceptional angler who loves to be on the water. He listens and offers tips as well. We will do this again, especially with streamer season just around the corner. 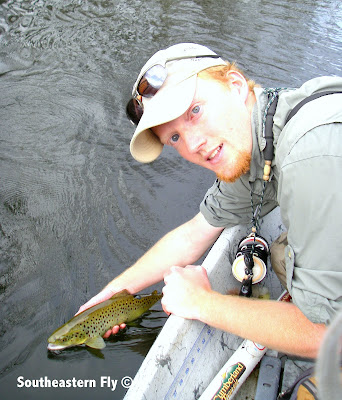