COLD!! That's the report, thanks for stopping by...

No really there is more to the report than that, however the cold was the big story of the day. I got a call from Dan asking if there was still room in the boat for the trip on Sunday. My potential partner was teetering on the edge of not going, so I said sure. We agreed to wait until it "warmed up" and decided to leave the house at 9:00 A.M. 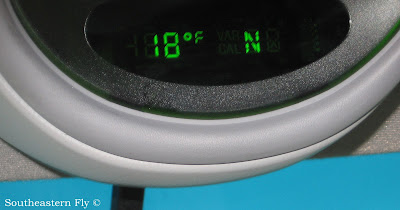 Note To Self- 18 Degrees at 9:00 A.M. is Not Warm.
Dan had just finished with a month of Christmas duties, as we all had, and he had finished the revamping his website as well. I had been cooped up in the house tying streamers, putting some touches on a presentation and working out logistics for the Tri-Cities Angler's Weekend. So, I was ready to hit the water, cold or no cold!

We were on the water by 10:30 and made the trip around the dam pool with the flow of the current. The stripers were not there, the river water was probably too cold for the bait and the shad kill did not appear to be happening. So it wasn't until we passed the ramp that we had the first strike from a trout that was smaller than what we were throwing. We both momentarily forgot about the cold. 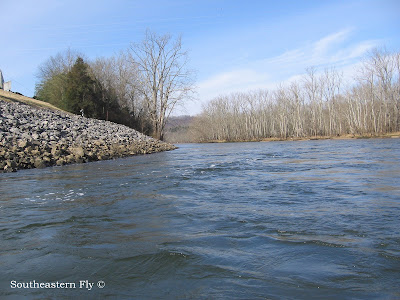 We were throwing the big stuff and had several looks and tugs, but no real players until just above Lancaster. Then we had a fish-on while throwing a rainbow pattern and then another strike while the fly was just laying on the water and Dan was trying to warm his hands. 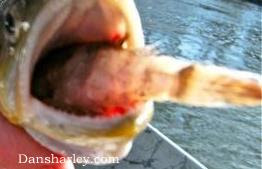 Sculpin Brown
We continued on and finally boated a respectable brown that had a 4"-5" sculpin lodged in it's throat. The tail of the sculpin was sticking out of the brown's mouth about 1/2". This supports the theory that fish eat other fish head first. However, the mystery remains as to why any fish would hit a large streamer, when it has not finished the meal it obviously was trying to digest.

Dan and I continued on downriver and I hooked up, this time with a trophy brown...

Another Note to Self: Do what the guide says and don't raise the rod tip. I cannot remember the number of times I have said this and seen this only to watch the fish roll and get off the hook. The angler (i.e. me this time) should fight the fish from belt and not raise the rod tip up until the last second, just in time to make the scoop with the net. We were quickly over losing that fish about an hour and half later.

The Army Corps was pumping water through one generator at 4250 CFS and had a somewhat constant flow going throughout our time on the water. The water was a little high, but there were some fish that came out to play and some that came out to look at the big stuff we were throwing. 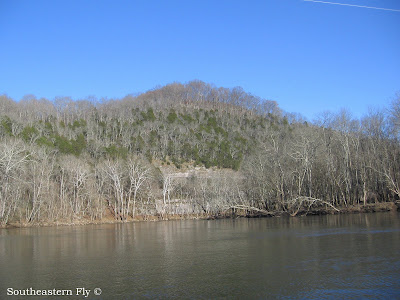 We had several more takes and hits, but only one more trophy on. This fish had experience and shook the hook before Dan could get a good hook set. The hook set wasn't from lack of trying and an angler has to wonder how a fish can get away after eating the head of a fly with two hooks. Overall the work over the past few weeks at the tying vice seems to be paying off. But, I am sure the cold weather had us both off our game just a little...or really probably more than that, but I am not ready to fully admit that just yet.

How about a night float later this week? It is supposed to be in the single digits.