I snuck off to the Obey River yesterday. Really, Mark and Aaron were going to the Obey and invited me along to enjoy a float on falling water. For most of the spring and summer last year the Obey stayed on at least one generator. Low and falling water was not an option for the majority of the year. But, now is the time to float the Obey. 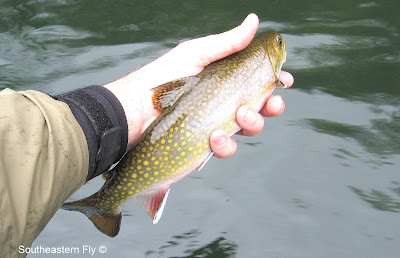 The First of Many Offerings

Waiting on the shuttle is a good opportunity to rig up the rods, sort through flies and hopefully, time permitting, to fish. The catching is not always the best at the ramp, but the casting and mending is a good tune-up for the day ahead.

While we were waiting on the shuttle I was watching a fish feed across from the ramp. This fish was set up just off the bank, on a ledge of rocks and the best news was, this fish was hungry. It was just out of casting distance, from the ramp and the pier. When we shoved off, this fish was our first of many targets. When we crossed the river, I was ready with a healthy streamer that looked like a good meal for a hungry trout. I dropped the streamer just off the bank and stripped across the rocks. The fish came from just off the ledge and chased the streamer for a short distance. Then the fish came around to taste the fly and ate it, head first. 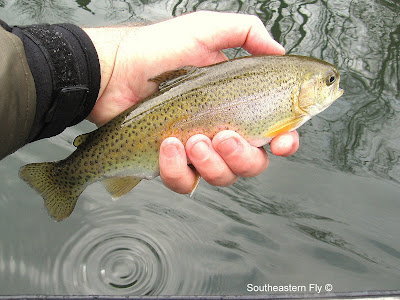 A Hatchery Brat and Perfect Circles
We floated just a few more yards when the current flowed pretty heavy over a sunken tree. One of the reasons I like to fish un-weighted streamers is they continually want to float. Add that action to a sinking line and one of the benefits is the control it gives the angler. Stripping over the sunken tree limbs was not a problem. That streamer must have looked tasty, because a large trout came out from under the tree and up to the top, behind that streamer. The trout's back was actually a little out of the water and it looked like a jet fighter that was locked in on the target. The trout took the fly and went to the bottom shaking it's head. Then it came back to the top for a series of jumps. And, just like that the fish threw the fly and returned to the bottom and we continued hit the banks. 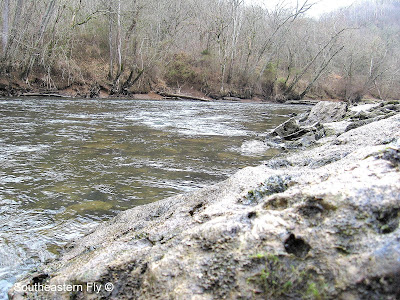 One of the Runs on Low Water 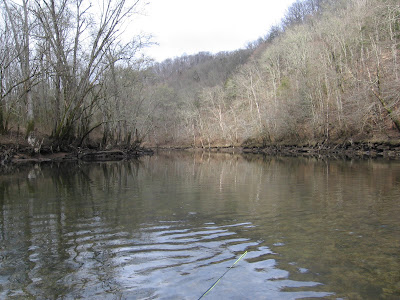 We fished streamers until the generator shut down and the water began to fall out. There was a period of slower fishing until the fish decided the water level was just right and they went back to eating. By this time we were trying different nymph patterns and taking it as easy as we could. We began consistently picking up fish just before the "lunch spot" and hunger got the best of us, so we stopped for some sandwiches and chips. I went on a scouting walk and found a fish holding in a nice pool, all by itself. Some fish are not meant to be fished for and it was time to go. So, I put that fish in the memory bank and will see if it holds there on a regular basis the next float. 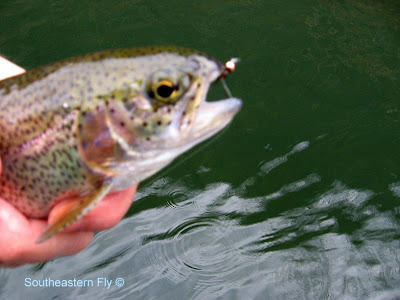 We Drowned a Few Nymphs That Must Have Taste Good 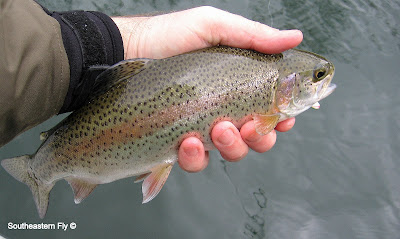 A Healthy Obey River Rainbow
We rounded out the day with a good number of fish. The float was enjoyable and provided different types of fly fishing to keep it interesting. There are a few fish that give the appearance of a hold-over and TWRA has also stocked the river with a nice helping of rainbows. There is enough action to keep it interesting and the chance a nicer fish is a real possibility. One of our previous trips to the Obey River found us at The Dale Hollow One Stop for bbq. This regular stop for dinner, after the float, has become somewhat of a routine and well worth the drive back across the river from the ramp. 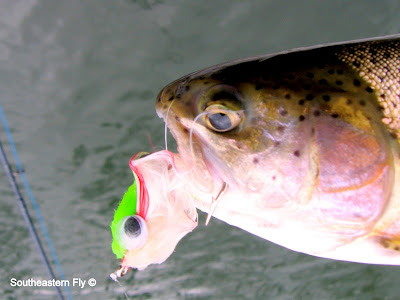 This Fish Hit a Recently Tied Pattern
Now is a good time to book a trip on the Obey. The river is holding a lot of fish, but more importantly TVA is cooperating with a generous schedule of low water. The water temps are holding in the low 40's and Dale Hollow Lake pushing clear water into the river.
To book your trip to the Obey River give us a call or send an email to david@southeasternfly.com 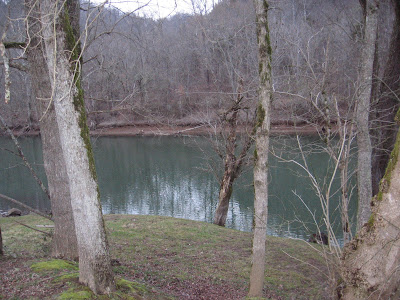