Caney Fork River After the Flood of 2010

We expected to go for a "Boat Ride" (i.e. fishing like mad, but not catching any fish because the river isn't fishing well). There were confirmed reports of water 10 feet over the banks down stream. The Cumberland River had backed up, flooding the entire lower portion of the Caney. The fishing was the least of our worries a few weeks ago when parts of Nashville were under water. Friend's homes were flooded, businesses closed and first hand stories of fatalities were far too many. Really a "boat ride" wouldn't be a bad thing and catching fish seemed to be a bonus.

The Hatchery Brats are Back
On the ride to the river we discussed the Army Corps response to the 500 year flood event. We reviewed the water levels in the river, the generation schedule for the day and the 20,000 + cfs release over extended periods of time. The day seemed grim, but there was only one way to find out if the river was still fishable. We unloded the boat and rigged up the rods. 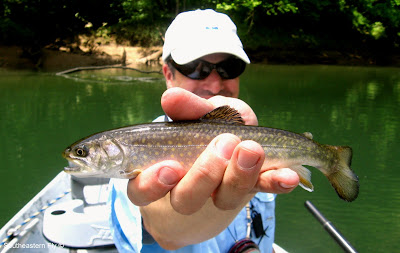 Hold That Brookie a Little Closer to the Camera
The fish were rising and we fished dries for a short time. Most of the fish that were rising were shad, but on occasion, a trout splash in the big back eddy at the dam. Soon we were on streamers and the fish were flashing. The first fish to the boat was a TN Tarpon, then another, and another, and another....and on and on. The trout would have to be agressive for food not to mention the fight for elbow room. Finally, we caught a white bass. Still no trout. Not a good sign... 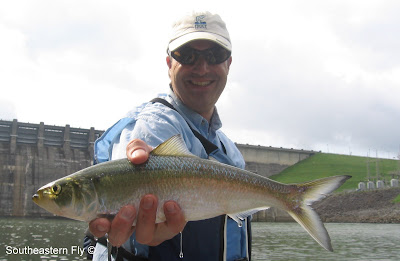 These are All Over the Dam Pool
We left the Dam Pool and started down river on one generator. We didn't have to go far before we got into trout. Then the flow slowed and the carp began to rise. These fish were huge, making big splashes, but wouldn't take the streamers (and I wasn't about to change flies yet). When the generation stopped and the water began to fall, we decided to fish nymphs and see if the hatchery brats survived the high water event. 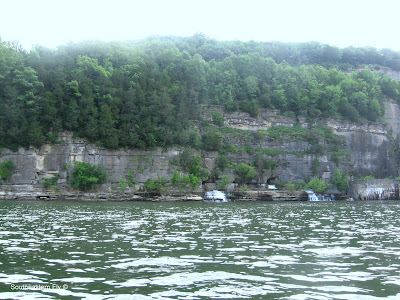 The Water Table is Still Up....Or the Leaks are Getting Worse? 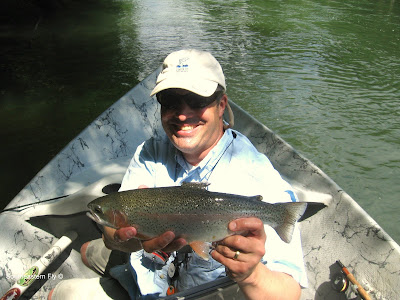 This Rainbow Hasn't Missed a Meal
We dropped the nymphs under indicators and floated a short way, then we began to pick up trout. First we caught rainbows then brook trout. We caught them up on the usual nymph/midge rig and things were continually getting better. Mark took the front of the boat after I had an extended stay in the front casting brace. 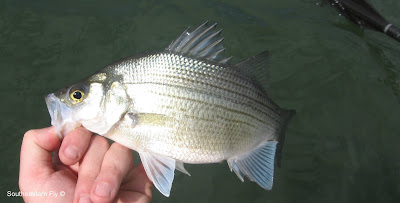 These are Way Up the River Too 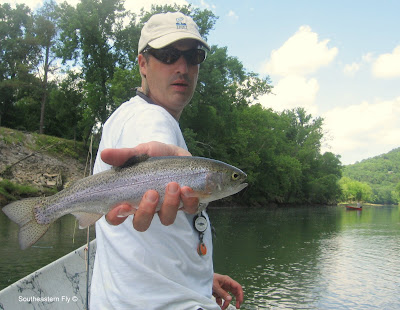 Mark With His Serious Look, the Rainbow Looks Serious Too
The water continued to drop and we went searching for moving water. Every stick, rock and shoal produced a current break, but not always fish. The fish were holding in many different areas of the river and they were making us work. But, working for the fish isn't always a bad thing and it keeps the crowd off the river. 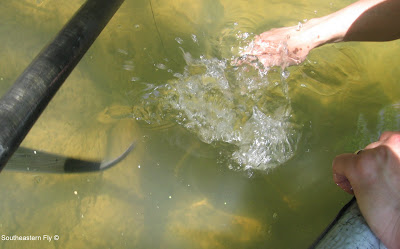 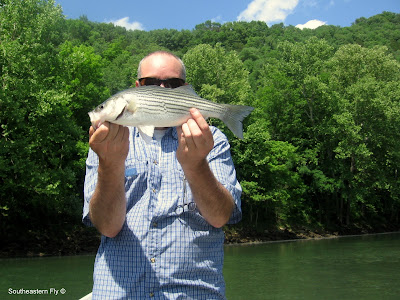 We Found Some of These
We had the pleasure of fishing the lower portion of the river with a gentleman in a canoe (we didn't catch his name). We had good conversation as he picked up rainbows and we chased browns on streamers. We picked up a couple smaller browns that completed the slam. When the slam is added to the additional species we caught, the slam becomes the Tri-fecta Slam or something like that.
So the day came to an end when we were coming down the chute and we witnessed a truck stuck in the river. A few of the locals helped to pull the truck to safety, as boats, canoes and kayaks floated to the take-out. Each craft was waiting for their turn at the ramp. We picked up a couple more rainbows before it was our turn to load the drifter and head for home.
With Summer just around the corner there is only one thing to say.... "It's On!" 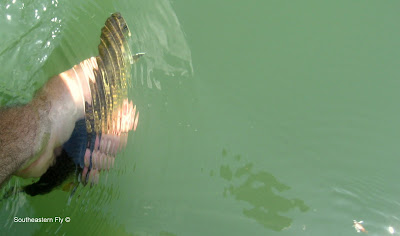