Thursday, May 27th, TWRA and the Corps of Engineers conducted a Caney Fork Workshop for fishermen, guides and the general public. I went with a group of anglers from Calvary Outfitters, listened to the information and also took some notes. Before the meeting started Linda, from the Army Corps, told us it would be death by Power Point and she was right. There was a ton of information presented. Most of it backed up what we had been seeing on the river since the big rains in the Spring of 2009. The river was fishing very good (go back and review the reports) before that rain event. Since the rains of 2009 it has been tough catching, but improving as of late.

Over the next several posts (from fishing the Caney) I will try to inject some of the information that was presented. But, here is some electro-shocking info that was quite interesting:

So, I say all that to say this... I figure "my" questions aren't: "is there grout in the water? ", "did all the fish drown or are they swimming in the Cumby?", "are the fish up-stream or downstream?". Although I have a pretty good idea of the answer to that last question.

I figure "my" question is- what are they eating and how do we get them in our boat? Because I like to fish and I like to help others get better with their fishing as well and that keeps me going to the rivers and trying to improve my skills.

We were on the river yesterday, the day following the meeting, and we caught a bunch of fish and missed a bunch too. In the next few days I will post that report, but for now, here is a pic of just one of the browns we landed while nymphing. 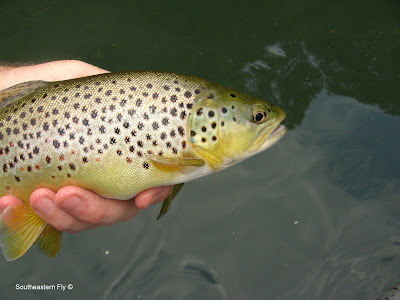