After a long Winter and Spring, Jane and I finally had a chance to hit the river. Jane is a Caney Fork angler who hasn't been to the Elk as much as some. Her preference is dry fly fishing, with streamers running a close second. Nymphs, well nymphs, are not shall we say real high on her "list of enjoyable flies". 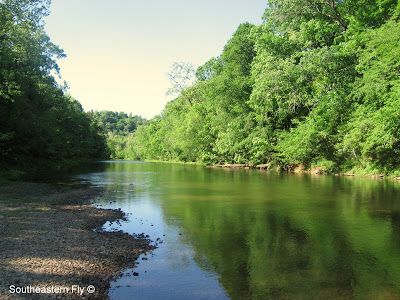 The 240 cfs is Excellent for Wading & Floating
Before I could return from the shuttle, Jane had caught a couple fish on a Humpy pattern. She was all smiles when I returned. We had a brief discussion with a couple of 7 year old boys who were the co-captains of their family canoe. While the boys ate Rice Crispy treats and paddled that canoe on gravel, we launched the drifter and turned downstream. We stopped and fished to rising fish with dries as we moved down the river. We hit a few spots with big streamers on sinking lines, however that was not the ticket as much as I liked.

This Little Stocker Was More Than 4 Miles from the Nearest Stocking Point
We switched to nymphs, after some coaxing, and this picked up some fish at Anthony's Hole. Jane and I worked on her nymphing techniques throughout the float. Jane is an accomplished angler and she picked up and the subtleties of nymphing in a quick manner. But, she is a dry fly angler and once a dry fly angler, always a dry fly angler. 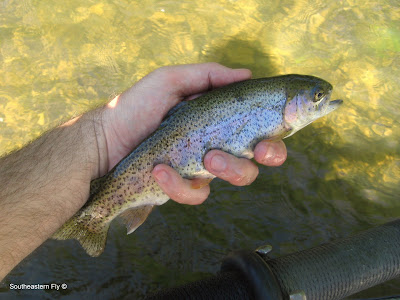 An Elk River Rainbow Caught at Anthony's Hole
The fish were holding, for the most part, in the deeper holes and at the drop-offs in the river. The water was a little stained and the recent rains had moved the shoals on the river again. Some of the shoals, created from the creeks and ditches, had moved significantly and the Bend Pool appeared to be unchanged. All the movement of the shoals and river bottom made the float much more interesting on the oars.

Mr. No Shoulders was Out in Force

Over the years I have seen many snakes on the Elk. Several years ago I was at the launch and saw a small copperhead swim across the river, eat some corn that was dropped on the bank, then swim back after filling up it's belly. The next year a water snake fell from a branch and landed about five feet from where I was fishing. That snake must have been way up in the tree, because the lowest branch was 15 feet above my head. I moved on downstream....quickly. Last year we were on a float half way down river when a snake fell from another tree and hit the water, making a splat sound. A few dozen strokes on the oars and we were out of harms way.
After many years on the water and in the woods, I have determined there are only four kinds of snakes of which to be afraid; big snakes, little snakes, live snakes and dead snakes. On this Elk float we saw a few snakes all of which met at least two of the four categories. 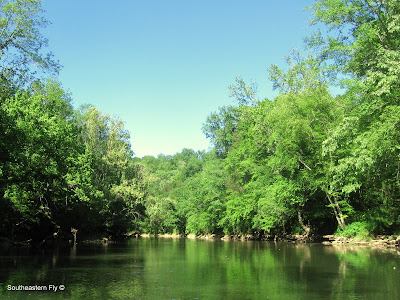 As the day went along we saw more and more hatches coming off. I had just received an order for 6 dozen flies earlier in the week and we went through most of those patterns aswe played with the fresh stockers. We ended up on parachute patterns for dries, chunky nymphs for sub surface and even had a look or two on streamers. The Crane flies were out, as were the usual mayflies and midges. I even think I spotted a caddis among all the other flies. We fished most of the patterns we wanted and caught fish throughout the day.
So, if you've read this far hopefully there is some information you will find of use. If not let me say, I would not fish the evening hatch at the Elk River without some size 12-14, cream dun patterns in my box...
Click here for the latest fishing report