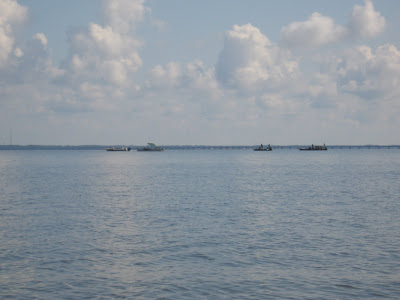 Oyster Boats on Apalachicola Bay
We went down to St George Island last week and got out on Apalachicola Bay for some red fishing. We didn't go down just for the fishing, we also went down for the great seafood and just to relax. Before we knew it the week and a couple days had past and we were back in Middle Tenneessee. And then, we were back on the Caney Fork for an afternoon float.

The Hatchery Brats Were Out Again 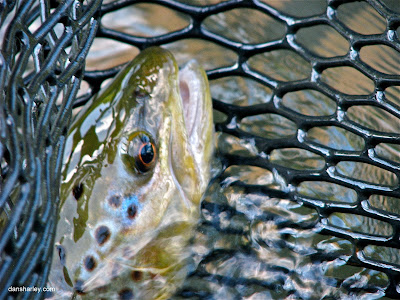 Fish Heads, Fish Heads
Dan and I started off the afternoon throwing nymphs and we picked up some of the hatchery brats. The fish we caught were eager to play, but nothing of any real size came after the drowned bugs we were presenting. Dan was quick to get on the streamers and threw those monsters of marabou for a long stretch. We had some flashes, but none of the fish committed. The best was yet to come... 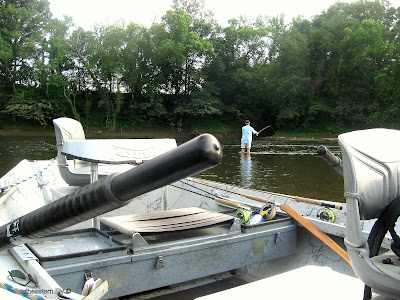 Dan Throwing a Nymph
Dan continued to fish the streamer and began to pick up consistant flashes. We stopped at a shoal and he offered room to throw a nymph. We settled into a nice drift and began to pick up fish. We probably wouldn't have stopped if Dan's streamer had not brought some fish up from the bottom. But, the streamer brought out the fish and the nymph cleaned up. We spent the majority of the afternoon at that run, which was in the shade. Dan got on the video camera and caught some footage of some takes and fights with the Caney Fork rainbows and browns. 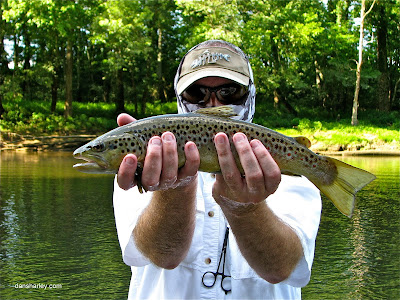 This Brown Took a While But Finally Came to the Net
We ended our float on the river by fishing the streamer and the occasional nymph. My intent was to throw some top water stuff, but sticking to the plan on my day off was, well, really out of the question and we ended up just doing whatever we wanted.
The bugs that are a little more delicate seem to live further downstream. By that I mean the mayflies, caddis and other "softer" bugs. We imagine these bugs just taste better than the scuds and sow bugs that tend to live in the water closer to the dam. I enjoy fishing some of the lower stretches of the river. We did spot some mayflies that looked to be about a size #12 or size #10. There were not as many of the better tasting bugs right now, but we'll start seeing them later in the Summer.