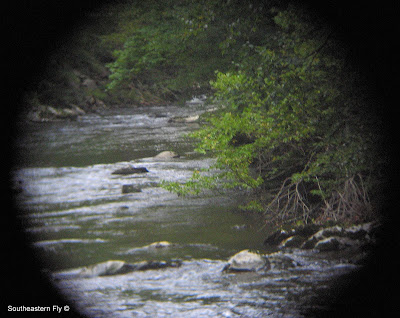 Another New Favorite Stretch of Water
The days have been cloudy in Townsend and the afternoons, down on the streams, in the park have been getting dark too early. Each day I have been lucky and have been able to get out on the water. I have been turning left at the Y and heading up Little River Road. On this day, I went up past a couple of my favorite holes, fought the urge to go back to the pool where the nice rainbow came and headed for brown trout water. The reason? I cannot remember catching a brown in the park. Everybody needs a mission, the brown trout was mine. I slowed to a stop at the roadside. 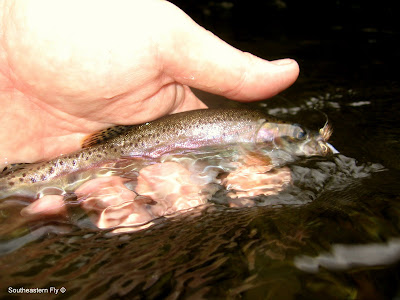 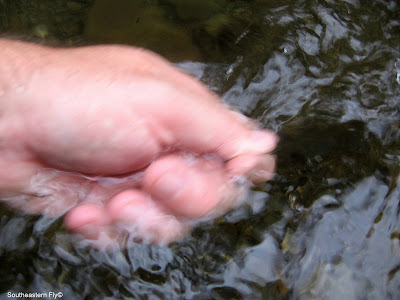 And, so the fishing began. It wasn't long before the trout began rising to the Thunderhead. There were several refusals in a row. Several is more of a general term, in this case I began to count refusals vs. counting caught fish. There were some bigger fish refusing the fly, which made me question if I should go smaller in size? I also thought about cutting the bottom hackle off the fly, lowering the fly more into the water. Sometimes fish don't seem to like those, pretty, out of the vise flies. In the end I switched to a big parachute Adams. Then the catching really began. 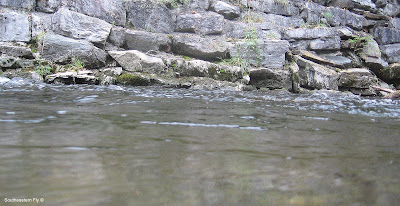 Man Made Cover
Because time was limited, I fished up Little River instead of a more remote stream. The road actually provides structure in many places. One of the rainbows came from some slow water where the current was restricted from the rocks in the wall. The fish was laying right against the wall and I was lucky when I saw him come off and hit the Adams. It was a classic take, there was no inspection time, there was no hesitation. The fish shot out of the slower water and nailed the fly. 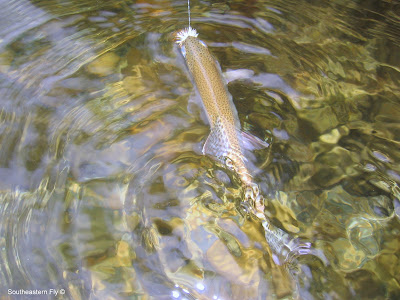 Another Rainbow
The afternoon consisted of hunting the traditional dry fly seams. The seam might be in the middle of riffles or against the outsides of a run. Anywhere the fast moving water comes together with slower moving water. Also, there was another thing that I finally remembered. Highsticking, for me anyway, means don't let any tippet touch the water, if at all possible. Any drag, even a little from the tippet, many times, meant the difference between a refusal and a hook-up. The rainbows began to come with some consistency and the brown, the brown still was not showing up. The brown didn't have to be big, it just had to be a brown.....although a big one wouldn't be a bad thing. 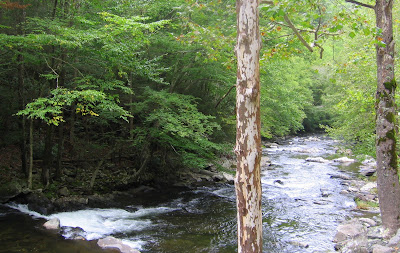 The Other End of My New Favorite Stretch of Water
The fly was tuned in, there was no doubt the Parachute Adams had proven itself for the many anglers who had used it in the Smokies before me and it had proven itself this afternoon.
The drift was finally coming around, leaving the body of the fly drifting just in the surface.
.
There was a seam between two riffles. The rocks were dark from shadows and the bottom was somewhat deep between them. The fly landed, the tippet came off the water, the fly perked up and the fish shot off the bottom. I could see the fish turn downstream and it hit the fly on a dead-run (if fish could run it would have been a dead-run). Anyway, the fish hit the fly and turned to go back to its cover. Just like that the fish was hooked and when it came to the top, I saw the butter color on the fish's underbelly. It was the fish I came for, so I took the photo, reeled up the line and headed for the truck. 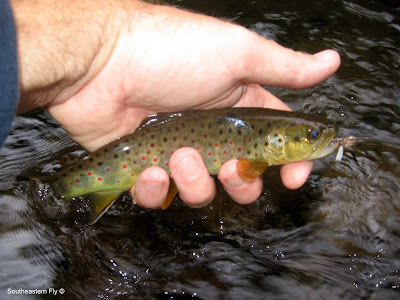