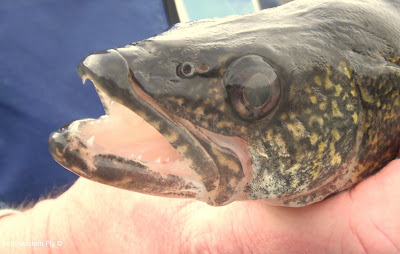 Eyeballs and Teeth
Mark J, David K and myself, all showed up at the Caney Fork River and launched the drifter on one generator. The guys were soon into fish including skip jack, with hard head-shakes and quick runs and trout also with head-shakes and an even harder fight. We started out on streamers and after everyone was comfortable the guys were into fish on a pretty regular basis. 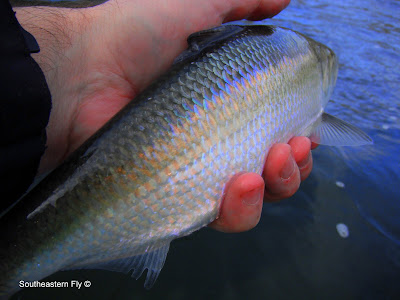 The First Fish with Lots of Color
The skipjack fishing is starting to slow just a little. These fish are a good warm-up for a fight and good casting practice that comes in handy for a day of fishing. Before we launched, Mark showed us his Streamers t-shirt and with that Mark hooked up with the first fish on a....streamer. Maybe there is something to this after all. 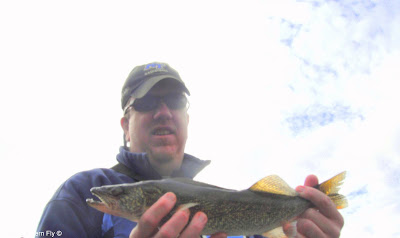 Mark Holding the First Walleye of the 2011

So we kept on throwing streamers to the fish, catching trout and TN Tarpon. The best was yet to come and with David catching skipjack and trout, Mark continued throwing the 6 wt BVK, while going for a fish that would rise to the fly on practically every cast. Fish rising and flashing will usually get bored and disappear or finally commit. This fish got a little too close and the fight was on. Mark brought the fish to the net and the first walleye of the year was in the boat before we knew it. 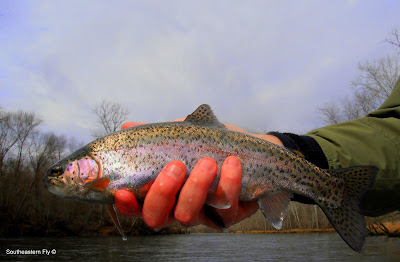 White Tips on the Fins...
We continued throwing streamers in the upper part of the river and had the usual follows, slashes and catches. But we also spent more time in the upper portion, which put us out of position for a great streamer float. We regrouped, strung up some nymph rods (that's right there are always more options on the boat) and dropped some nymphs into the fray.
The fish did not disappoint and came to the nymphs pretty quick. We continued fishing the nymphs under the indicators and the fish kept coming. They were not as active as last week, but were coming to the boat pretty regular. This began the speculation of moon phases and sun vs. clouds. Scientific theories were not determined but we did put the info in the arsenal for latter use. Angler Theories were proven and disproved. 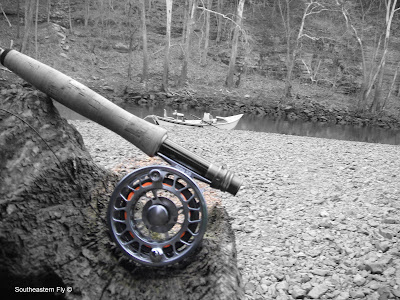 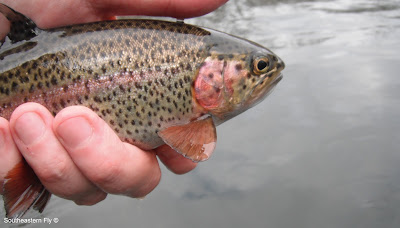 The Rainbows are Colorful and Healthy 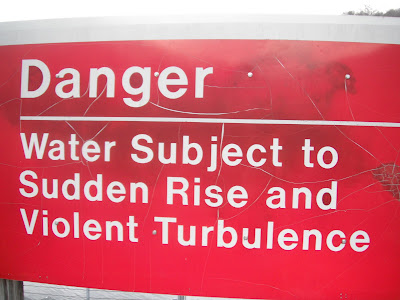 Without a Doubt
Early in the float, with the generators running, we tossed streamers to mostly rainbows. The water up by the dam can be very dangerous with one generator running it is always best to wear a life jacket and be aware of the other boats around you. Most of the other anglers are aware and courteous and a lot celebrate those good fish when one is brought to hand. 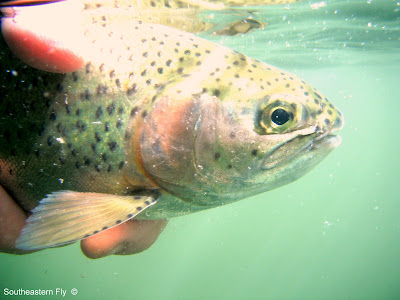 Looks Like This One Has Seen A Hook Before 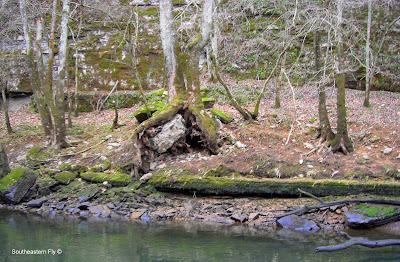 Toward the end of the day we kept floating nymphs under indicators while we fished to rising fish. The midge hatch was light but they were eating something just below the surface. The key was to find a fish that was eating and cast well upstream, then keep the best drift possible and bang set the hook. If the fish weren't feeding it usually resulted in a fishless drift. Lower water puts some nice fish down, but provides opportunity to learn the best holding areas, especially when bombing the banks, later in high water.
Learning the water is critical when fishing streamers on high water or fishing nymphs and midges on still water that has fallen out. The weather looks good this week and the generation should provide opportunities for wading as well as floating, so....make 2011 the Year of Gettin Out There. 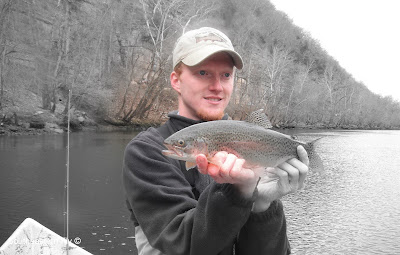