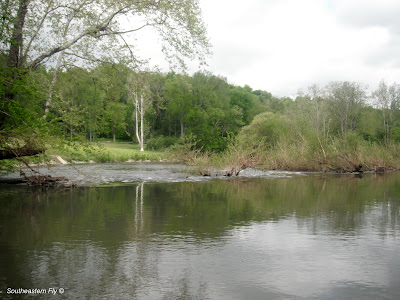 Entering One of the Fun Runs of the Day
The water levels are still high everywhere we turn. The guide trips have been postponed until we get some relief from the rains. By the time the rain slows and the trips get rescheduled it looks like the cicadas will be here and hopefully the fish will be on the gorging themselves. That's right we are hoping to fish more than just hoppers for trout and warmwater species this year.
***
Throughout the week we checked water levels that read 2000 CFS releases, 10,000 CFS releases and lake levels at 641 feet,. River levels recorded well above the mean. Streams at 4.5 ft and running 1500 CFS. Three generators here, two generators there, blah, blah, blah. Same old story same old song and dance....my friend (name that tune)
***
David and Anthony were lined up to go for an outing and I had my own motives to get a fly rod in my hands. So we met on a local warm water stream and went looking for smallmouth or whatever else we could catch. 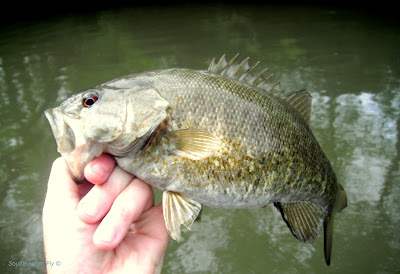 Caught on a Favorite Streamer
David and I dropped the truck and trailer at the takeout and met Anthony back at the launch. Anthony took the front brace and David slid into the back brace. Then we shoved off and when the drifter broke free from the ramp, I realized all the planning for a new water run (we will call it River Y) was coming together.
**
I was first on the oars as we maneuvered though some pretty tight places, dodged some downed trees and played tag with some big rocks. We boated some fish with the largest fish being the one you just saw up above. The water was high, the fishing slow, the water was stained and the sun was out. I think those were the excuses we came up with and used throughout the day. But the company was good and the boating was fun. On the way home Anthony and I talked about fly selection and how we experiment with patterns, which lead me to thinking about the last several years of fly fishing... 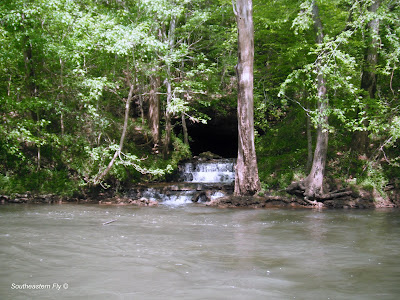 A Riverside Cave/Spring
Over the past several years I have certainly had my "go to" flies. Whether it is fishing nymphs, terrestrials, or streamers on tailwaters or on warmwater streams. Or fishing dry flies in the Smokies and Upper East TN tailwaters. My friends sometimes make fun of my willingness to stay on what I know works and truth be told, I make fun of myself too.
***
What is about someone loading up the boat, pulling it for hours to the stream or river, unloading the boat and getting out on the water to chase fish? Is it a mental thing? Is it a sport or a pass time or some wacky combination of both? There are a lot of questions that are posed and discussed. The answers to those questions are debated over time. But, one that keeps coming back to me is, why get stuck on just one pattern?
***
Here are my two cents on that last question. Some say it is confidence in the fly and to a certain extent I agree. A "go to" fly, whatever that fly might be, has proven itself day in-day out on the water. When the angler ties that knot and cinches it down, they instinctively know there is a greater chance of success. It could just be a gut feeling. However it is usually a gut feeling built on past success. Think about your "go-to" fly for just a few minutes...
***
A couple weeks back I tied on my favorite streamer. My intent was just to go out and fish. I wasn't going to be clever (that sure isn't going to happen) and I wasn't going to get worked up about catching a bunch of fish. The plan was to fish one of my go-to flies, I mean really concentrate on fishing that one pattern. There weren't any worries about the size or color, just fishing that one fly. I don't mean just throwing it out there and stripping it back either.
***
By fishing that go-to fly I mean concentration on several different things such as casting. Making sure that fly is stuck tight to the bank, close to the downfalls, or is just in the right spot to drop off the ledge a few feet into the retrieve. Which leads us to an additional part of casting. Different flies cast/fly differently. Changing flies often can lead to poor casting, if the angler is not careful and aware of the differences in weight or aerodynamic tendencies, the casts can eventually be off by inches and then feet. Sometimes not landing close to the zone. They may not be stuck tight to the bank, close to the dead fall or even too far past that ledge to be effective. That can be the difference between an OK day or an outstanding day...well that and the other 1000's of variables.
****
So now the fly is out there and it is your "go-to" fly. You don't have that wonder of-will it catch fish- remember the fly has proven itself many times prior to this day. "Fishing" that fly is the only thing the angler has to worry about. Concentration on swimming the streamer around the dead falls. Keeping that perfect drift going so that nymph slips into the strike zone unnoticed but but noticed. Sometimes that means dropping that dry fly into a small back eddy the size of a coffee cup and keeping that fly in that spot for a minute or more before a small brook trout can't stand temptation any longer. It can mean swinging that soft hackle through the current and into the face of a feeding fish. But, one thing the angler already knows is the fly can catch fish. Past success is a key factor here.
***
So what is it about that "go-to" fly? The fly may not be the same fly for everyone. Someones "go-to" fly can vary due to the circumstances and conditions. The point is, once the angler has enough success with a fly, it becomes a fly that can simply be fished based on past success.
***
Take just a minute and read back through the questions above. Think about your Go-To fly. Is the reason we have that go-to fly because of past success? Could it be a comfort level, or just a concentration on fishing that fly with a confidence built on past success? Whatever "it" is never underestimate the power of just knowing how to "fish" that fly. 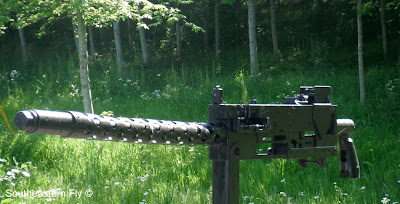 What? A Machine Gun Beside the Road...

So after the day was done Anthony and I took the long way home. We were carrying on many different discussions when we came upon a machine gun mounted on a pole beside the road. Just another day of fishing in Middle Tennessee, while we make 2011 the year of getting out there...