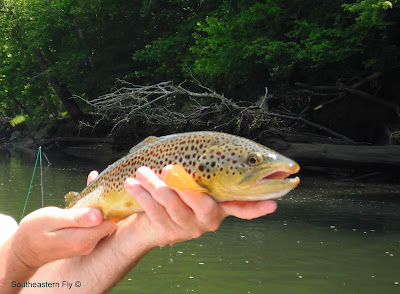 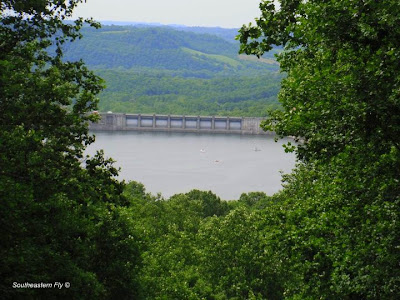 Another View of Center Hill Dam

I spent the weekend camping with the family, above Center Hill Dam and it was a nice way to spend some time together. But I think after a few days, they were ready for me to get back on the water. After such a good trip to the Elk River, heck after mostly all good trips to the Elk this year, it was time to get back on the Caney Fork. The rods were rigged and flies were tied, both waiting for me to get the chance. I spoke with Mark early in the weekend and we opted for a Memorial Day float. We had time for a half day morning float. My weapon of choice was the TFO BVK and the same couple of flies we used on the Elk last week. 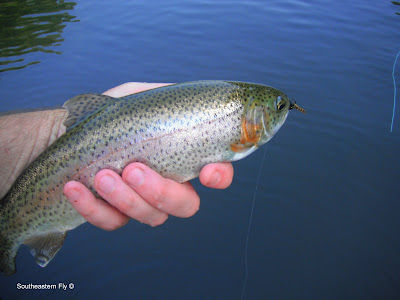 The First Fish of the Day

Like I said my weapons- the flies of choice- were the same flies we used last week. It was tough to change the flies that let us catch such nice fish on the Elk and let's face it, when I am fishing for fun, I can be pretty darned lazy. Lazy worked this time as the first fish came up early for a "slow roll take" on top. The fish came up with the dorsal out of the water, then the head came up, the mouth opened and the fish ate the fly in slow motion. The take was a thing of beauty and things just got better as the day went along.

So what pattern was on the rod? Because it should be common knowledge now and because even the local news channels are talking, I have named the patterns #13 and Capt'n Obvious... If you are thinking that anyone can throw-on any pattern and have a good day, well you might be right...but, if you want to know the difference between a 'good day' on the water and a 'sick day' on the water, then do your homework. I say that because the pattern matters and the pattern can change between morning and afternoon. It was my turn to row the boat, which put Mark up front with the BVK and #13. 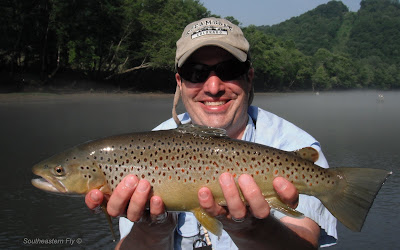 We went through some good water and Mark picked up a couple fish here and there on #13. Then we entered some good shoals and some good bank structure. Mark stuck the fly in a nice little pool and after a big splash, the fight was on. The fish went for and came out of some structure then it headed to open water. After a bit more of a fight the brown headed for the net and a short time later the hero shot. 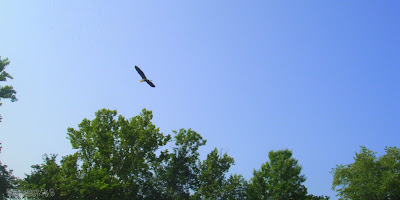 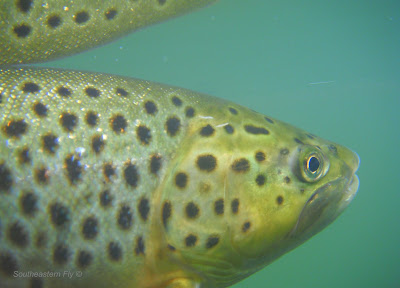 Reflections from a Brown Trout

Finally...it was my turn again. Mark put me on some good water, but I was in a slump. I think he put the voo-doo on my set-up (not really but...), so I changed to a nymph and picked up a few more rainbows and another medium sized brown or two. We swapped back and forth fishing nymphs until we came to some better water. 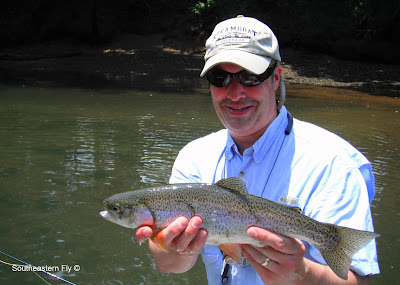 Mark on the Second Pattern

I stayed on #13 and rowed while we put Mark on another pattern I have been working on- that is now named Capt'n Obvious. #13 began to fade and the Capt'n Obvious pattern started coming alive. Mark was picking up fish 3 to my 1. After a good stretch of river it was soon time for him to get back on the oars and let me concentrate on some of the better water. 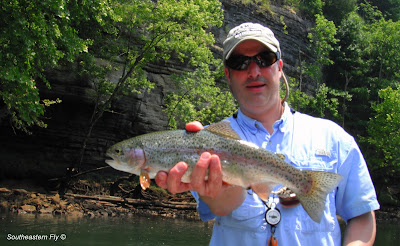 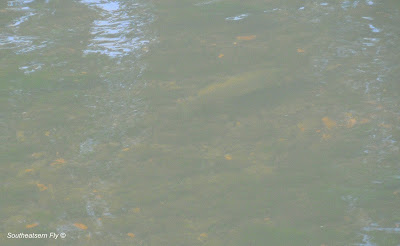 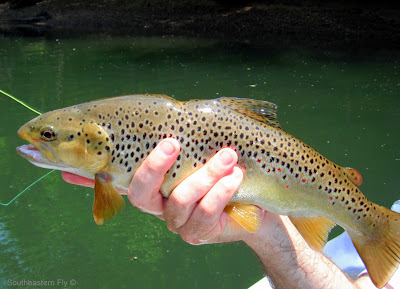 Look at the Back on This Brown

I switched over to Capt'n Obvious and within a few casts a brown, that looks like it lost a fight with a heron early in life, came out from a likely spot and nailed the fly. This fish had some experience and went straight for a blowdown. Mark got us over to the fish and after some untangling and a little rod work the fish was in the net. Finally my day was starting to crank up. 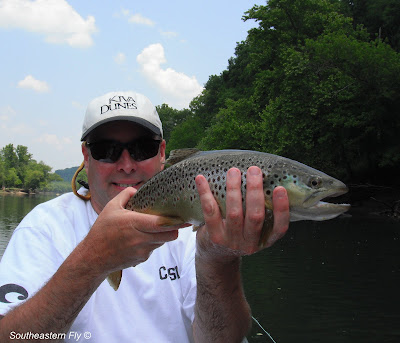 The First 20 of Spring

We continued down the river, soon there were boats and canoes going by and a couple stacking up behind us. It is always good to be in the casting brace where everything is easier to see. The view was great when a big brown shot off the bank- rolled up onto its side and took the fly with a big splash. It was all purely visual and almost like poetry, only a lot more violent. It was not unlike all that crap we read in the fly fishing books and articles. Stuff that makes us want to sell everything and move to St. Somewhere-Else to fish all day and tie flies while chasing off bears at night. It was epic stuff... 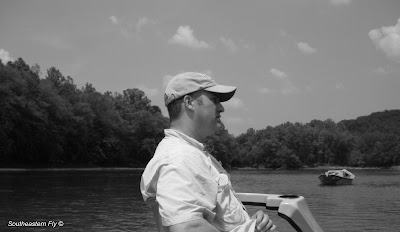 Waiting in the Conga-line at the Takeout

If you have been waiting to Get Out There for some reason or another, now is the time. There are some open dates on the calendar and we have capabilities for up to three boats. If you want to book a trip or are reading this for your own info, now is the time to get off the couch and out to your favorite stream...
Posted by ____________________________ at 5:26 PM