Floating with Mark and Pete 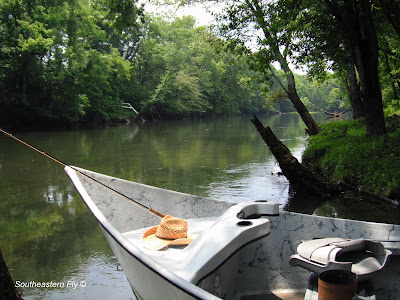 Backed In & Watching the River Go By 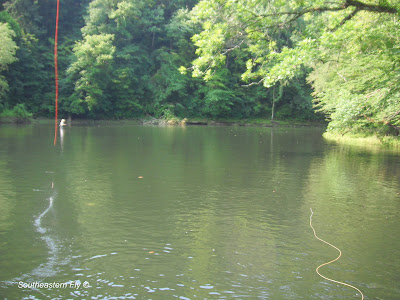 Early Morning at the Bend Pool
Mark called last week to book a trip himself and his younger brother Pete. Mark and I fished together a couple weeks back and had a rainy day. The first time Mark was on the boat, we fished the Caney Fork River and had a pretty good day. According to Mark this time it was Pete's trip. Pete was ready for the day and when we met to go to the river Pete had his gear ready for action.
***
We launched the boat and went to work on the nymph rigs. The fishing was OK but not what we were looking for. Most of the fish were smallish, but they also looked healthy. The bugs started popping and the fish began to rise. Finally, the fish began the big splashes and we were on dries and going after the splashiest of rises. 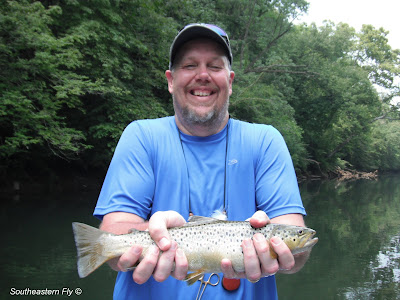 Pete with a Nice Brown Picked Off With the Dry
Pete had the front of the boat and both guys were working the banks. We got into a particularly good section of river. We were working the fish and then it happened. Pete hit the exact spot he needed to hit and the brown responded. The fly was stuck right in the roof of the brown's mouth. The fish came quickly but not quietly to the boat. Before we knew it we were taking pictures to remember the day and the fish. After we took the appropriate shots I think we saw Floady, Broady and Jody Boatwood in a group of canoes again. Dang it was a scary sight.
***
The fishing was beginning to turn. Mark was proud of his brother and Pete was a happy guy. Lunch was just around the corner and the storms weren't far behind. Just so everyone knows, anytime Mark gets on the drifter it seems to rain and most times, heck every time we have fished it has rained hard. 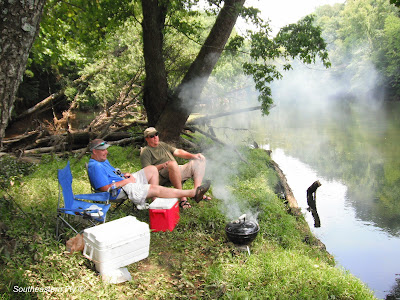 Pete and Mark Waiting on the Cedar Planked Grilled Salmon 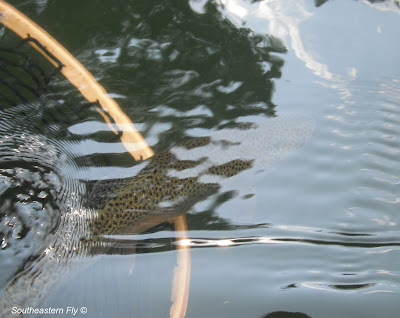 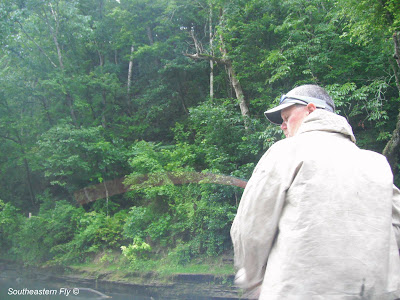 Pete Hard at Work
After lunch the guys went to work on the top water. Pete continued to work on the fish and Mark put some in the boat as well. The fishing was slower than I like but we brought some quality fish to the net. When the storms came we pulled to the side of the river and waited, discussed life, music and of course fishing. Then we pulled back into the flow and continued the search for fish. 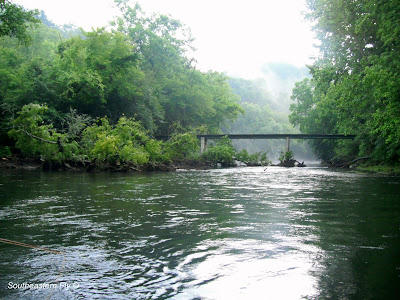 Which Way? There Was No a Good Way Around
There is one spot in the river that holds blowdowns. I have been watching the trees stack up on the best flow around the island. The last round of generation moved the trees. The heavy generation pushed whole trees into the bridge. The way through is now blocked except for one small spot on the right side. That spot had a log across it, so we pushed the boat over the log and through the only spot that would allow any progress. With some pushing, shoving and lots of tugging we got the drifter to the other side and went back to the nymphs. Those nymphs produced some fish for the rest of the trip. 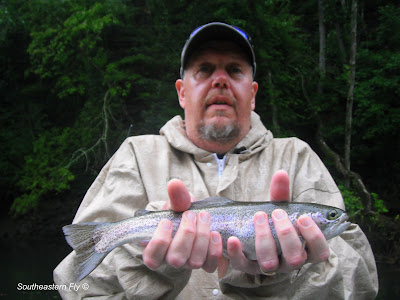 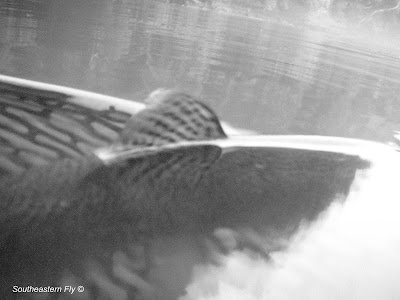 Fins Up
It was a pretty good trip for the guys. One of the cool things about guiding in the drifter is you get to know the people and watch people interact. Mark seemed to genuinely happy for his brother Pete's success. Pete had what he said was his biggest brown on the fly rod, while we all survived thunderstorms and bridge crossings. We missed some completely, lost some after a short fight and caught some fair & square. I can't wait for next year when Mark and Pete come back for their next trip in the drifter.