The Elk River- This week TVA dialed back the release from 800+ CFS to the normal release of 240 CFS. The future generation for the next few days shows the same 240 CFS release. It is Fall and time to start the lake draw-down  Be sure to check the generation schedule close and keep your eyes  on the "Hourly Discharge" on the TVA website. The release has been coming from the release gates and not necessarily through the generator. If you are wading down the river keep your eyes open for a possible unexpected release. Rumors of non-published releases are swirling. 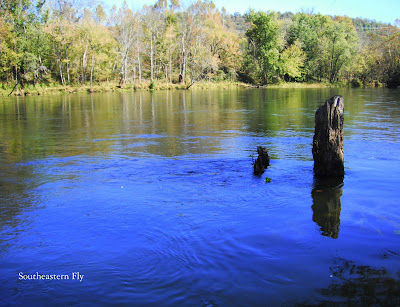 The fishing has been OK on the Elk. Using nymphs and small streamers has been working pretty good. Most of the fish are eating below the surface so dries can be tough. Swinging soft hackles through faster moving water has been taking some fish as well. The temps remain around the 58 degree mark and when the water clears, anglers will have opportunities for more fish.

The Caney Fork- There have been some discussions concerning the water clarity, dissolved oxygen levels and general overall poor water quality of the Caney lately. The sluice water is dingy green with lots of roughage and junk mixed in. The fishing has been off as of late, compared to earlier in the year. The water is clearing just a bit and visibility is about 4' now. The water temps are still running in the 62 - 63 degree mark, according to my thermometer which is tied to about 4' of 20 lb floro and dropped over the side of the drifter (hi-tech stuff- this trout fishing ).
I was going to take a couple weeks off, but....David and I got out for a day on the river. The sky is clear right now and Fall is in full swing. That begs the question....is fishing better on a cloudy day or is that just a myth? David brought a streamer rod and, as he said, he was going to throw "the groceries".  He arrived with some really nice looking articulated goodies as well as some nice single hook creations.  My plan was to throw streamers, dries and nymphs or just about everything. We were lucky and caught fish on all of them.   We started out the day with me in the casting brace throwing a really nice shad type pattern that we used earlier in the year. We tried different retrieves, against the bank but the fish weren't interested. We switched colors, patterns and anglers. Then David hooked up while banging the banks with an articulated fly.  He immediately got the chance to row again. 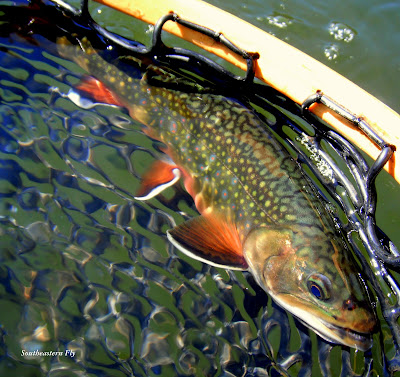 Leo at Cumberland Transit loaned me a Cortland Big Sky 9'-5wt and asked me to give it a try. I have seen these rods in the shop but haven't really given them a second glance. Before this day was over the rod would get a good test.  We rigged  double nymph set-up and picked up some fish. We spotted some fish here and there. The brook trout are pretty active right now. Some  of the brookies are in full color and some are silvery with almost no color. All the fish looked relatively healthy.
The rainbows in the Middle Tennessee rivers are looking pretty healthy.  We caught them on mostly nymphs and dries, but we also had some swings and misses on streamers.  The bows are feeding more toward the top of the water column and their colors really pop when they come to the fly.
Those of you who have been following this report for a while, know that I have been fishing more dry flies this year than ever before. For me dry fly fishing started in the Smokies. When we came to Middle Tennessee, nymphs and soft hackles seemed to be the way to go. Dry flies never have left my mind and regular trips to the Smokies seemed to give me "the fix" that an angler needs from time to time. As this year has gone along more clients want to fish dries. They understand numbers can be tough when fishing dries, but when an angler fishes to the fish, sees the fish comes to the fly and then eat, it is a great day.
There are some times of the day that dries fish better. They don't necessarily fish better than other types of flies, it is just that at certain times, dries just fish better than they would at other times of the day. There have been some interesting hatches coming off lately. We've seen lots of midges as usual, caddis from size 20 to 14's bouncing around like caddis do, yellow stoneflies and some small-almost tiny crane flies as well.  David and I fished to a pod of rainbows for a while. These fish were feeding and leaving that bubble on the surface in the middle of the rise almost every time they would eat. We began tying on dries. The fish were picky and we had several (OK we had a lot) of refusals, until we landed on the right pattern.  When we did land on the right pattern, well, it was a great day!