Call It & Catch It

"There's one working on the left up there"...."If you can call it, then catch it". Butch came in from Mississippi for a family visit with Ronnie. They both enjoy fly fishing and enjoy the outdoors, so they ended up on the drifter stalking trout. It was apparent from the their first casts, both Ronnie and Butch are no strangers to the long rods. While I ran the shuttle the guys warmed up their casting arms for the day's events.

Last week we found out the hatchery was a little behind on the stocking. They have since visited all the tailwaters we fish in Middle TN. Early in this trip Butch landed his nymph in the right spot at the right time, a rainbow came to the fly and ate. Butch brought the hatchery brat to the net and before we knew it the skunk was off. Ronnie was up next and landed a cast between two limbs of an old blowdown. The fly settled and the indicator went under. This is a shallow stretch of river and at first I thought the fly might have snagged the bottom. Ronnie had other ideas and quickly hooked up with a rainbow of his own. He raised the rod tip and the rainbow came out and over the snags of the blowdown. This fight was a little longer than our first rainbow, but finally the fish gave up and came to the net. After a quick photo the fish was revived and released.

Ronnie backed up his first rainbow with a brown, then the guys hit the likely spots as we kept moving down the river. They settled into casting from a drift boat, while making the appropriate mends at the right time and all the other stuff that goes along with a day in the drifter.  As we continued downstream, the fishing  was going a bit better than the catching. Then we entered one of my favorite stretches of river and we started picking up a few more fish. The catching seemed to come in groups on this float. If you caught one and stayed with it, then there would be another a short time later.  We stayed with nymphs because the rises were sporadic and lets face it, this time of year nymphs just work. 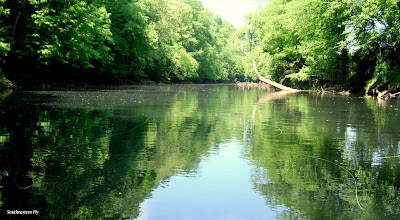 Butch was starting to pick up fish with more consistency, while Ronnie was holding his own. We decided to make a move to a hole just before lunch. This hole usually holds some nice fish, but it lacks a name... We slipped in and Butch picked up a bow off the shoals, almost immediately. We had a couple other opportunities, but couldn't hook up. I put the drifter into position for Ronnie to work a group of tree roots. He landed the cast, but didn't connect. He had to re-position the fly and when he came out for the backcast the tippet tangled at the fly. Butch didn't waste any time moving into Ronnie's tree roots and "bogarted" the water for himself. As we tended to the tangle, Butch set the hook on a fish and we had a good laugh, then we saw the fish which was now pulling us around the pool. We realized it was a brown, a really nice brown. The fish even looked big in the water and made a few runs just to show off. After a few more stunts the fish jumped, turned its head to make another run, then broke the tippet... It was over, and Butch was standing there with a tippet and indicator. Ronnie and I made the appropriate comments about moving into another angler's water and taking another man's fish. Then it was time to eat, so we stopped to grill some burgers... and let Butch stew on a lost fish. I have to admit I stewed with him! We ate lunch while we went through all the what if's and soon we were back in the boat.

Sometimes it is just your day... After lunch we hit a couple more likely spots. The guys were settled in to their routine of casting, mending, and drifting. Then the guys cast, mended and drifted the nymphs some more. Ronnie and Butch resumed fishing the seams after lunch. Butch hooked up again. When he set the hook and started the fight, the fish pulled back. This fish was sitting on the outside of the seam and when Butch's fly came down the feeding lane the fish must have moved in and took the fly. The fish made a run further into the moving water, but Butch was on it. The fish made the usual run under the boat, but a pull on the oar spun Butch around and he brought the fish out and into the slack water. The fish wasn't done. When Butch got the rainbow's head up and coming toward the net, the first two times, it made a break again. Finally the fish gave up and came to the net.  Butch had recovered from the earlier brown. We laughed that he even fished his own water to get this one. This fish just missed the 20 + Club, but it is still a healthy rainbow, with all it's fins and a defined pink stripe. The top of the fish is the dark green color that we all like to see.  We took the photos and revived the fish in the moving water. When this rainbow was ready to go there was no mistaking and we released it back into the area from which it came. 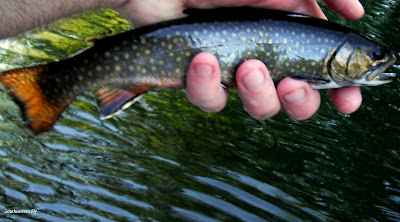 As usual daylight was becoming a problem, so we started for the take out. The guys fished off and on through the various shoals and pools. Both anglers boated fish, but at some point  the guys were just riding in the drifter taking in the day. Butch spotted a fish rising downstream and casually mentioned  "there's one working on the left up there".  Ronnie said "If you can call it, then catch it, we will be impressed" and I chimed in with "well it is his day". We all laughed as the drifter glided toward the rise ring. Butch unhooked the fly from the keeper, stripped off some line and raised the rod. He made a couple false casts and dropped the fly just above the rise and right inline. The fly drifted along for a while and just when we thought it wasn't going to happen, Butch proved us wrong by sticking with the drift and showing some persistence. The fish ate and Butch set the hook on a nice brook trout. He brought a nice colored brookie to the net. Butch called it and caught it...and we were impressed.
Posted by ____________________________ at 11:20 AM