Fish Caught & Lost- It has been a week of more rain throughout Middle Tennessee, that's for sure. We also woke up to snow one morning, but late sleepers likely never knew because the snow was gone by 10:00 a.m. With all the recent rain, generation has been pretty big. Fortunately we have caught the rivers on low generation over the past few weeks and the fish have responded well. 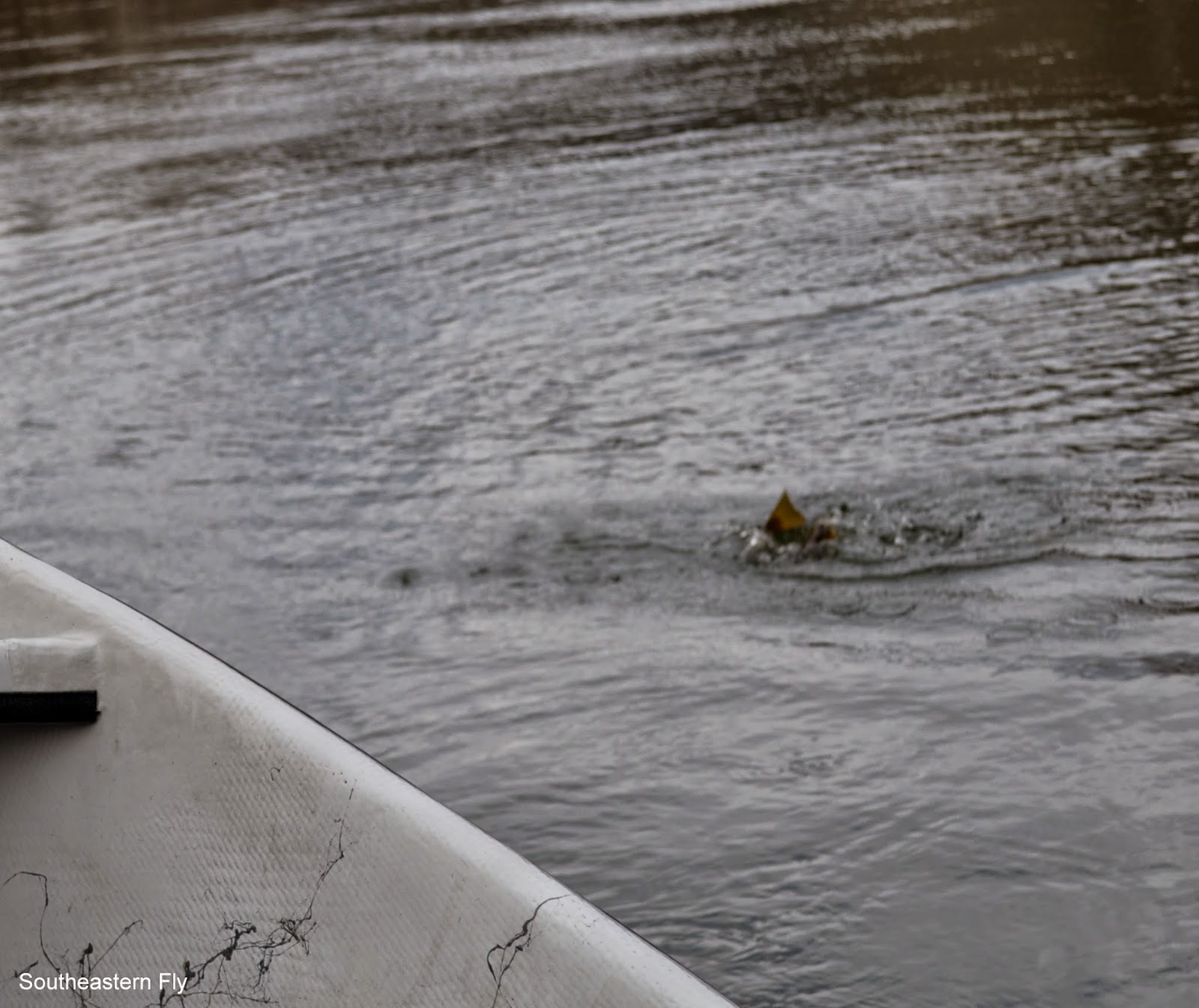 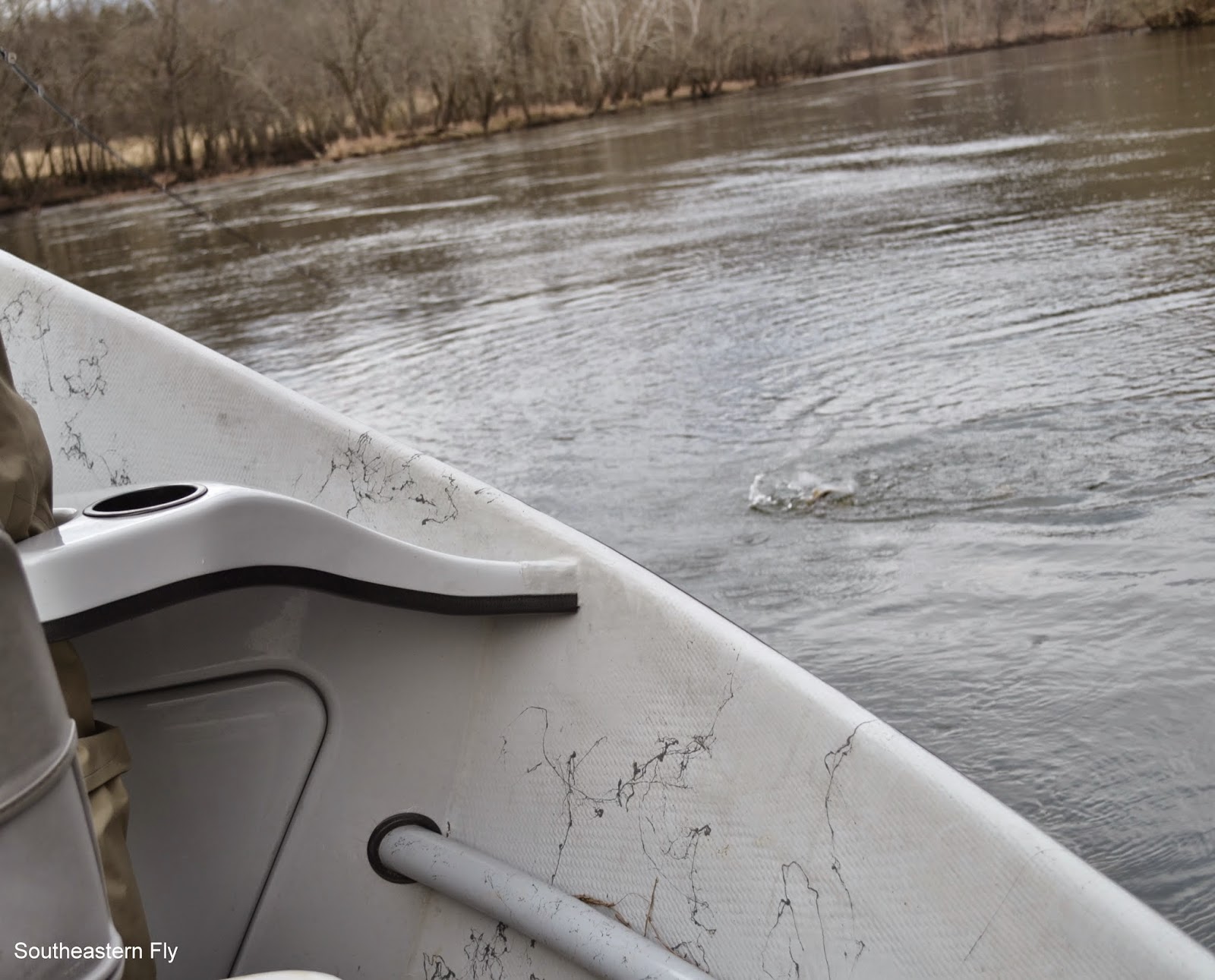 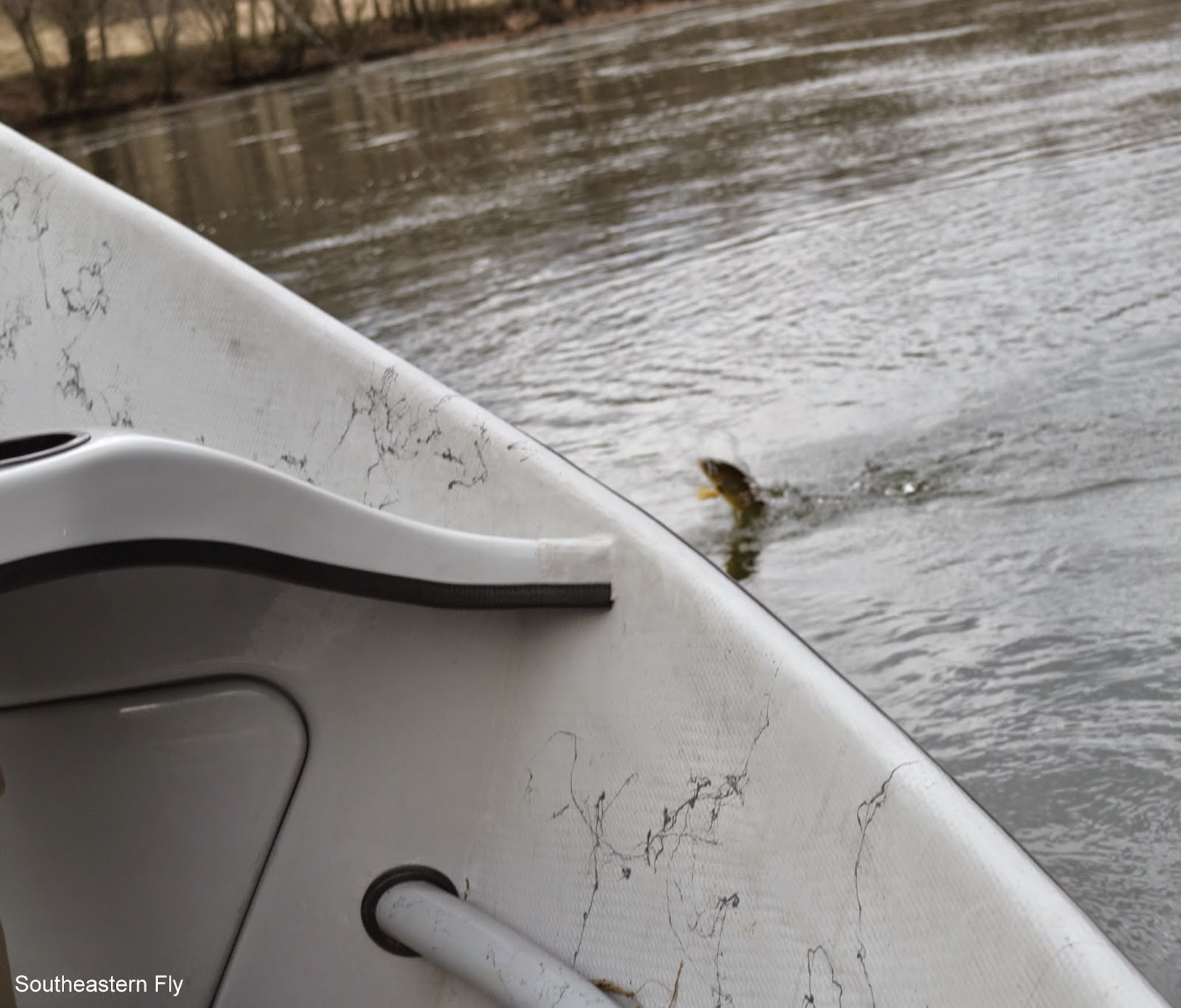 The Elk River- Some days TVA has given us falling water. As I say with regularity, if you get a chance to fish falling water by all means fish falling water. It is Winter and anglers need to take advantage of every opportunity. Falling water on the Elk fishes best with nymphs, even when every bone in an old angling body says to throw the groceries at 'em. Set the depth a bit deeper if using a dry-dropper or indicator rig. Adjust the depth as the water level decreases. 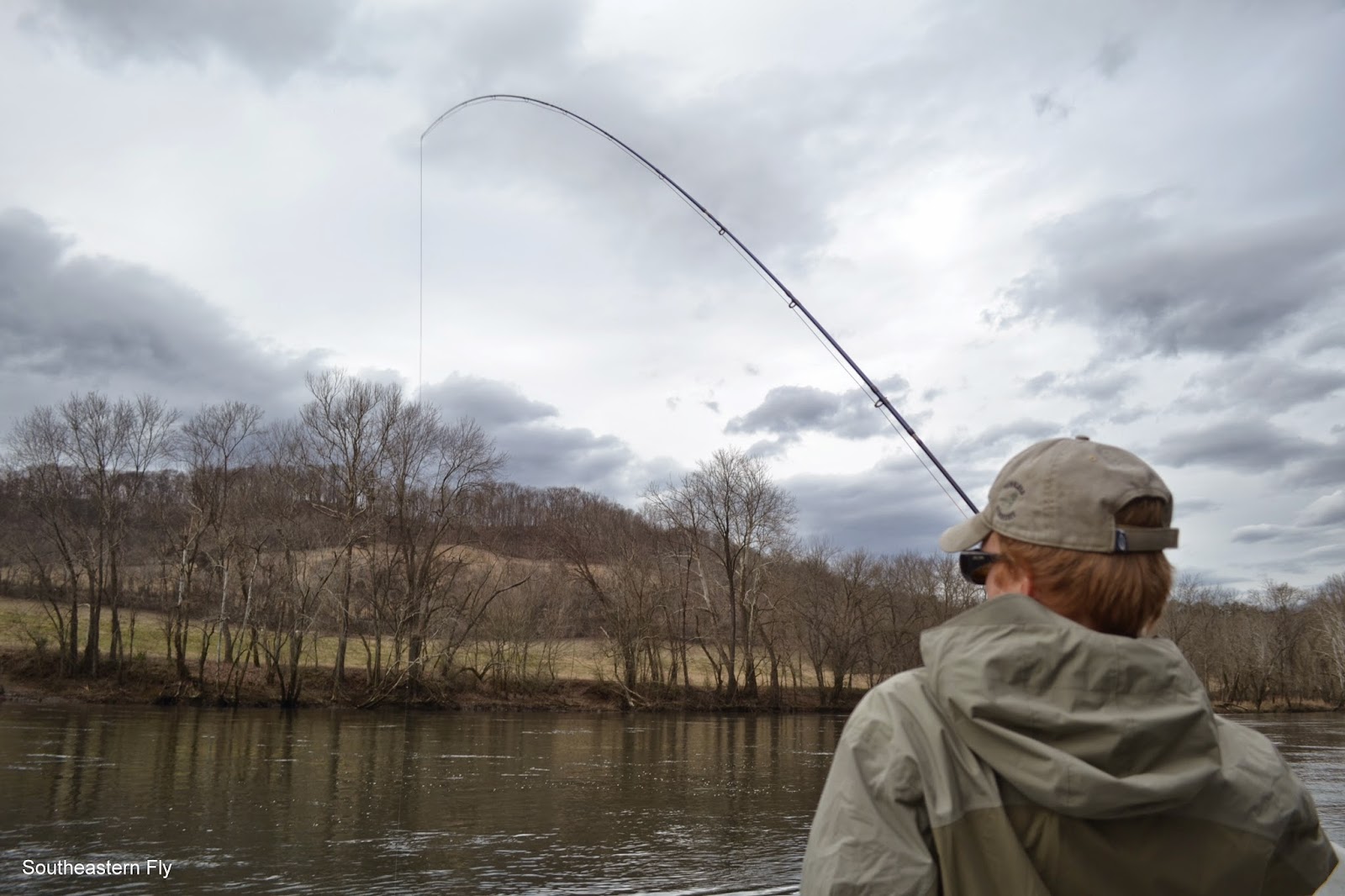 When fishing the Elk also take into consideration fishing above and below the shoals. As a very general rule, when wading and hitting shoals, it is good to fish the moving water below the shoal early and then a bit after lunch move to more flat water above the shoal. The right depth on the nymph is critical, especially when fishing moving water below a shoal. Getting enough weight on the fly and making sure the fly is getting in their face is very important. The trout normally don't venture out quite as far for a meal during the Winter. 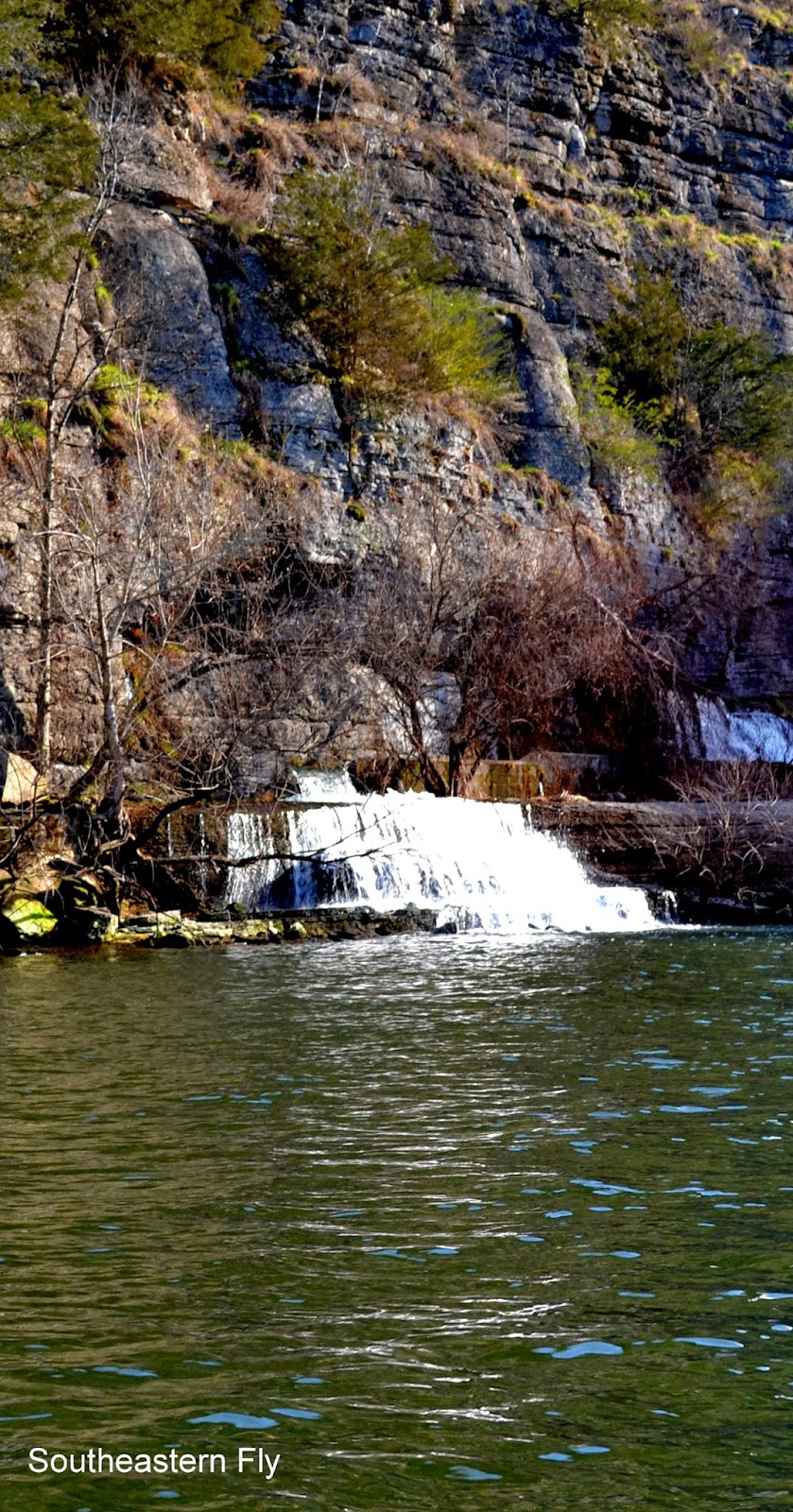 The Caney Fork-  We have seen some heavy generation and even some spilling over the past few weeks.  We go to the river in all types of weather, yes I have pushed the drifter down the ramp at Happy Hollow on a 13 degree day because the ramp was iced over and we wanted to fish. Between Columbia, heavy wool and possibly a bit short on brains, weather isn't much of a deterrent. Weather is one thing, but fishing super-high water is something entirely different and sometimes turns fishing into more of a boat ride. But, you don't know 'til you go. 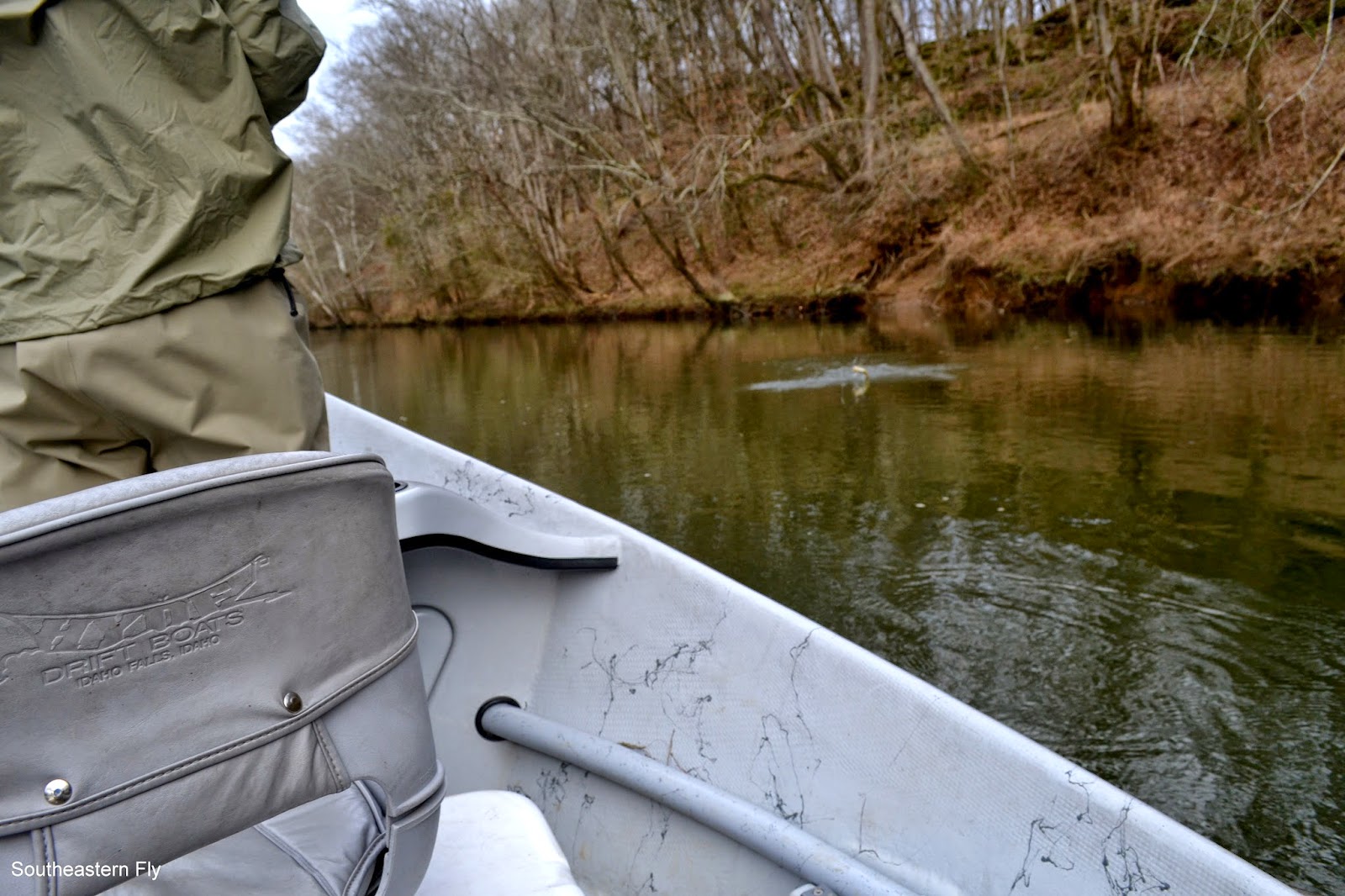 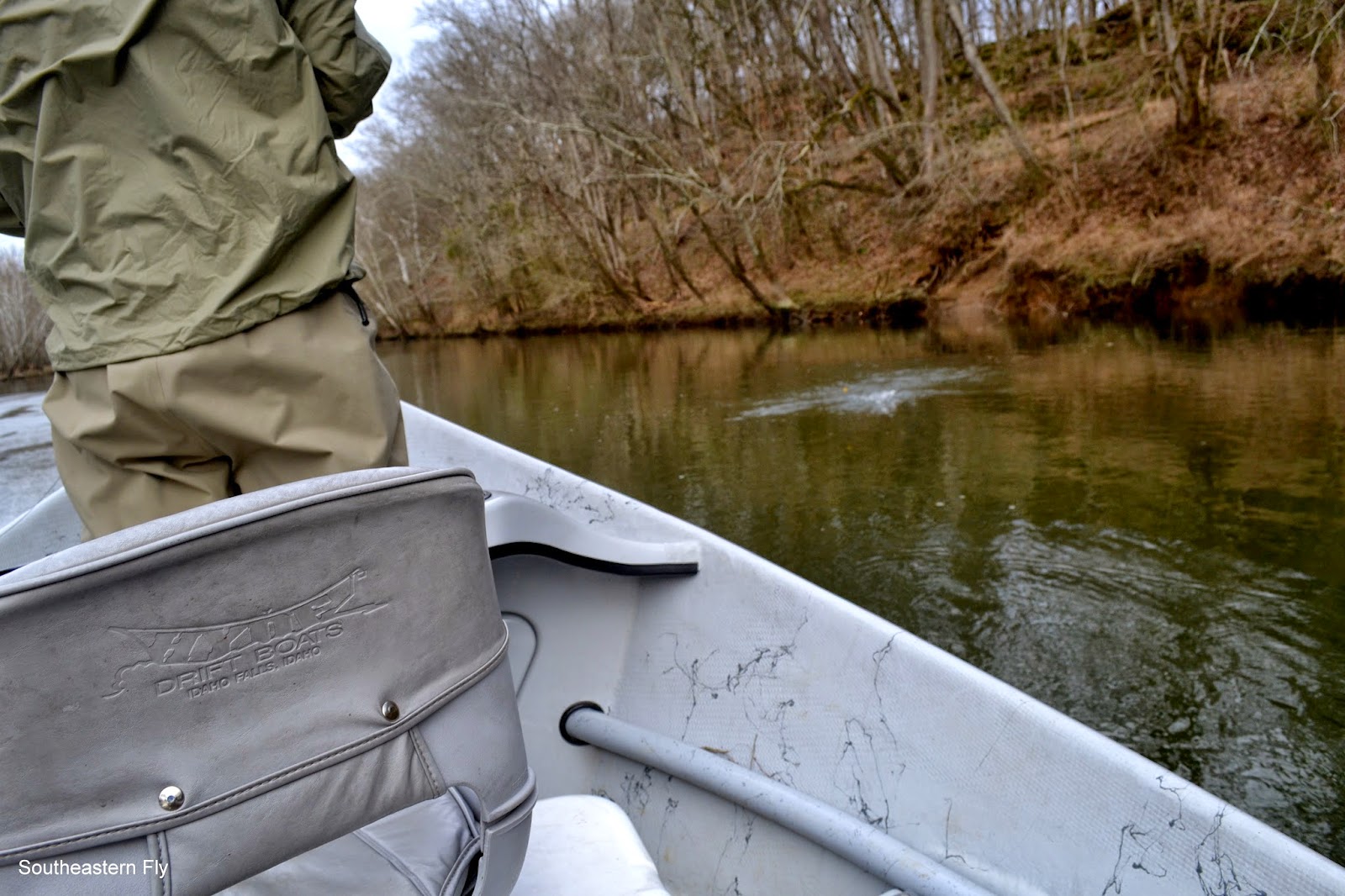 Catching on one generator can be good this time of year and getting a constant one generator release would be prime time to throw some meaty streamers. We haven't gotten the opportunity to fish a one generator constant flow, but we take the transition from two generators to one generator pretty serious too. Heavy sinking lines and a fly with enough weight to break through the surface will get those streamers in front of the fish, the rest is between you and the fish. Frankly we have been catching solid numbers when pulling streamers so that's what we will be doing while the we are getting this type of release. 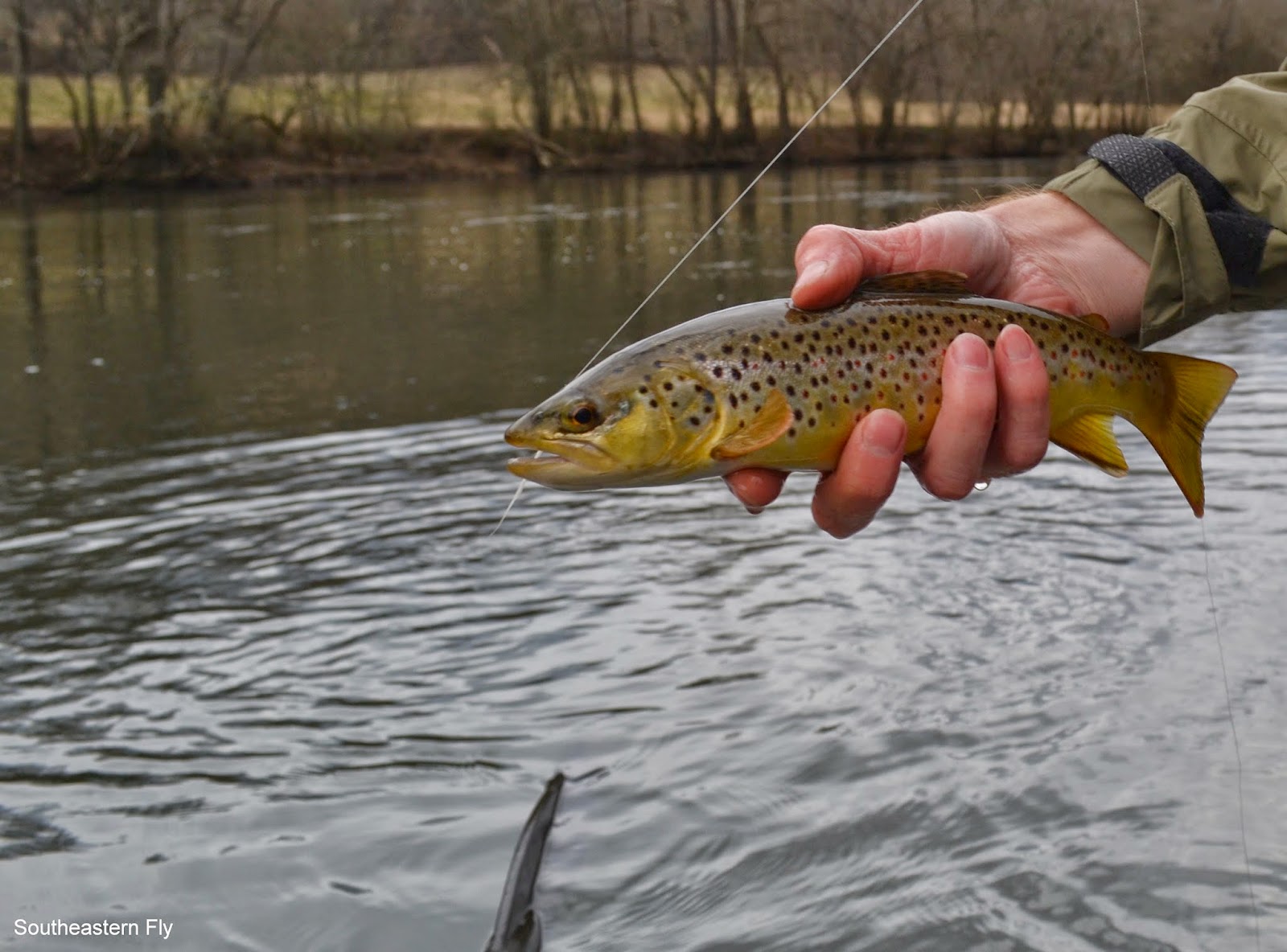 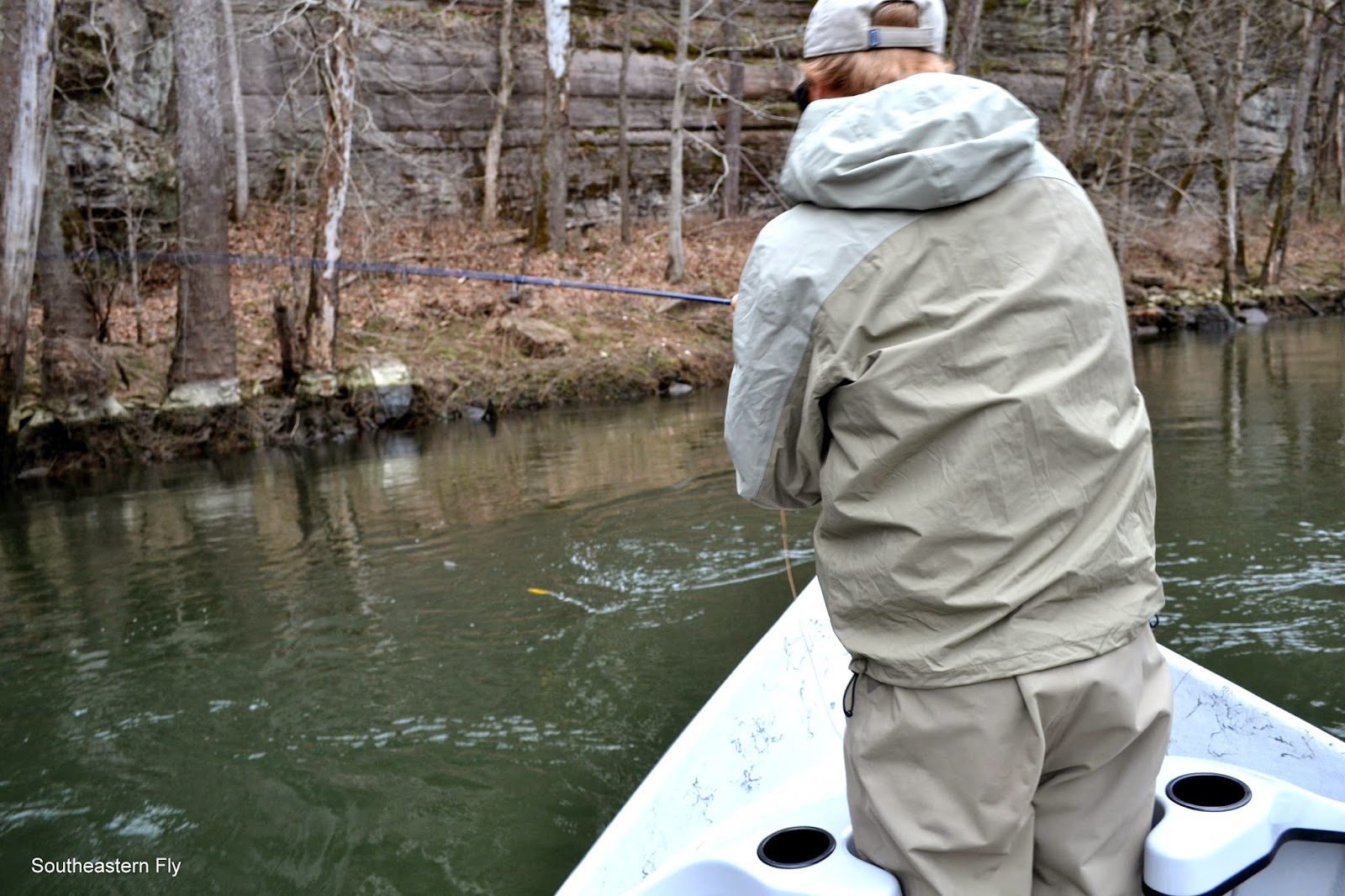 OK, so we have been getting good numbers and had our chances at some really nice fish. There are times that things just don't work out. Like the photo above. The photo is a fly just as it comes unbuttoned. So here is what happened...

Ten minutes before this photo was taken we had a big brown follow and then ghost at the last second. A short time later we came into the next high-value area and had another follow from another nice brown. The brown ate right at the boat and then turned hard to the bank when it felt the pressure of the rod. The fish ran around the front of the drifter and made a couple jumps. The next thing we knew the fly was coming out of the water and the pressure on the rod was gone. It looked like everything was going well and then it was over as fast as it began. Fish lost... 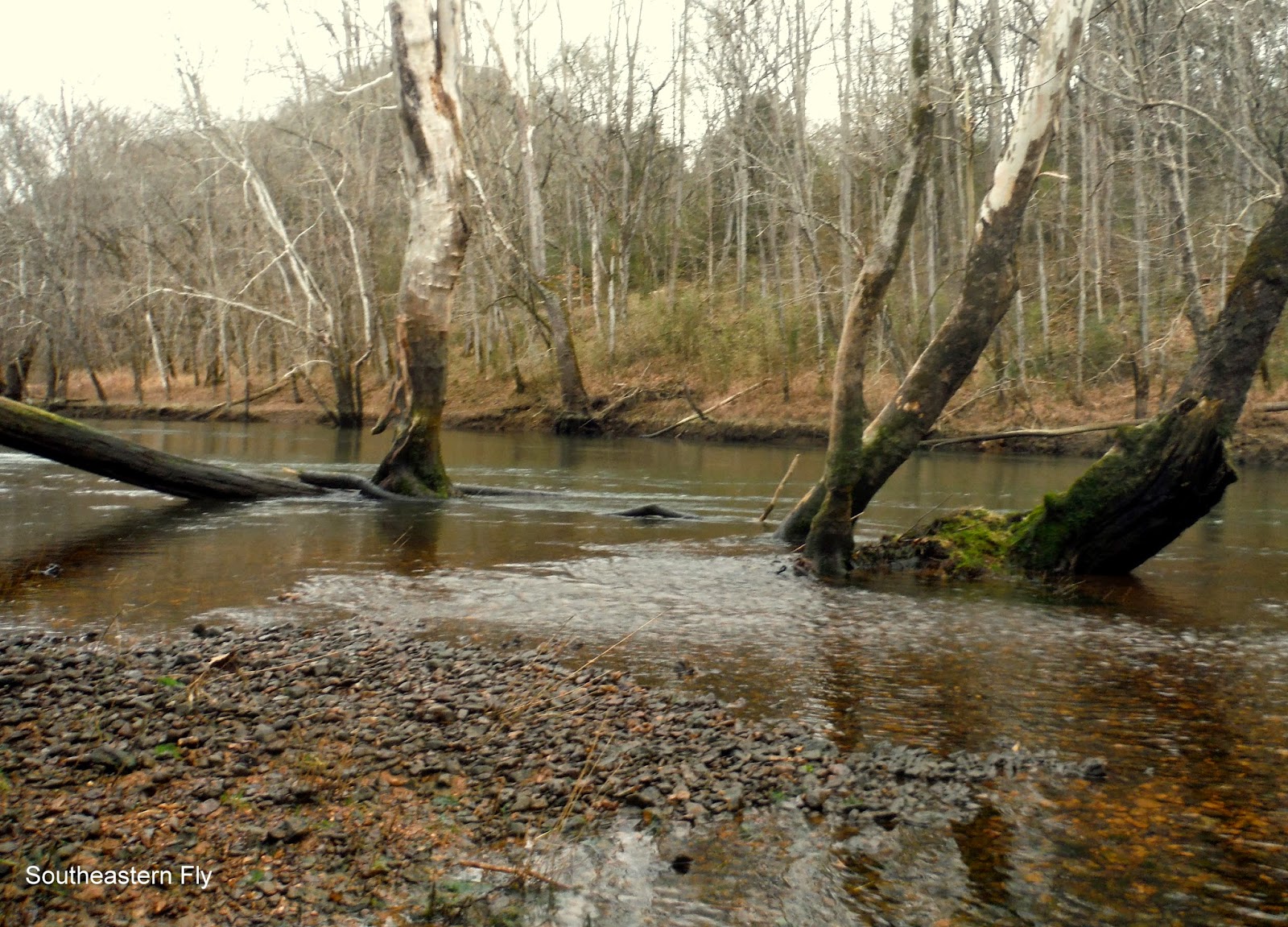