On the Reel with Rachel and Jamie

I fished the Caney with Rachel and Jamie H. who came in from Florence AL via the the day before. Their home waters are the Elk River and their report on the Elk was- lots of stockers, a cleaner river bottom and good water temperatures. This is good news for the trout and a change from the previous weeks. It seems the changes TVA has made to the water flow may be helping the river.

Thursday morning I stopped for the usual gas, ice and coffee. I stopped at new place for a biscuit and it was possibly the best gas station biscuit I’ve ever experienced. I caught up with Jamie and Rachel at their rental cabin at Center Hill Lake shortly after the biscuit. We had spoken on multiple occasions about the trip via email and it was good to finally meet them both. It is always good to put a face on a name. With that we were off to meet Dan (Shuttlemon) for our ride to the dam and the launching of the boat.

We were on the water, with the Army Corps setting a blistering pace of 4000 CFS. Rachel and Jamie picked up the streamer rods and went to work. Jamie caught a rainbow pretty quick on a Clouser and then………nothing. After that there was still more nothing. Finally, I stopped the float. We discussed the finer points of fly fishing as well as a discussion concerning the killer eel we saw earlier in the day, which turned out to be a corrugated sewer pipe floating in the current. I tied on some nymphs for falling water. At the armada of boats began their trek past us and up river to the dam, so they could catch the falling water too. Then at the Corps showed mercy and shut down the generation. Fifteen minutes later the fish began to rise and we were off with a new arsenal of freshly tied nymphs. 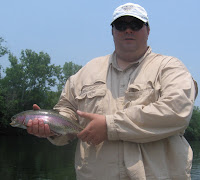 The action really turned on at where Jamie picked up his second bow of the trip. This fish was large enough to demand Jamie get it on the reel and give the fish gave the reel a drag adjustment. Jamie did an excellent job getting the fish to the boat and into the net. This left Rachel fishless, but I knew that wouldn’t last long. She picked up a nice bow 100 yards downstream. Before we could get the photo-op I dropped the fish back in the river. 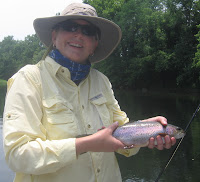 Shortly after the water level became favorable (although it never really fell out all day) and the fish turned on to our offerings. Rachel picked up a bow that she had to get on the reel, as she was fighting her bow Jamie chimed in with a nice rainbow of his own. This was the first of several doubles for the day.


Jamie picked up a brown and Rachel announced he was 2/3 to his Slam. Somewhere about this time Jamie announced it was “Good to be King” and it was game on for both of them. They both began to get into their rhythm and continued to pick up rainbow after rainbow.

We picked up a whole mess of rainbows so I moved the boat into position to try and pick up a different offering. Rachel searched out some good looking water and picked up the first brookie of the day, which completed the boat slam. Jamie also got into the brook trout action and the duo picked up the boat record for brook trout this season. Rachel caught the largest brookie of the year which is pictured in the photo. Biologists are saying the brook trout will grow about a ½” per month. Next spring we should have nice pods of large brookies in the river.

People who know me well understand I really like to fish, some folks say I would rather fish than eat. With the short window in generation I made the decision to put off lunch while the action was hot. Actually we put off lunch for so long and the fishing was so good- Rachel and Jamie decided Cheetos and Gatorade would be good and the shore lunch was called off. Some folks would rather fish than eat! They drowned nymphs for the remainder of the day.

We continued to try to stay ahead of the generation and continued to pick up rainbows and brook trout. The mission became - get Rachel the elusive slam. We extended the float and hit shoal after shoal. Rachel continued to boat rainbow after rainbow. The slam became such a passion that she actually wasn’t upset when a nice rainbow sportsman released.

Finally, the generation caught up boat and the heat caught up with us. God was merciful today and didn’t give us quite the high temps we all expected. Rachel made it 2/3 to the slam and I have never seen an angler go after something with such vigor. It was evident that she and Jamie both have a true zeal for the sport. Jamie got the Slam, and Rachel boated the largest brookie I’ve seen on the river.

On the way back to the cabin the conversation turned, as it usually does, to the number of fish caught on the day. As they debated the number I listened and finally threw out a number that may have been a little low. I didn’t have the heart to tell them I quit counting when I run out of fingers and toes. 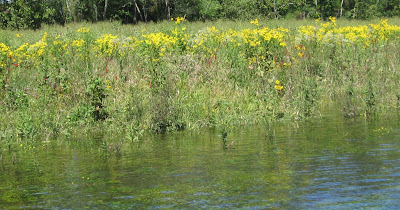