Today I fished with local artist Dan Sharley. Dan is a self taught watercolor artist from who paints fish and other wildlife. He enjoys painting freshwater as well as saltwater species and his work is spread throughout the south. He is not only an accomplished artist, but Dan can also handle a fly rod very well.

We left a little later than normal and arrived at the river approximately naturally I put a streamer rod in his hand to see how his shoulder would hold up. Dan rewarded us with a skip jack and a rainbow in the first several minutes. We dodged boats floating, trolling and regrouping for better positioning, while we searched out the best water. 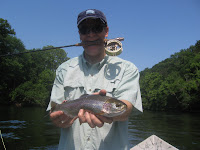 Soon we were out in front of the conga line and pounding the banks with streamers. Dan picked up a few nice fish including a nice rainbow and an equally as healthy brown trout. The generators shut off at and the water began to calm down. Then a large scum line of weeds and pollen covered the river. We switched over to nymphs and droppers and continued to bring several nice fish to the boat.

During the morning Dan picked up a couple nice browns including the one he is holding in the picture below. We continued down the river in a relatively boat free zone throwing nymphs and droppers with some success. Just before stopping for lunch we hooked up with the days only brook trout. It was a tick larger than the usual brookie, but not quite as colorful. 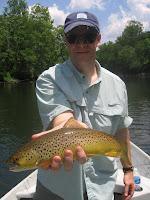 After the brook trout encounter we hooked up on a 14” brown. The brown was fighting like most other browns with head shakes and short runs, but all of sudden it got real serious about getting away. That’s when we saw a 4 foot paddle fish swim into view. We let the brown run a little line off while the paddle fish slowly cruised upstream. We got the brown in the boat and revived him, then we let it back out into the current where the fish promptly disappeared.

Following lunch we hit the water again and picked up several more fish, before the second wave of generation caught up with us. We floated into Happy Hollow picking up fish here and there.

We noticed several very large fish on the opposite bank from the ramp. So, we rowed over and saw 20-30 carp rolling in the shallow water. The carp were either spawning or playing a came of tag, but we were pretty sure it was the former. After investigating the bigger fish we rowed over to the ramp and got in line to get off the water.