After a real good Friday on the river I was back on the water again today. This time Mark S. and Brent F. from Chattanooga, TN came aboard to throw those streamers at the trout on the Caney Fork. The generation was good for this type of fishing and the temperature was as good as it gets for a February day. It started off cloudy and then cleared at lunch time. Then a change back to cloudy for a while....then just dark.

Brent and Mark can really lay the line out and it only took them a little bit of time to get used to the rods and line I had set up for today's fishing. We fished the Caney with streamers again because it had been working well over the past few trips. The river did not disappoint.

Brent started the day off with a nice brown only a short way from the ramp. Then he hooked and landed what he said was the largest trout he had ever caught. It was an aggressive brown that was parked next to some rocks on the bank. Brent did a great job on the rod and got the brown on the reel so we could listen to the drag as the fish sped down stream shaking its head. We got the fish in the boat and took the necessary hero shot. Then we made darn sure the fish was strong enough to swim away. With a couple kicks of the tail it was off back to the rocks where it all started. 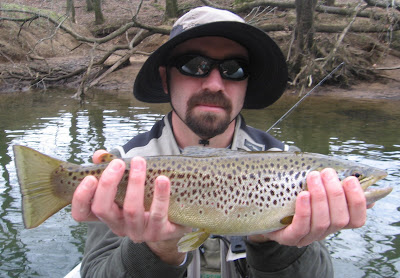 Brent's Brown...Keep That Rod Tip Down Toward The Water

No one really knows what they are going to find in the water or on the bank for that matter. And, every once in a while a fine little nugget will show up. Today was not one of those days, but we did find "a once nice" rod and reel combo in the river. There is no telling how long it has been there, but from all appearances, and with the vegetation it had gathered, the combo had been there a while. 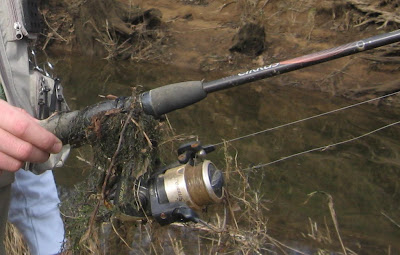 If This Is Yours Let Me Know....Yes It Still Works

Brent tagged another fish or two before Mark got into a rhythm of cast and strip. But when Mark came on, he came on big. Mark learned the value of keeping that rod tip toward the water and stripping a short while later and hooked into a nice rainbow that was holding near a downed stump. The fight was fun to watch as the fish rocketed toward the boat while Mark stripped line as fast as he could make his hand move. After a few moments the rainbow was in the net and then secured its chance for the photo-op. We told that rainbow to go tell all its friends it got it's picture taken and then released the fish back into the river. OK we didn't really say that. 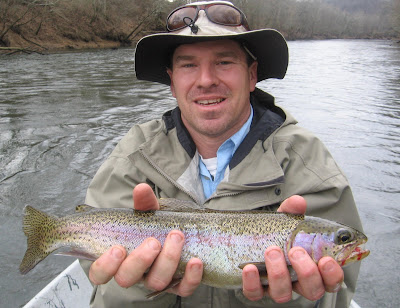 I have decided to add an addition to the shore lunch. Not because my clients demand it, not because they are good luck, but, only because dangit I really like Golden Oreos! It doesn't take much to please me that's for sure. 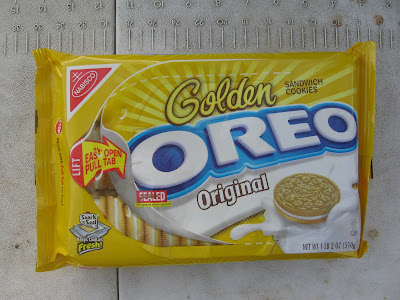 Mark and Brent were a pleasure to have aboard today. They listened when they needed to listen and they could place their flies where the flies needed to be placed. The guys boated a healthy number of healthy fish today and hopefully learned a technique that will help them with their fishing in the future.

Streamers are exiting because the fish are usually aggressive and you can watch them strike the fly if you have it at the correct depth. My plans are to continue to throw the big stuff as long as possible, but nymph and midge water levels are just around the corner.

For the next month or so the generation should give us the best of both worlds. If you want to throw streamers early and drift the bugs late we can hook you up on both techniques. 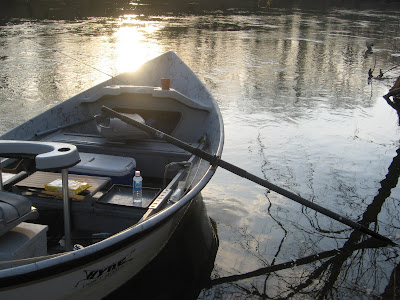