The day started off cool and windy. The forecast called for windy and warm, with a front coming through after lunch. There would be no place to hide from the wind today. 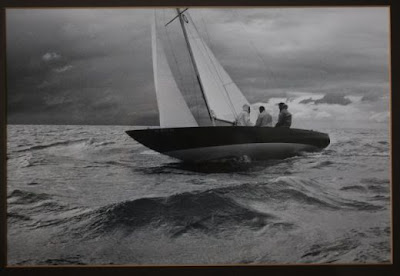 The Front Rolls In

After stopping for the morning coffee Anthony brought out his doctors note that said he was not allowed to row, however fishing would be therapeutic. I continued to sip my coffee… We launched at the dam with Anthony at the oars.

The warming trend was right on schedule as the day heated up pretty quick. Because it is February the custom in my boat is to throw streamers as long as the shoulder allows. Dan boated 4 fish in the first hour as we continued with Anthony at the oars. I was trying some new bucktails which were producing a flash, a tug and fish, but nothing to write home about. 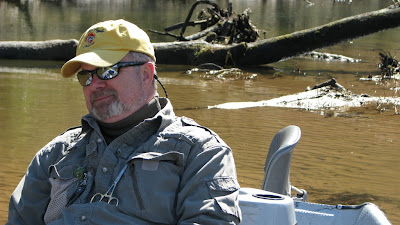 Anthony At Rest On The Oars

There were bugs on the water early in the day, which is a good thing to see in February. We are not just talking midges here either. With the wind blowing the fish were hit or miss and everyone we talked to seemed to be struggling just a little. There were a lot of boats on the river today and for the most part all were courteous.

A slow swim was the retrieve for the day as the fish seemed to be hunkered down and waiting for the front to blow through. Swimming the Fly- (definition) Feeling the fly in the tip of the rod as you strip or swing the fly.

From observation only: It doesn’t matter which type of strip you prefer, whether the jerk strip, a slow wrist strip or a full on strip with the sweep of your arm, always try and keep some contact in with the fly in the tip of the rod. Predatory fish do not like to see prey-fish fall. We’ve been choosing flies, for the most part, that flutter and rise when stopped. Several times throughout February and really since the beginning of this streamer season the fish have taken advantage of a fly that has stopped the forward progression and began to flutter to surface.

I ran through the color chart pretty quick with white winning the day. Yellow worked for the most part on brookies and an all natural Matuka rounded out the day and one of the many slams. Bucktails and Marabou are really a great way to fish.

Just for kicks and for shoulder relief, I drowned a nymph/ midge combo. Within 20 feet of the first drift a rainbow took the Dan-O-Magic that was hanging just below a BHPT. This tells me the fish are still keyed into bugs. The 5 wt went back into the rod holder and in favor of the 8 wt I had been throwing all day. 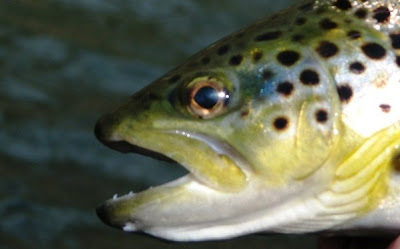 Perspective-(definition) one's "point of view”. Everyone wants that “big fish” and everyone wants to be a “trophy hunter”. I have to admit it is a lot of fun to catch those bigger fish. The fight with the bigger fish is a challenge and the accomplishment makes for a great day. If you’ve been watching On The Rise you see the crew traveling all over the country chasing trout. For the most part, except for their upcoming episode, Frank is catching normal size fish. He is not hooking up on fish much bigger than the 15-16” and sometimes is happy with an 11” trout. Over the past couple of months I have noticed a trend, both in my boat and from conversation within the fly fishing and even the bait community. After catching bigger fish it seems difficult to appreciate a 14-16” trout. It is funny to me how later in the year, after the weather warms and traffic on the river gets back to 40 and 50 watercraft and just as many waders, we will be saying those 16” fish make our day. I guess it is all relevant to the time of year and sometimes how hard the wind is blowing…