It was cold Sunday morning as we pushed off from the ramp. The moon was just coming off full and the skies were as blue as the typical February day would allow. There was not a threat of rain; however the weather guessers had called for clouds. The clouds weren’t there when we left the ramp, so we thought our plans of throwing streamers may need to be changed. But, it is important to stick with a plan, if you have a plan, and today the plan was to throw buck tail and marabou.

It was cold Sunday morning as we pushed off from the ramp. The moon was just coming off full and the skies were as blue as the typical February day would allow. There was not a threat of rain; however the weather guessers had called for clouds. The clouds weren’t there when we left the ramp, so we thought our plans of throwing streamers may need to be changed. But, it is important to stick with a plan, if you have a plan, and today the plan was to throw bucktail and marabou.

David K. and Anthony were on the boat with me and I decided to test out their arm strength over a long day of eight weights and hopefully bigger fish. There were several things I wanted to try and these two can cast well enough and know how to fish well enough to try some different things.

We dug into the bag of tricks early and began throwing some tandem rigs. We tried a couple different colors and some rigs with the same colors. That seemed to work well early on, but as the float continued we decided to concentrate more on color and technique than on the number of flies tied to the tippet.

There are a lot of things that seem to matter when fishing streamers. We have heard them before: the right cast, a quick strip, a slow strip, look for rocks, and don’t look for rocks. It can get confusing, but the rewards can be great if you stick with the plan.

Swimming the Fly- (definition) Feeling the fly in the tip of the rod as you strip or swing the fly.

Over the past several floats I have been concentrating on how to fish different patterns. Brent and Mark learned last week. Anthony and David K. produced fish this week. A Matuka should be fished completely different than a Clouser. This is not to say either fly is better, just different. My newest term….well new to me anyway is “Swimming the fly”.

Anyway back to our day. We caught several good fish on several different patterns. Yes I did get my turn in the casting brace and yes the brown was a nice fish. Part of the excitement about streamer fishing is the flashes, the follows and the visible takes on the fly. 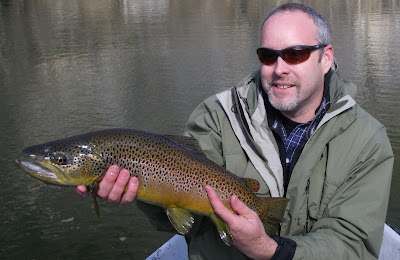 The River Will Hold A Surprise Or Two

The brown above came up from the bottom and hit the fly in a position within the water column that I couldn’t see. When the fish hit the fly, I gave a little more insurance with a strip set on the rod and then the fish went to the bottom to eat its prey. After several tugs and headshakes the fish began the process of trying to break loose by going under a log in the river and shaking its head against the bottom some more. Anthony dropped the anchor to stop our descent downstream while the fish and I continued our game of give and take. Finally, the fish stopped moving for a long enough period of time that we thought it may have been wedged under the log for good. The only thing left to do was stick the rod straight down in the water and give a few tugs, which I hoped would break the fish free and we could play another round of tug. I must have looked funny leaned over the side of the boat with the rod stuck down, in the water, almost to the grip. Finally the fish came out from the log, made a short run and then started coming to the boat. This fish would make runs that took a little time to get up to speed, similar to a locomotive pulling from a stop. A couple short runs later from the fish......with me switching the rod position to apply side pressure, the fish came to the net.

We spent quite a while reviving the fish in the net, then outside the net. When the fish made the decision to leave it only took a couple of kicks from the big tail to get up to speed and back to the bottom it went. A friend of mine had given me a fine Cuban cigar and the only thing left to do was to light the cigar and enjoy the moment. 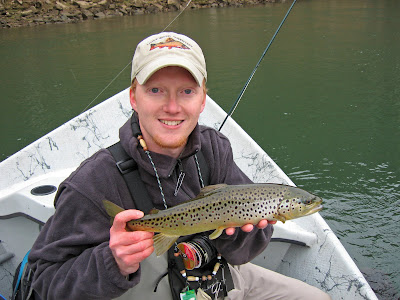 David K With Yet Another One Of His Browns

David K. is an accomplished nymph and midge fisherman. He tied up his nymph and midge rod and we soon got into some dead drifting action under the indicator. With David K. on the dead drift and Anthony still throwing the streamers we cruised through some nice water. David K. hooked some fish on his rig, but soon was back on the 8 weight lobbing those three inch morsels to the trout in the . 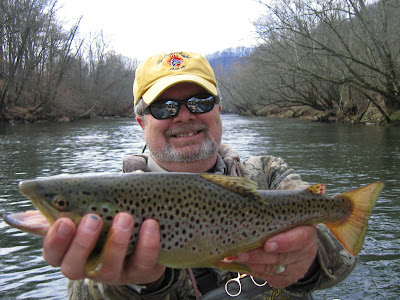 Anthony Gets His Shot With A Nice Brown Trout

I have to say that Anthony has become one of the better streamer fishermen I have seen in a while. He’s not Kelly Galloup, but he boats more fish of size in a trip than most folks boat in two trips. This is why he will be working diligently on his rowing techniques for awhile. 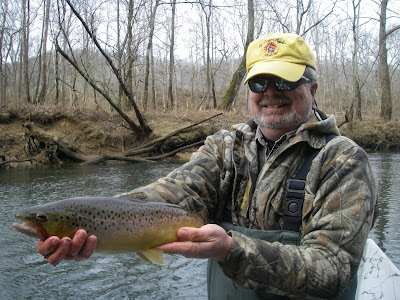 Anthony Gets His Shot With Another Nice Brown Trout

If you want to catch some healthy fish it is a good time to be out on the water. Be careful when wading, because there are some boats on the river who don’t always understand how a wake affects a wading fisherman.

For those who are considering booking a trip, the past several trips have been good and people are seemingly satisfied with their choice to fish over watch TV. We can fish some nymph rigs and sometimes that is a good thing to slow the pace of life down. If you want to fish streamers and throw some marabou the next two months have historically been great days to be on the river. 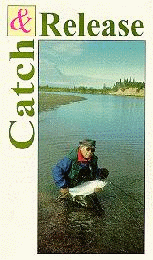