During the first day of floating we did manage to drown a few nymphs. BHPT's and sow bugs worked best. Gary was throwing his newest rod, which was a St Croix that he built himself. This rod added an easy 20 feet to his cast. 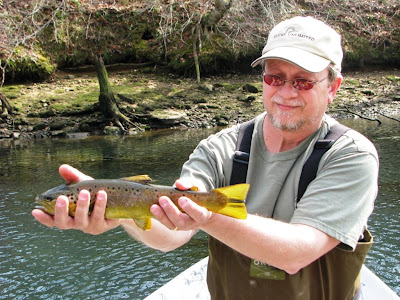 Gary's First Fish On The First Rod He Built Himself

The browns in the Little Red River are something to behold. Yes, there are some that were much bigger than we are showing here. But these are some of the most colorful fish I have seen in a while. Check out the tail color on the one above. 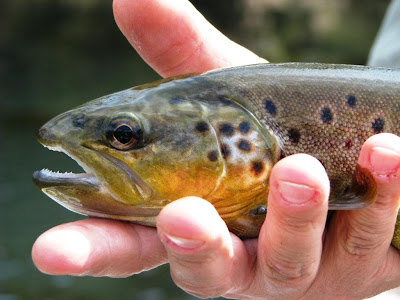 This Brown Was Fooled By A Nymph

Nymphs and sow bugs were the flies of the weekend. We drifted them below indicators, between wind gusts. Almost every nymph we tried brought fish to the boat. As long as we could get a clean drift, usually in the more swift water, we could hook up. But, if the wind grabbed hold of the line or the indicator, or both we couldn't even hook-up on a trash fish. Like I said before larger fish were taken on marabou and bucktail, which is our favorite way to fish. 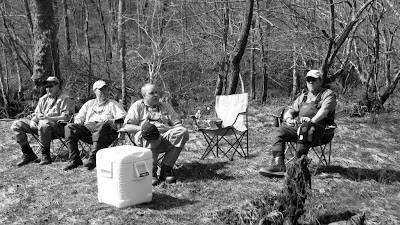 Sometimes the best fish of the day comes just after dark. On the long float as we were rowing out, below John's Pocket and above Winkley Shoal, we hooked up on a fish that felt to be one of those large browns for which the Little Red has become famous. The big stuff was working and when we return we will have an even larger arsenal of big flies to offer up. When we finally got the fish to the boat it was a slightly over-sized brown, but not that 40 pounder we were looking to catch. Once we un-hooked and released the fish we resumed the long row out. 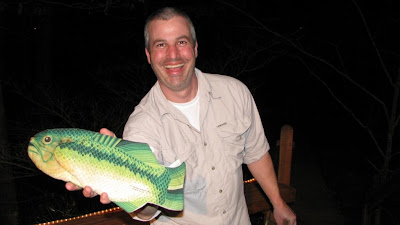