Fly Fishing the Caney Fork with Brian, Stan and This is Fly

I had enjoyable time guiding Brian Hodges and his father Stan, who booked a father & son outing on the , to fly fish for trout and other species.

Brian is an Editor for This is Fly (TIF) and is also a fly fishing travel agent who books fly fishing travel to locations in the and abroad. Brian had been in for a few months and was referred by a friend and client. As we spoke over the past several months Brian decided to sample the Middle Tennessee waters. He booked a trip for himself and his father on the , as a send-off before Brian and his wife headed back to for the summer.is an online fly fishing magazine with a more edgy flavor. I recently had the honor of contributing to the latest edition of TIF for an article named "What the Doctor Ordered" (page #31).

We launched the drifter and started the morning with blue gill. Then moved to my favorite back eddy where Stan promptly caught the largest TN Tarpon of the season. When the Army Corps shut down the generator we were headed down river and picking up the recent stocker browns and rainbows. We missed the TWRA shipment of fish by mere minutes and were too far downstream to partake the TWRA offerings with the dry flies. But, we had the nymph rods loaded and were seeing, catching and on occasion even missing a few of the usual suspect browns and bows. 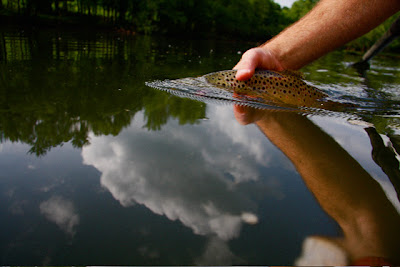 A Caney Brown Just Before Release

Usually I will ask anyone who books a trip, and needs to use our gear, if they will need left or right handed reels. Brian had assured me he and Stan both were right handed. Halfway through the day I noticed Brian, while occupying the rear seat, was casting with his left hand. He had been laying out 60 foot + casts all day long and this cast, which I caught out of the corner of my eye, was no different. I quizzed him on his left hand casting and he replied “my right arm got a little tired so I changed to my left hand”. A short time later we boated a largemouth as a prize to Brian’s left hand cast. If you haven’t tried casting with the opposite hand of which you normally cast, I would encourage you to do so….after you finish reading about their day.

Lunch this trip was Cedar Plank Smoked Salmon with potato salad (hey we are in the engaged in good conversation concerning the booking of travel, exotic fly fishing destinations and shore lunches. We set the groundwork for a possible Southeastern Fly Friends and Clients trip to a very well known lodge out West. There will be more on the trip later.

We had fished mostly falling water throughout the morning and had brought a buffet of species to the boat. But, that one nice brown, we seek on each trip had eluded us so far. Brian and Stan began to call the browns with the six weight rods and sinking lines. The flies of choice were big nasty streamers in a variety of colors. Both anglers had several flashes and a couple of hits, but still no nice brown to end the trip. Finally after several misses and lots of flashes Brian boated the brown of the day. Immediately Stan requested a white streamer similar to Brian’s offering.

We tied on the “sure thing go to fly” and Stan picked up another largemouth. Then literally with only feet to go before we had to cross the river to get to the ramp, Stan boated his brown trout to round out the day. The discussion turned to fourth quarter with only seconds to go. Both Stan and Brian had caught their browns just before their dinner reservations were to be caught back in . 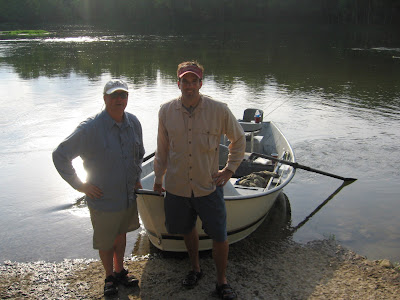 Stan & Brian at the End of the Day

To contact Brian concerning fly fishing travel shoot him an email at brian@thisisfly.com

The , as most of you know, suffered somewhat over the Big Spill. However, we are still catching fish although not in the numbers as we were this time last year. We will be floating the later in the week and I will provide a report about that after we return. But, all reports are the Elk is fishing as the Elk should fish this time of year. Stay tuned for an explanation of that statement later in the week.

Please feel free to email or call if you want to discuss the current conditions of the Middle Tennessee Rivers or to book your trips. We are finding some rivers are fishing better than others, but all of them have fish that are waiting to be caught.