Fishing Report for the Caney Fork

eportI pulled Dan S. away from completing his most recent Brook Trout painting (but I did see a photo of the progress) and we hit the Caney for an afternoon of fishing with six different rods. We started at the dam and picked up the usual stockers on nymphs. The clouds and the high winds blew into Buffalo Valley as we dodged the usual fishing lines and canoes. Very early in the trip Dan brought a nice surprise to the net among the bait fishermen. For this nice surprise we received a few hard looks from some of the locals. 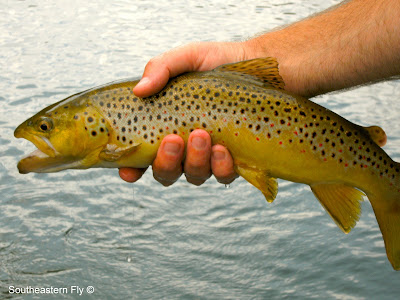 The First Good Brown of the Day

It was my turn to take the front casting position. We pounded the banks with a nymph/midge combo and sight fished to some browns. After a few drifts, through a nice slot, the indicator dove to the bottom (a diving indicator is something that cannot be taught). We had a good tug of war with a nice brown. Finally we got the brown out of the stumps and limbs, then it came out into open water, and the fish came to the net. I still wanted to catch a nice fish on top water, after last week’s trip with Glenn that produced those nice browns. We pounded the banks and after several misses I picked up a brown. It felt like I spent all day watching that bug, but the time I spent watching it probably wasn’t as long as I thought.

"Trout Will Rise to a Cigarette Butt"

We took turns throwing some soft hackles at shoals. We didn’t pick up a double or triple on the soft hackles, but we both picked up a few on the emerging imitators. I haven’t fished soft hackles much this year, only a time or two. This time I rigged a 9’ TFO that has a soft tip to help with the action. We were trying a new set up on soft hackles, which produced fish in the more shallow areas of the river. It did not produce fish of size but it did produce some good numbers for the short time we offered the tasty morsels. 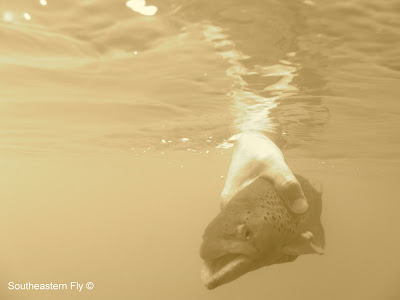 This year we’ve noticed more caddis hatches than any other year I can remember. They have still been infrequent this year although there are more of them than usual. This time we found a swarm of caddis in some slack water, buzzing around erratically under an overhanging limb. I assume they were all trying to find another attractive caddis to continue the life cycle of a bug, but, without a flashing motel sign, how can anyone be 100% sure. I was throwing streamers at the time and could not bring myself to switch back to top water.

A few minutes later I brought a brook trout to the net on the white streamer. The brookie was just beginning to get what appeared to be its fall colors. With geese gathering and the fish getting their colors, it looks like fall may be just around the corner. The other piece of the puzzle is that Gary W. just called and told me his maple trees are starting to turn color, which is a sure sign of an early fall. 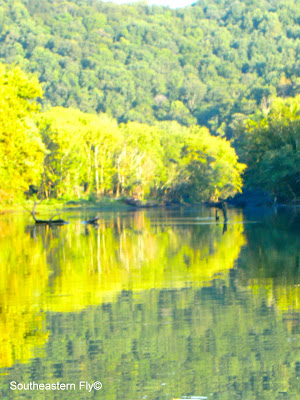 Dan Took This Photo at Just the Right Time

Shouldn’t He Be Rowing…

Dan says he has endured a few sparse trips of late, both on the river and around home while wading. On this trip it seemed every time Dan put his bug on the water it produced a trout and even a blue gill once. Dan had another long drift going in the middle of the river and popped a nice brown for his effort. This wasn’t a big deal except he was also rowing at the time. He was supposed to be rowing and instead he caught My Fish! But I am not bitter… 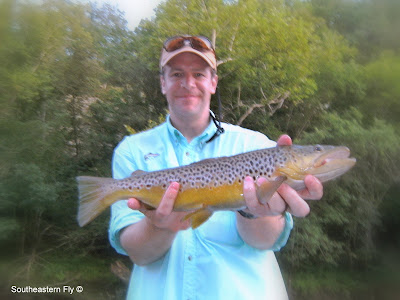 The light was getting low and so were the air temps. We were closing in on the ramp with no one in sight. A loud noise came from between the boat and the bank. I didn’t even have to turn around; I knew instinctively, Dan had another fish. This time it was an even larger brown. We switched positions and I began rowing as Dan moved into the front casting brace. The brown took him around the boat as we discussed the size of the fish. We positioned the net, Dan brought the head of the fish up, but this fish didn’t want to give-up yet and took off for another run. Finally we got the boat in position, the fish in position and the net in position and the brown came quietly. This fish finished our evening and we both counted the day as a good one. 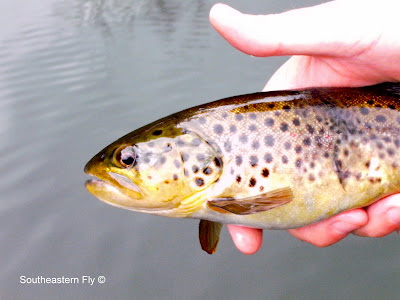 Has This Brown Been Tagged by a Heron or Osprey or Something?

We Pulled into Happy with a sore shoulder and cold feet. Thank God for a great heater in the truck! Dan thanks for putting me on the fish, but next time it is my turn to row and fish! 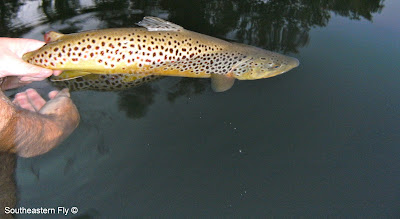