Mark and I took a Sunday float on the Caney Fork. After returning from the Watauga last week and hitting the local streams for some white bass, I was ready to get back to the Caney for some more trout. A lot of people are saying the Caney is not fishing well and I will say there do not appear to be as many fish in the river as the past few years. But, there are fish in there, however angler's have to work harder to find them and make sure everything is just right with the gear to take advantage of all the "shots" that are offered.

The Prize
Mark and I also had a bet on 'when the water would hit us in the float.' The bet was easy, it was the bounty that was a little more difficult. But, with 30 minutes left in the drive to the river we decided the winner of the bet would pick one fly from the other's fly box. Selecting the fly seems easy, but just think about it a minute...would the fly that catches the largest fish be the best fly,the fly that costs the most, or the fly that the guy likes the best, be the fly to choose?

When the water hit I started looking at the flies in Mark's fly box. Never have I took such an interest, however now was my chance to select the fly with the most potential, or the highest cost... (Yes I am bragging because I won the bet, come on I don't win bets that often) 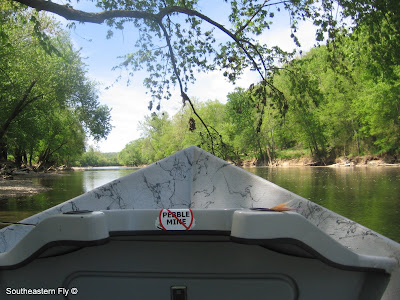 There has been much speculation about the whereabouts of the stockers. The fish are in the river, but there do not seem to be as many. Mark struck first fish using a nymph under an indicator and when we found the hatchery brats we found several. The trout were responsive and this is the first float, I can remember in a while, that water was clear enough to actually see fish. 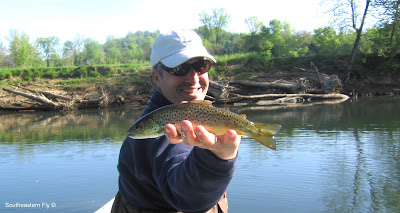 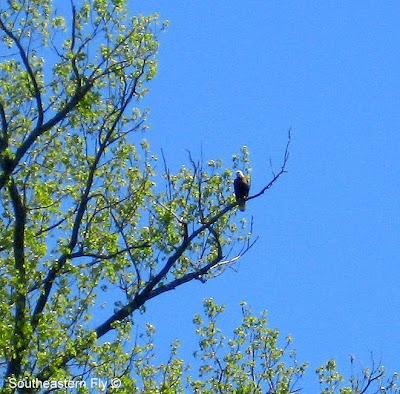 The Eagle Keeps a Lookout
For the fourth fishing trip in a row we saw an eagle. From the last Caney Fork float, to the Watauga trip, to the local stream and back to the Caney, the eagles are around, if you keep your eyes peeled. We also saw osprey and turkeys on this trip too, which both came later in the day. Nothing compares to the eagle. 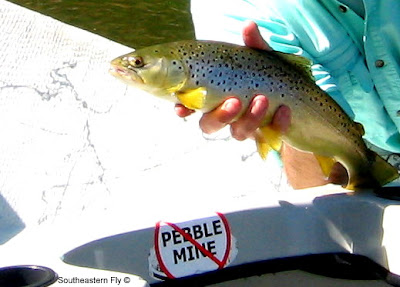 We decided to pick through a few holes and see what was holding. About this time last year or maybe a little later there were white bass (stripe, rockfish, hybrid) in the river. This year we have been able to find them in more concentrated areas. These fish are a lot of fun and when one is found more are sure to be close behind. We threw the streamers at these fish and they responded with a hard charging side pulling fight that put most of the fish we caught throughout the day in the lightweight bracket. 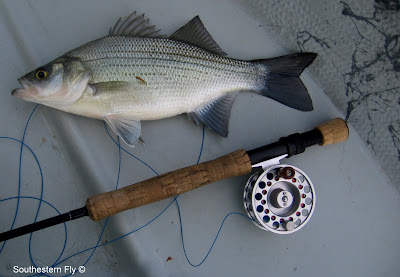 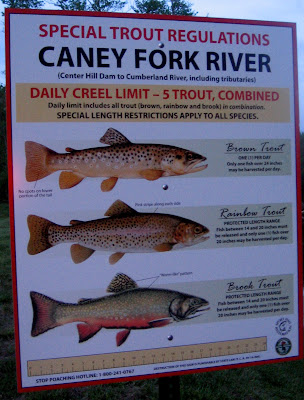 Reminder of the New Regulations with Nice Graphics 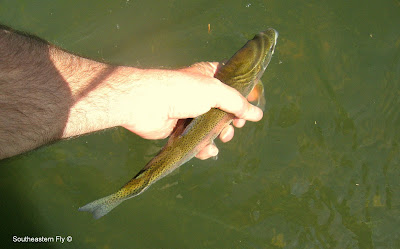 The Pink Stripe is Noticeable on This Stocker 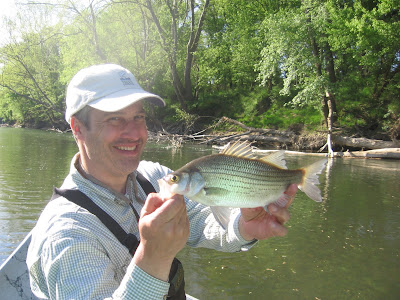 Mark With One of the Many

Keeping an Eye on the River

So, the day began and came to an end. If you have read this far down through the pictures here is a summary...for those who didn't read this far down, they will not know the difference.
We caught fish on nymphs, but midges did not produce as well as expected. The streamers caught the biggest brown, some rainbows and of course the white bass. We did not see or catch a brook trout all day long on anything. The water clarity is the best I have seen all year and this is encouraging. The birds are out and the birds of prey are certainly something to behold. They really are amazing!
On the ride home I remembered the bet and the bounty. I pulled off an exit, rummaged through the back of the truck and found Mark's fly boxes. I went strictly for price on the choice, that and it is a streamer (Hi my name is David and I am a streamer junkie). Mark was a good sport and I can't wait to catch a big brown on his fly...heck I just can't wait to catch another fish period. 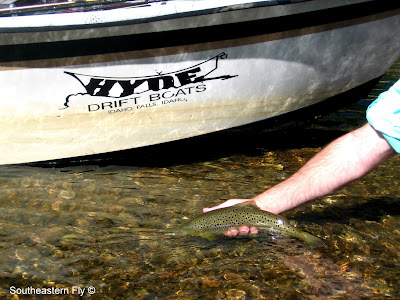